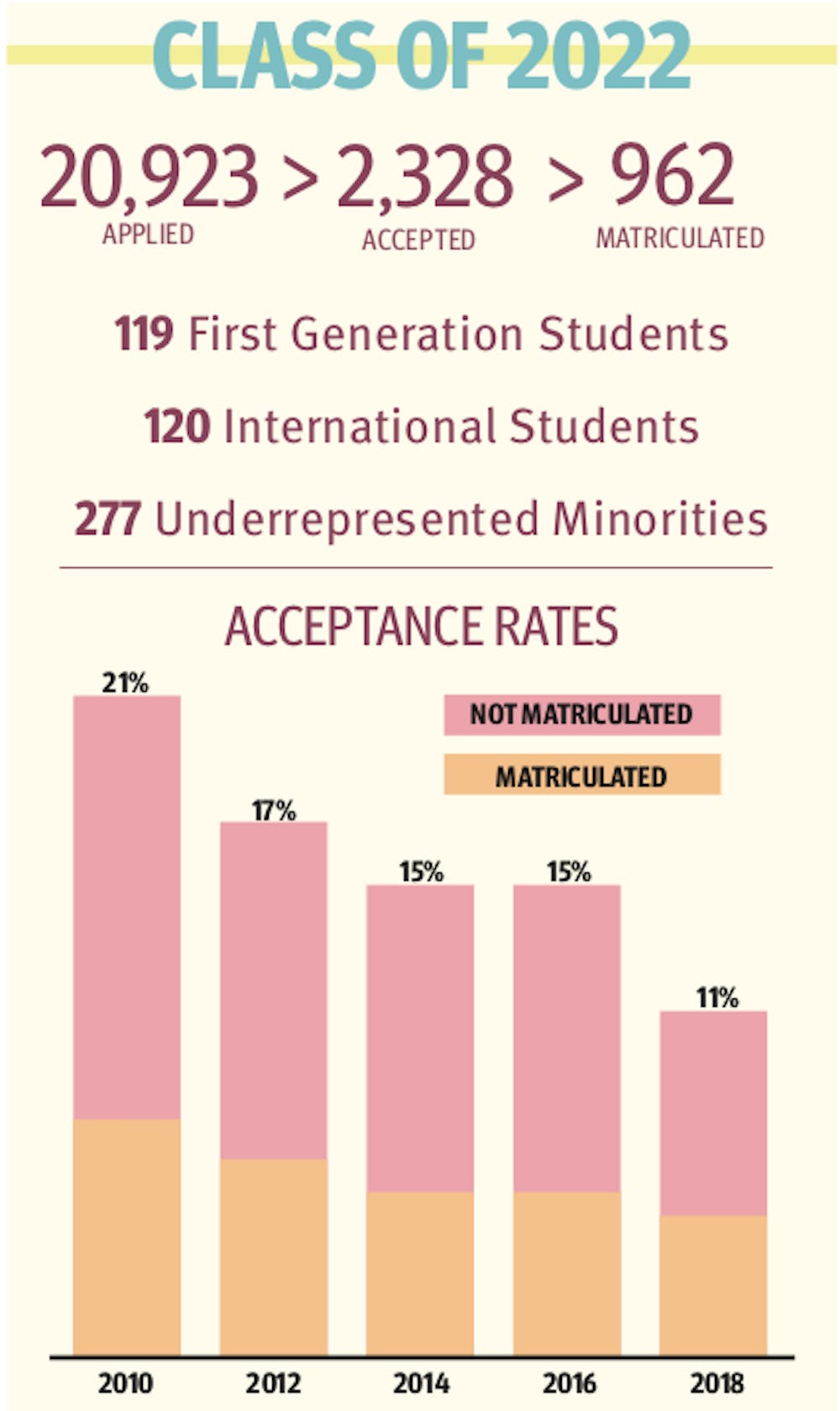 The newest class of Rice Owls, the most selective class in Rice’s history thus far, marched through the Sallyport to complete their matriculation last week. With an admission rate of 11 percent, the undergraduate class of 2022 was selected from an applicant pool that exceeded 20,000 students for the first time in Rice’s history.

“Rice remains an incredibly appealing institution,” Romero da Silva said. “I think we are just seeing an increasing awareness of the Rice experience and undergraduate education and what it offers to students. It was great to see these increases across the entire applicant pool including all schools, domestically and internationally, and across socio-economic backgrounds.”

With the target class size set at 945, only 2,328 students were given offers of admission with 962 matriculating, compared to 2,864 students admitted to the class of 2021. Additionally, a greater number of students were admitted in Early Decision than the previous year, resulting in a more competitive Regular Decision stage.

The increase in applicants, according to Romero da Silva, may also be a result of changing SAT subject tests from a requirement to only a recommendation last year. Romero da Silva said that there were also increases in applicants through both QuestBridge and the Coalition for Access, Affordability and Success program, which Rice joined for the previous admissions cycle. The Coalition for Access, Affordability and Success aims to increase application access for historically underrepresented groups.

Moreover, this year’s matriculating class yield rate, the percentage of admitted students who enroll, reached 41 percent, notably higher than the yield rates of the past five years, which ranged from 34 to 38 percent. Romero da Silva said she aims to identify students who “get Rice” based on their application and are more likely to enroll if admitted.

“When I am reading an application, I want to hear a student talk about why the Rice experience is meaningful to them,” Romero da Silva said. “At the end of the day we want students who will say ‘yes’ if admitted.”

Akin Bruce, former director of the Student Admissions Council that manages on-campus recruitment events, said that increased applicant interest may be a result of Rice’s recent rise in national rankings.

“We’re becoming more popular in general, so more people know about us and as a result find out that we’re actually a pretty good school,” Bruce, a Lovett College senior said.

“The admissions office has actually been trying to figure out how to deal with too many students for our admitted students days.”

Lila Greiner, a Will Rice College freshman, said she found out about Rice in December of her senior year and applied on a whim.

“[A college counselor] suggested Rice, which I didn’t know anything about, but I decided to apply because on paper the academics looked amazing and I like warmer weather,” Greiner, who is from Alexandria, Virginia, said.

Despite the surge in applications and matriculants, Vice President for Enrollment Yvonne Romero da Silva said the offices of admission and enrollment were equipped to evaluate all 20,923 applicants using the new committee-based evaluation method she brought to Rice.

Now all 20 members of an admissions committee should be able to view any part of the application at the same time and discuss factors of the application in greater depth, such as the strengths and contexts of different components like teacher recommendations and essays, according to Romero da Silva.

“It is a more dynamic evaluation experience than just an admission officer sitting with an application taking notes,” Romero da Silva said.

In the recent months, the Office of Enrollment has made changes including redesigning the admissions website, appointing Julie Hite as the new assistant vice president and director of admission and creating a new team solely dedicated to creative marketing strategies, according to Romero da Silva.

“Brochures used to be the only way students got information about a university,” Romero da Silva said. “We need to find better marketing tools to get information to students in ways that may feel more organic and genuine. It’s our responsibility that students who are good candidates for Rice are learning about it.”

Romero da Silva said analytical research revealed that there is still progress to be made in expanding Rice outreach efforts to specific areas and demographic populations where there is limited awareness of Rice’s undergraduate programs.

“We found that people who haven’t been to Rice have a very stagnant impression, and once they visit, their impression almost quadruples,” Romero da Silva said. “We might be smaller and newer than other places, but what we have here is truly remarkable and we think more people need to know that.”

Greiner agreed that visiting campus for admit day and interacting with students and faculty “sealed the deal.”

“Throughout the day I noticed myself smiling more and more, and when my dad and I left the last speech I told him I knew I wanted to come here,” Greiner said.