ASTROWORLD brings listeners on the rollercoaster of Travis Scott’s mind 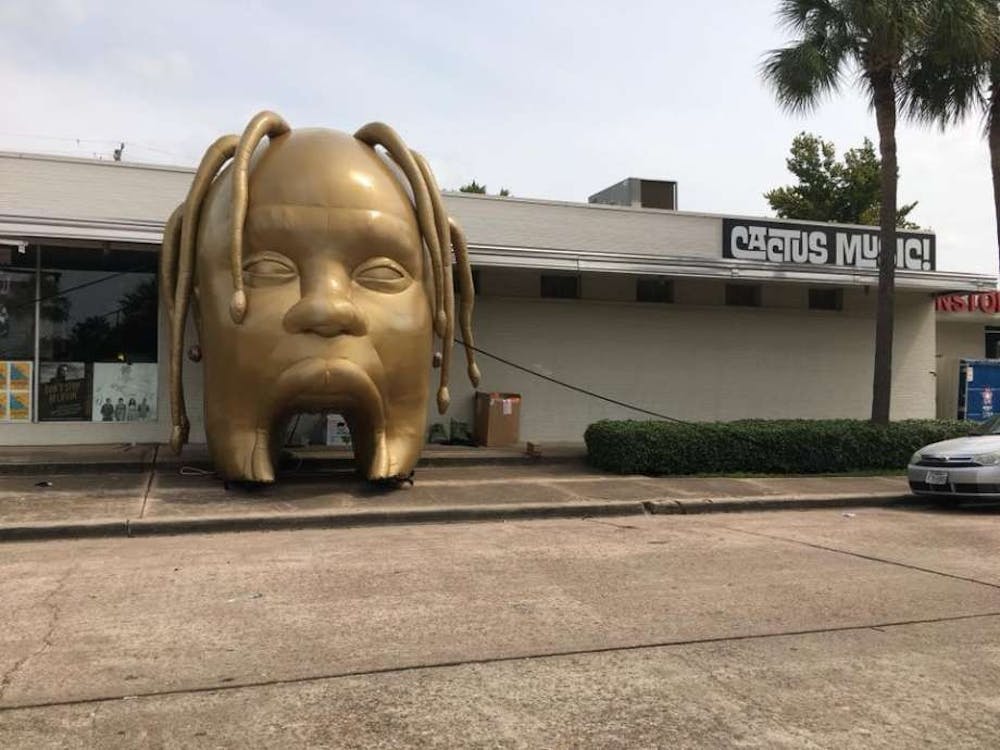 One of the golden Travis heads was seen outside of Cactus Music Records. It has now been moved to Screwed Up Records. Courtesy Chron.

One might find a giant golden head by the roadside jarring, but Travis Scott finds it the best way to introduce an album. Eccentric, moody and fresh, his third studio album matches the bold statement of that introduction and exceeds expectations. After much anticipation, “ASTROWORLD” is finally here.

The excitement surrounding “ASTROWORLD” began nearly two years ago when the Houston-based rapper announced that the project would succeed his 2016 album, “Birds in the Trap Sing McKnight.” Such prolonged anticipation left many worried that Scott would be unable to deliver on the hype surrounding the album. However, contrary to the fears of his doubters, “ASTROWORLD” builds on the success of Scott’s previous albums, “Rodeo” and “Birds in the Trap Sing McKnight.” The eclectic sound of the album owes to the musical influences of Scott as well a production team that ranges from Tame Impala to 808 Mafia. The ethereal sound of songs like “STOP TRYING TO BE GOD” balance the hard-hitting trap sound of songs like “STARGAZING,” all while the album delivers an up-and-down journey of Travis’ experiences as a maturing artist.

“ASTROWORLD” is a clear homage to the city of Houston, which the Missouri City-raised Scott has always professed as his hometown. The album’s title is derived from a former Six Flags theme park of the same name located in Houston. AstroWorld was opened in the late 1960s and was situated near the Astrodome and NRG Stadium until 2005, when it was closed. In the weeks leading up to the album’s release, gigantic golden inflatables in the shape of Travis Scott’s head were placed around the U.S., reminiscent of the entrance to AstroWorld’s “Texas Cyclone” roller coaster. The golden Travis head would go on to be the centerpiece of the “ASTROWORLD” album cover. Scott attributes the park’s closure to the moody and at times angry sound on “ASTROWORLD.” As Scott told British HQ in 2017, “They tore down ‘AstroWorld’ to build more apartment space. That’s what it’s going to sound like, like taking an amusement park away from kids. We want it back... That’s why I’m doing it. It took the fun out of the city.”

Other Houston tributes spread throughout the album include that to famous native DJ Screw on the song “R.I.P. SCREW.” Before the rise of a newer wave of trap stars like Travis Scott and Maxo Kream, Houston was widely recognized as the home of the influential chopped and screwed music style, a DJ technique created by DJ Screw in which a song is slowed, then scratched and skipped multiple times throughout, inducing a feeling of intoxication. The style was continuously used by Houston legends like Paul Wall and UGK, and expanded to mainstream use over time. On his Beats 1 show .Wav Radio following the album release, Scott praised Screw for his unique work, saying “DJ Screw is the sound of music.” Accordingly, Scott’s discography has shown this influence throughout his career, especially here in songs like “R.I.P. SCREW” and “STOP TRYING TO BE GOD.”

There were many features on the album, but despite this, Scott was always the one in control of each song. It was because of this that the album actually felt like an amusement park, as was intended. Each song is a ride, and each ride is different. Every feature feels perfect because Scott mixes his dark, ominous production with whatever style the featured artist is known for, uniting slightly similar, yet unique attractions under one exciting carnival. The enigmatic Frank Ocean emerges from a post-Blonde hiatus to ride the “CAROUSEL” early in the album. The Drake-Tay Keith combo that gave us “Nonstop” lunges from the shadows of a haunted house in “SICKO MODE.” The Weeknd, Pharrell Williams and Kevin Parker of Tame Impala co-star on “SKELETONS” for a psychedelic-trap ferris wheel ride produced by Tame Impala themselves. This theme is apparent even through the last song “COFFEE BEAN,” which is noticeably calmer and more contemplative than the rest of the album, feeling as though the listener has reached the end of a day at the amusement park, with all energy spent and a mind focused only on recounting the day. The whole of the album feels as though Scott has introduced each thrilling aspect of his life in rapid succession, closing by crashing after the high and confronting the reality of his life.

One of the most impressive aspects of the album is that amid an increasingly streaming-focused music culture, in which artists create albums often too large to maintain quality throughout (e.g., the 24-song, nearly two-hour Migos album “Culture II”), Scott’s 17-song project feels like it has no throwaway tracks. “AstroWorld” brings to a close the stylistic development and climactic procession that began with mixtape “Owl Pharaoh,” and is a more than impressive conclusion. As Scott proclaimed on the song “WHO? WHAT?”: “Ain't seen the best yet? Open up your eyes”.