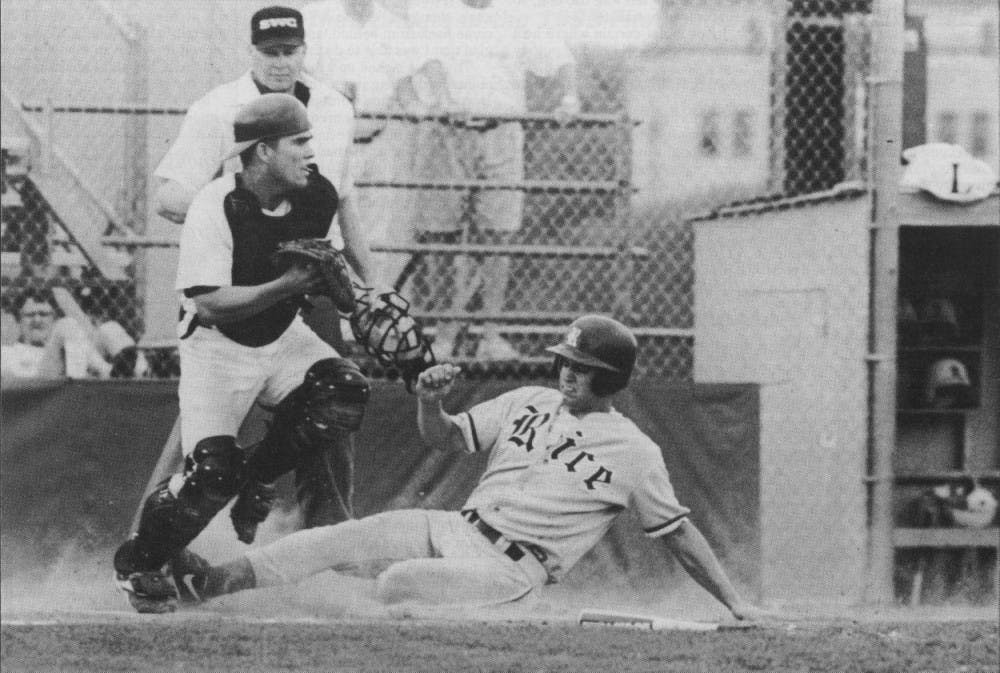 Photo by 1994 Thresher | The Rice Thresher


Lance Berkman slides into home during his freshman year in the 1995 season. Berkman, who recorded a .385 batting average, 67 home runs and 272 runs during his Rice career, was named to the College Baseball Hall of Fame on March 4. Berkman, widely considered to be one of Rice’s most-succesful athletes, will be inducted into the Hall along with seven other former players. The induction ceremony will take place June 28-29 in Lubbock, Texas.

The Wayne Graham era came to an end for Rice baseball with a 9-8 loss to Florida Atlantic University on May 26. With that loss, the search for Rice’s new head baseball coach began.

Multiple reports indicate Rice is hoping to name a new baseball coach before the College World Series, which begins on June 16. That leaves two weeks for Rice to conduct its head coaching search. With that in mind, here are some names to watch out for throughout the process.

According to Mark Berman of Fox 26 Houston, Rice has already brought in Texas Christian University pitching coach Kirk Saarloos for an interview.

Saarloos has been a college baseball assistant since 2010. He spent his first two seasons as a pitching coach at Cal State Fullerton before moving to TCU in 2012. The Horned Frogs had appeared in four consecutive College World Series before this year, when they missed the NCAA tournament.

In addition to his duties as pitching coach, Saarloos has been TCU’s recruiting coordinator since 2013. He was named the nation’s top assistant coach in 2016 by D1Baseball.com. Under his watch, TCU’s pitching staff ranked No. 1 in the nation in earned run average in 2014 and No. 2 in 2015.

Rice fans may recall Matt Riser from the Owls’ seven games against Southeastern Louisiana University over the past three seasons. Rice took on the SELA Lions, coached by Riser, in both the 2016 and 2017 NCAA Tournament regionals. Riser has served as the Lions’ head coach for five years, compiling a record of 194-108. Just 33 years old, he has led Southeastern Louisiana to three NCAA tournament berths and two conference championships in his five seasons.

Paul Janish spent this season as an assistant coach on Wayne Graham’s staff at Rice. It was his first year of coaching following a 13-year professional career, during which he played infield for three different major league teams. Janish played for Rice from 2002 to 2004 and compiled a career batting average of .313. He was the starting shortstop on the Owls’ 2003 national championship team.

According to Graham, Lance Berkman allegedly began campaigning for the Rice head coaching job well before the athletic department decided not to renew Graham’s contract. Berkman won the 1997 National College Player of the Year Award while playing for the Owls, leading them to their first ever College World Series appearance. He then spent 15 years in the major leagues, including 11 with the Houston Astros.

Berkman currently coaches high school baseball at the Second Baptist School in Houston. In his first season in 2016, he led the school to the 4A Texas state title. The team fell in the semifinals in 2017.

Patrick Hallmark just completed his first season as the head coach at the University of the Incarnate Word. He spent 11 years as an assistant at Rice on Wayne Graham’s staff until he departed in 2017 to become the pitching coach at the University of Missouri. Hallmark served in various roles at Rice before becoming pitching coach in 2013. He coached the pitching staff for four years and helped the staff set a school record for lowest ERA in 2014 (2.56). Prior to his coaching career, he played at Rice in the 1990s and played professionally for nine seasons, reaching as high as the AAA level in the minor leagues.