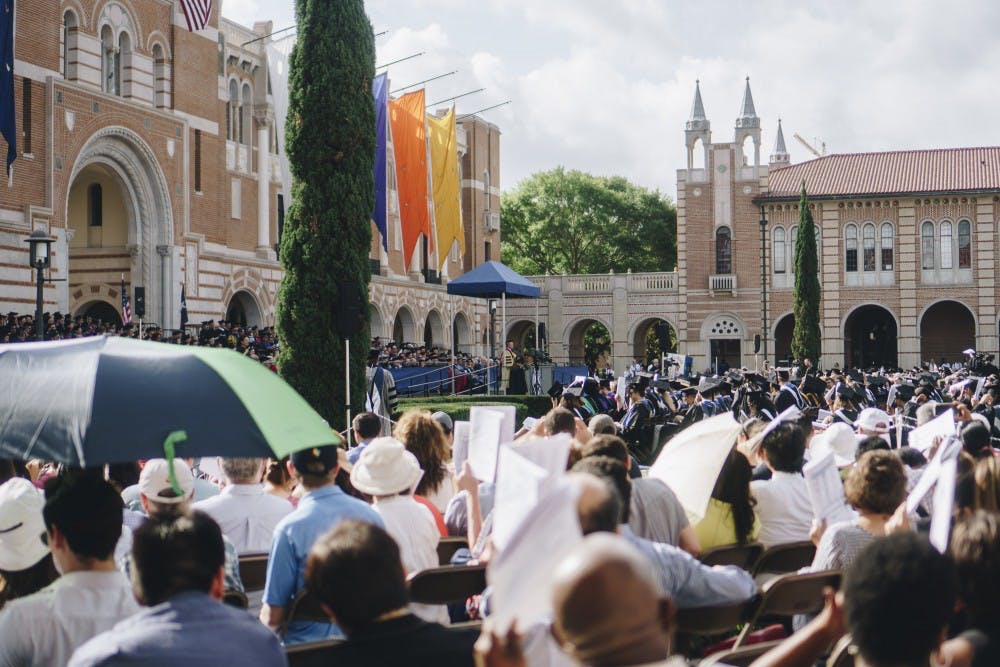 Four years ago, the class of 2018 walked through the Sallyport into the Academic Quad for the first time, hailed by fireworks and cheered on by upperclassmen. Last weekend, they sat in the same quad in caps and gowns as their friends and families looked on expectantly. The cheering classes of upperclassmen who had led them through Orientation Week had graduated, and now, it was their turn to walk out of the Sallyport.

In their last moments as undergraduates, the graduating seniors were congratulated by businessman and former New York City Mayor Michael Bloomberg. In his commencement speech, he stressed the importance of honesty, invoking topics from climate change to the Cold War.

Bloomberg said the Honor Code that allows Rice students the freedom to be evaluated through take-home exams relies on honesty.

“So as you go out into the world, I urge you to do what honesty requires: Recognize that no one person, nor either party, has a monopoly on good ideas,” Bloomberg said. “Judge events based on what happened, not who did it. Hold yourself and our leaders to the highest standards of ethics and morality. Respect the knowledge of scientists. Follow the data, wherever it leads.”

Bloomberg said it is the lack of honesty on a national-level that inhibits democracy.

“If we aren't honest with one another, we don't trust one another,” Bloomberg said. “Then we place limits on what we ourselves can do, and what we can do together as a country. It's a formula for gridlock and national decline.”

Bloomberg said the driving force behind increasing dishonesty is “extreme partisanship,” and the trend of powerful officials “propagating alternative realities” is a serious danger to democracy.

“There is now more tolerance for dishonesty in politics than I have seen in my lifetime,” Bloomberg said. “And I've been alive for one-third of the time the United States has existed.”

Bloomberg also pointed out that the Rice Honor Code doesn’t just ask students to be honest, but also to report dishonest behavior by other students.

To remind students of the oath they sign on every test and essay, Bloomberg said he is donating a cherry tree to be planted on campus, in homage to the myth of George Washington telling his father the truth about who cut down the family cherry tree. When Rice alum see it, he said, he hopes they will remember to hold themselves to the same principles to which they held themselves while at Rice.

“If 99 percent of scientists whose research has been peer-reviewed reach the same general conclusion about a theory, then we ought to accept it as the best available information — even if it's not 100 percent certain,” Bloomberg said. “Take climate change, for example.”

Bloomberg noted that some federal agencies had banned employees from using the phrase climate change.He warned graduates that “if censorship solved problems, today we’d all be part of the old USSR and the Soviets would have us speaking Russian.”

Bloomberg urged students to continue to be honest after leaving Rice, holding themselves to high standards of ethics and morality and engaging in discourse without censorship. Bloomberg praised Sen. John McCain (R-Ariz.), whom he had just visited, for his commitment to truth and willingness to cross party lines.

“He bucked party leaders, when his conscience demanded it,” Bloomberg said. “He defended the honor of his opponents, even when it cost him votes. And he owned up to his mistakes — just like that young kid with the cherry tree.”

Bloomberg concluded his speech by invoking the final words of the Declaration of Independence: “We mutually pledge to each other, our Lives, our Fortunes, and our sacred Honor."

“That pledge of honor — and that commitment to truth — is why we are here today,” Bloomberg said. “And in order to preserve those truths, and the rights they guarantee us, every generation must take that same pledge. Now it's your turn.”