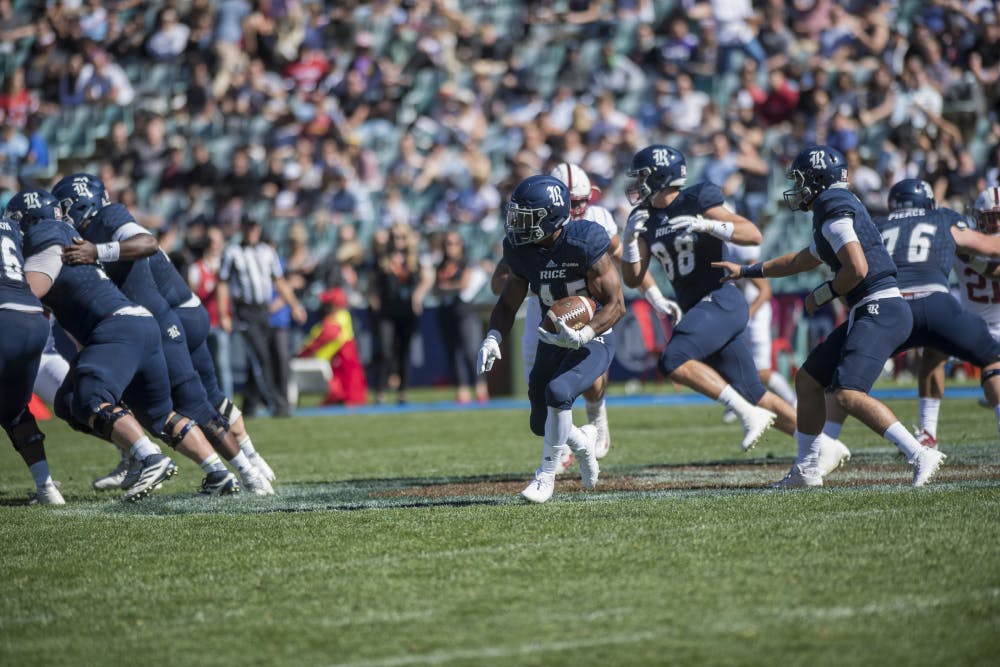 Sam Stewart is graduating next month. After four years of balancing a double major in economics and managerial studies with his role as a running back for the Rice football team, he is going to walk across the stage in front of Lovett Hall and receive his degree.

Stewart spent his years at Rice as one of the Owls’ top offensive players. He led the team in rushing in 2016 and was the team’s starting running back in 2017 despite dealing with injuries throughout the year. One of his favorite memories, he said, was making it onto SportsCenter’s Top 10 plays for a kickoff return against the University of Texas, Austin when he camouflaged his white uniform against the white paint spelling out “Texas” in the Longhorns’ endzone.

Graduating in 2018, however, was not Stewart’s plan. He was planning to stay another year and finish out his eligibility for the football team while taking his time to complete his studies. But one play during Rice’s season finale against the University of North Texas changed everything.

“I remember right before the hit, I remember getting the handoff and I remember seeing the linebacker,” Stewart said. “I had ducked my head, a normal football move like I always do, I lowered my shoulder and as soon as impact hit that’s when I lost all memory. I woke up in the ambulance.”

The play occurred with 7:46 remaining in the second quarter. It was Stewart’s first carry of the day. He ran up the middle for one yard before he collided with a North Texas defender, and he did not get up. The hit left a hush over the Rice Stadium crowd. Stewart laid on the ground unconscious for almost 20 minutes before he was carried off on a stretcher and driven away in an ambulance.

“You always see [major injuries] but you never think it’s going to happen to you or even somebody you know,” Stewart said. “They had me strapped down to a [back]board and kept telling me not to move. They were asking me if I could feel this, feel that.”

Fortunately for Stewart, he had movement in all of his extremities. He spent the night in the hospital for precautionary reasons but was released the next day with nothing but a concussion. The worst news, Stewart said, came during a seemingly routine appointment with a spine specialist a few weeks later.

“I was just thinking I’m about to get cleared to play,” Stewart said. “[The doctor] had the images of the tests he had done pulled up, my images and a normal person’s image. He showed me the discrepancies … In two areas, in my neck and my lower back, the spinal cord was supposed to be 16 millimeters in diameter and mine was only 10 or 11. I didn’t have those shock absorbers to take impact.”

As a result of his spine, Stewart can no longer play football. He said he was heartbroken when the doctors told him he had to quit the sport he loved.

“I was in shock,” Stewart said. “He told me and it didn’t hit me at first. I just sat there like ‘OK, what does this even mean?’ Then he verbally said ‘You can’t play anymore.’ I just broke down, started crying.”

Nearly five months later, Stewart is finishing his coursework to graduate in May and is completely healthy.

While he can’t practice, he is helping the football team by filming spring practices and meeting with recruits. Outside of football, he said he is currently in the process of searching for a job in finance.

“I don’t want to jinx it yet, but I’m pretty confident something is about to come up for me,” Stewart said with a smile. “I have a couple options.”

Stewart said although he battled through injuries, team struggles and difficult schoolwork during his four years, he is grateful he made the decision to come to Rice.

“There were definitely times when I reconsidered why I came here because school is hard,” Stewart said. “Classes get hard, football gets tough, we weren’t winning. It was tough, a big accumulation of a lot of things really made me second guess if I [chose the right school]. Looking back at it, it’s a reward once you get through it. Times get tough anywhere you go, but once I actually saw the bigger picture and allowed myself to step back, that’s when I realized I made the right decision.”

He said he considers himself fortunate to be living a normal life.

“Luckily everything worked out,” Stewart said. “I’m not paralyzed, I’m not in a wheelchair. Things could have been a lot worse; I’m definitely thankful.”