Number of students kicked off campus varies by college 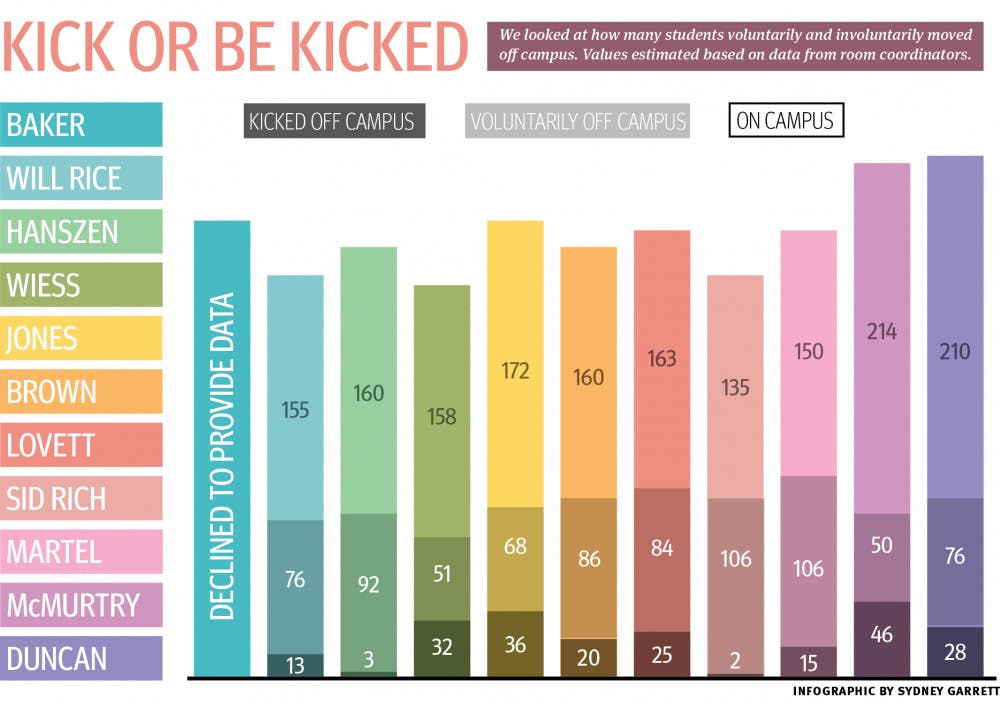 Note: in the above infographic, the numbers refer to current members of the college except for graduating students who will not be at Rice next year. The incoming class of new students is not included. [7 p.m. April 9]

The numbers don’t lie: No one wants to live at Hanszen College.

Percentages of students moving off voluntarily or trying to stay on next year reveal disparities between residential colleges. With an especially large current freshman class, some colleges are kicking off more upperclassmen to make room, according to rooming coordinators at Brown, Duncan, McMurtry and Will Rice Colleges, while others hardly need to kick off anyone at all.

“It seems like more people were kicked this year, likely because our current freshmen are all guaranteed beds, and since their class is a little larger, we had to bump more,” Brown Internal Vice President Kathryn Pickrell said.

On a college-by-college basis, McMurtry College had the largest percentage of students who wanted to live on-campus but were unable to secure spots at 15 percent, followed closely by Jones College at 13 percent.

According to McMurtry Housing Jack Coordinator Sofia Russo, demand for on-campus housing at McMurtry has increased due not only to close proximity to college events, but also to changing increasing rents near campus. Average Houston rent has increased 16 percent in the last five years, according to data from RentJungle, compared to a 7 percent increase in campus room and board over the same period.

Hanszen Chief Justice Frank Frankovsky III, who runs the college’s room draw, said that he believes Hanszen’s high number of students willingly living off campus is due to a general dissatisfaction with Hanszen’s facilities with respect to their pricing. This year, Hanszen kicked off only three students, according to Frankovsky.

“I understand up-charging to make a profit,” Frankovsky, a Hanszen sophomore, said, “but expecting students to live with amenities that are staggeringly inferior to other colleges while paying the same amount and be content about their situation is just absurd.”

According to Frankovsky, most of Hanszen’s off-campus students are seniors, a number that has more than doubled over the last five years.

“Our seniors are supposed to be our leaders, be the ones who set examples for others to follow suit to,” Frankovsky said. “With this trend, the college will be missing a crucial part of our culture, and our underclassman will only be hindered by it. I implore the university to at least tell us when our needs will be addressed, instead of pretending year after year like they aren’t capitalizing off of a far depreciated asset at our entire culture’s expense.”

Last semester, previous External Vice President Nik Liebster said he started a movement to encourage Hanszenites to suggest improvements for their facilities to the Vision for the Second Century, Second Decade campaign.

“I thought the V2C2 campaign was the perfect platform for getting the administration’s attention, because it stresses the importance of a ‘transformative undergraduate experience,’” Liebster said.

“Without addressing housing inequality, the administration is willingly letting engagement at colleges suffer as more and more upperclassmen move off campus, looking for housing that is not wildly overpriced and out-dated.”

Shubhangi Madhani, one of Jones’ two room jack coordinators, said she believes that Jones’ high number of students who tried to stay on-campus — 208 students competed for 172 available beds this year — is consistent with past years.

Robert Williamson, one of last year’s room jack coordinators at Jones, said many students want to live on campus at Jones due to its architecture and culture.

“I think the architecture in part makes people want to live on campus, both because we have good rooms, but also the tangible floor culture,” Williamson, a Jones College junior, said. “It’s both distinct but open to change with new students, which gives Jones floor culture a dynamic feel.”

In order of students choosing to live off-campus, Sid Richardson College came first with 44 percent, followed by Martel College with 39 percent, Hanszen with 36 percent, and Brown with 32 percent.

According to Will Rice bylaws, students who voluntarily move off campus as opposed to entering the on-campus eligibility lottery receive higher priority in room jack the next year. This year, only five beds were available for juniors at Will Rice, and 76 students moved off voluntarily.

Martel Vice President Eric Shi said these percentages vary year to year, but that generally very few Martelians are forced to live off-campus since so many do so voluntarily.

“Last year we were able to give everyone who wanted to live on-campus a spot, and the year before there were about five people left on the waitlist for the fall but everyone was accommodated in the spring,” Shi said.

According to Shi, Martel’s close proximity to off-campus housing leads to a greater number of students moving out.

“For example, Bolsover [a nearby street] has many houses that Martelians live in, and the college is also within walking distance so it’s convenient too,” Shi said. “And then since the houses go quickly, people probably just preemptively decide to move off-campus rather than wait to find out and scramble to find off-campus housing.”

The original version of this article stated that Martel College had the highest proportion of students choosing to live off-campus. Newer information, which is reflected in the article's infographic, indicates that by our estimate Sid Richardson College actually has the highest proportion at 44 percent. The article has been updated to correct the error. [1 p.m. April 9]