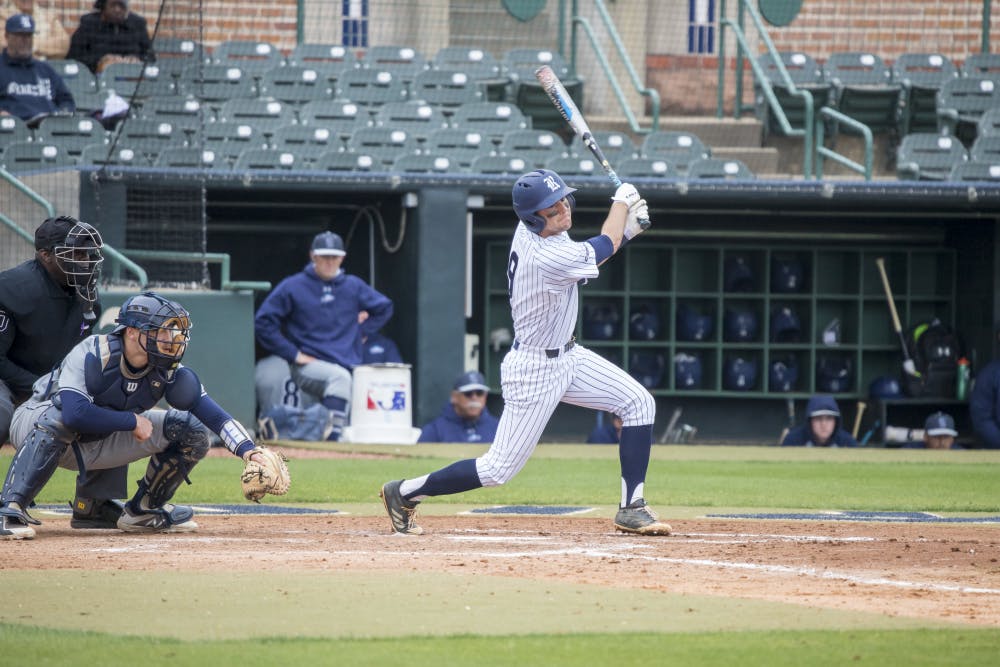 Rice’s 18-1 win on Sunday clinched a weekend sweep against Old Dominion University, as the Owls reversed their fortunes after being swept by Old Dominion in last year’s meeting. In the first game of the series, Rice recorded 18 hits for the second game in a row, following its 18 hits in a 14-9 loss to Sam Houston State University on April 3. But this time, the Owls’ pitching and defense held strong, resulting in a 9-0 win.

Sophomore pitcher Matt Canterino struck out the side in the top of the second inning, setting the tone for the rest of the game. He went on to record eight more strikeouts in the contest, marking his fourth double-digit strikeout outing of the year.

“I felt like he could have pitched a great outing with only his fastball,” Collins said. “Some of the hitters’ reactions after swings [were] comical.”

Friday’s game against ODU also marked the return of junior catcher Dominic DiCaprio, who filled in as the designated hitter. DiCaprio finished his first game back since Feb. 20 with three hits and two runs batted in, which came on a two-run home run. Following another multi-hit game on Saturday, DiCaprio said it was nice to finally get back in action.

“It just feels good to be playing baseball,” DiCaprio said. “I missed it a lot. I tried to be as much part of the team as I could, but when you’re not playing you can’t really do much for the team.”

According to head coach Wayne Graham, DiCaprio’s return is a major boost to Rice’s offense.

“You can’t take a bat like that out of your lineup and expect to be as good,” Graham said. “His bat in the lineup makes a tremendous difference.”

Saturday’s game against ODU was a more competitive matchup than Friday’s game, as the Owls eked out a 4-3 victory. Sophomore pitcher Roel Garcia started for the Owls and gave up only two runs in seven innings, racking up seven strikeouts against only one walk. Graham said he was impressed by Garcia’s poise throughout the contest.

“He did a great job,” Graham said. “He caught no breaks when [the defense] made bad plays at the wrong time, but he was unflappable; he was stoic.”

Sunday’s game against the Monarchs saw the Owls’ record season highs in hits and runs scored, as every player in the starting lineup joined in the hit parade. Junior shortstop Ford Proctor and sophomore third baseman Braden Comeaux led the charge, both finishing with three hits in the game. The game ended after seven innings on a mercy rule, finishing the Owls’ 18-1 victory.

Sophomore pitcher Addison Moss allowed only one run in the game through his six innings of work to earn his first win of the year, and sophomore pitcher Nick Silber closed the game out with a scoreless inning. Saturday’s starter Roel Garcia said he believes the Owls’ pitching staff is starting to hit its stride.

“Our starting rotation is all sophomores, so we’ve been playing together for over a year now,” Garcia said. “We’re definitely getting the rotation going and filling our spots up. Our team chemistry is definitely coming together.”

The Owls now have a record of 15-19 on the season and 5-7 in conference play and still have about another month left in the regular season. Graham said he feels like Rice has a chance to turn its season around in the coming weeks.

“All these people that wanted to jump off the bandwagon amidst the [struggles]; you can’t have eight injuries and five of them to impact players; that’s pretty bad,” Graham said. “Right now, if you look at the ballclub, it’s a good ballclub. We’re not as far behind the eight ball as we were for the conference tournament, but we gotta win.”

The Owls go on the road this weekend to take on Middle Tennessee State University for a three-game conference series. They are currently in a four-way tie for seventh in the C-USA standings. The top eight teams in the conference qualify for the conference tournament.