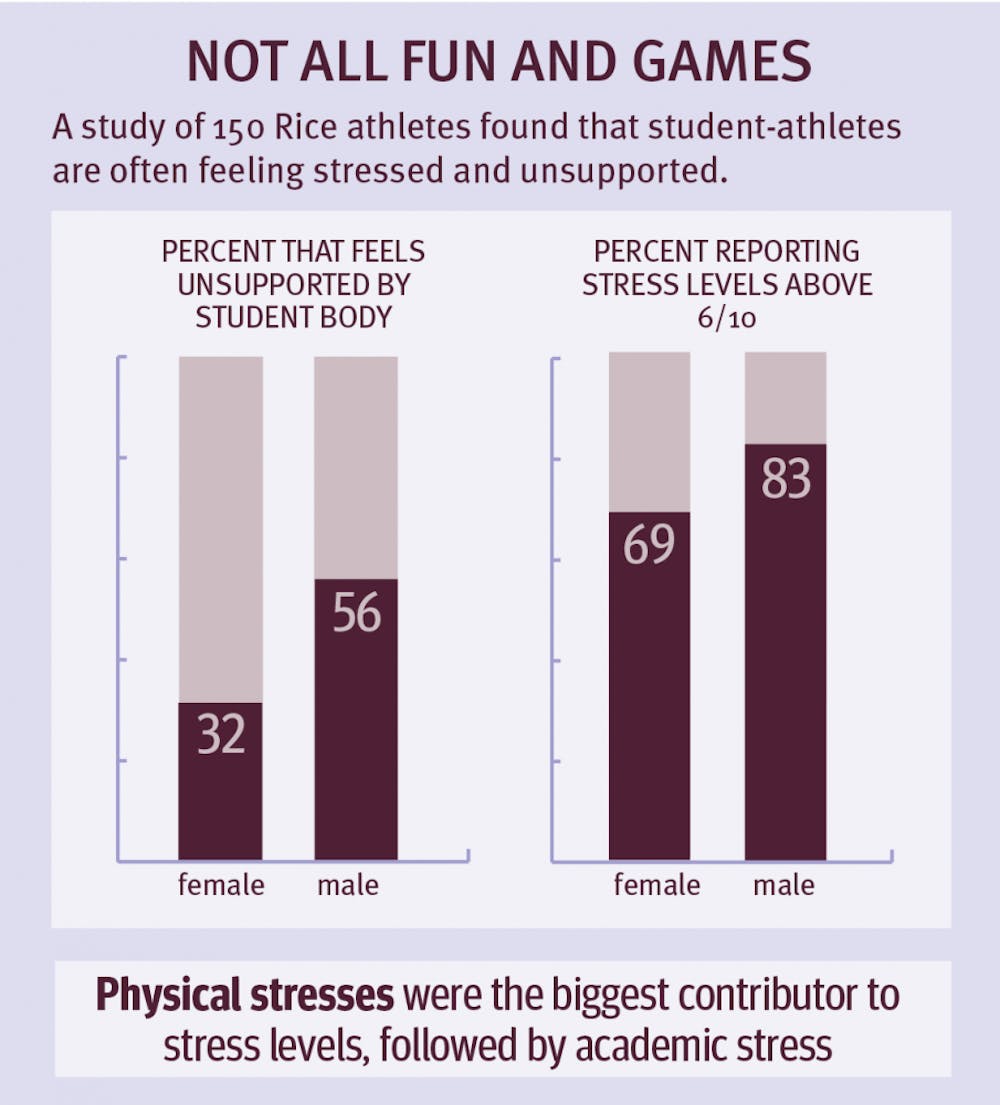 According to Litver, the group identified student-athlete mental health as a pressing issue from both experience and outside research and wanted to approach the issue in a scientific manner.

“We noticed that in a lot of the literature, there was concern for student-athletes because they have such different demands placed on them,” Litver said. “Their mental health needs might be different than regular students. We wanted to tap into that to see if there was a problem with that at Rice.”

Litver, Otoo and Tilbrook conducted the study as an independent sociology research project. All three are student-athletes: Litver is a swimmer, while Otoo and Tilbrook are on the men’s and women’s track teams, respectively.

Over half of males and nearly a third of females said they felt unsupported by the student body. Litver said Rice’s difficulties can create a dangerous environment for student-athletes.

The research team used their results to come up with a plan to combat the issues that came up in their study. One especially jarring statistic to Litver and Otoo was that while over 60 percent of student-athletes reported that they would go to teammates, friends and family for support, only about 12 percent said they would go to therapists or counselors.

57 percent of female athletes and 46 percent of male athletes said they would not go to Rice’s Wellbeing Center; some expressed concern about being asked to leave Rice due to mental health issues.

For this reason, the research team said they are planning to establish a system of Peer Wellbeing Athletic Advisors, analogous to Rice Health Advisors in the residential colleges. These PWAAs will be trained to talk to teammates about any mental health or wellbeing issues. The team has the approval of the athletic department to begin implementing the program in the fall. Otoo said he is hoping to have a group of PWAAs representing the entire athletic department.

“We might try to expand the program in the future, but as of right now, our goal is for at least one per team,” Otoo said. “That’s something that’s pretty achievable.”

All PWAAs will be juniors and seniors, and they will go through both an application and interview process. Otoo said he is hoping to select people who will embrace the chance to be role models for younger athletes.

“Our primary plan is to reach out to people we know from personal experience would be good at this sort of thing, people who would be interested and really passionate about it,” he said.

Once selected, they will be trained by the Rice Wellbeing and Counseling Center, according to Otoo. The PWAAs will report to two or three Head PWAAs, who will host meetings with them every couple of weeks.

A representative from the Rice Wellbeing and Counseling Center will oversee the Head PWAAs. Litver said while it would be ideal to have a counselor specifically trained to help student-athletes, the PWAA system is the next best option.

“We’re not asking student-athletes to be counselors for their teammates,” Litver said. “It’s more bridging the gap between athletes and the resources the university has for them.”

Litver said she is happy the research team and the athletic department have taken a proactive approach to student-athlete mental health instead of waiting until it is too late.

“It’s happened before, a suicide of a student-athlete,” she said. “We’re trying to not get to that point. We want to have precautionary measures to have every safeguard, every resource available to students so we never get to that point.”