​“A Quiet Place” innovates the horror genre with sound and silence 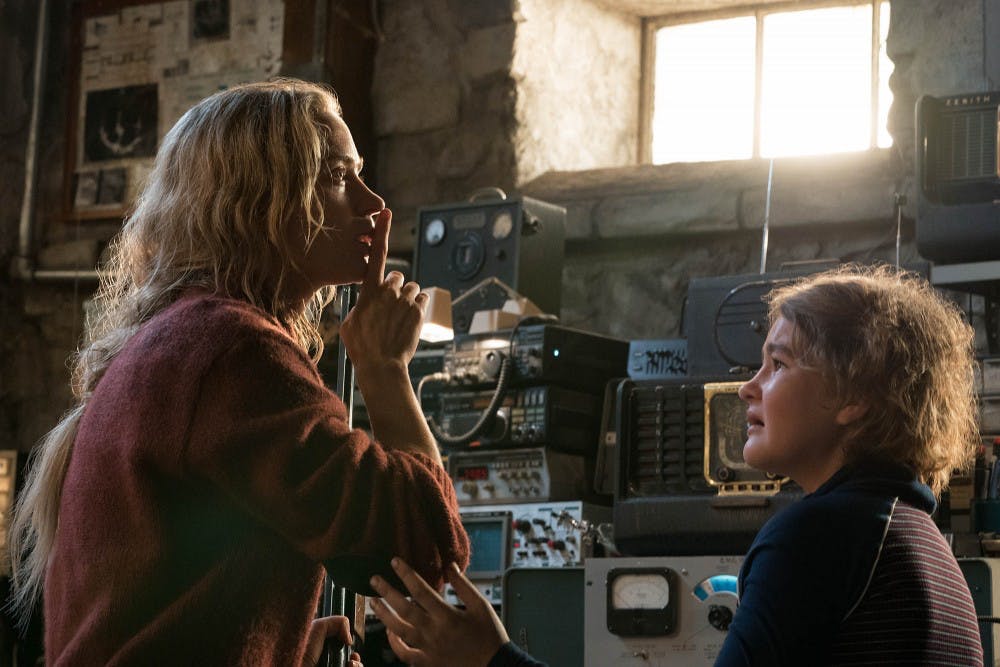 From Oscar winner “Get Out” to hard-R remake “It,” the horror movies of 2017 collectively grossed over $1 billion worldwide. One year later, this new golden age of horror cinema continues with John Krasinski’s “A Quiet Place.” A post-apocalyptic family drama starring Krasinski and his wife, actress Emily Blunt, “A Quiet Place” uses silence to craft a tense tale of the sacrificial and protective instincts that come with parenthood.

For over a year, the Abbott family has lived in complete silence on their farm. If they make any noise, be it in speech or action, then the blind extraterrestrial creatures with hypersensitive hearing capabilities that now roam the area will hunt them down. The family of four — parents Lee and Evelyn and children Regan and Marcus — knows all too well what happens when noise gets made, having witnessed the grisly demise of their youngest, Beau, in the apocalypse’s early days.

As Lee teaches his timid son Marcus the tools he will need to survive in this perilous new world, his daughter Regan, who is deaf, feels stifled by Lee’s insistence that she stay on the farm to help her pregnant mother Evelyn. Meanwhile, that impending due date threatens to reveal the family’s existence to the creatures.

As the story unfolds, it is clear that, for Krasinski and Blunt, who have children of their own, “A Quiet Place” is incredibly personal. Their experiences show in Lee’s and Evelyn’s tender interactions as a couple and with their children. Whether Lee and Evelyn are slow dancing to a song playing through iPod earbuds or hugging their children tightly after a close call, only their body language can effectively share how much they love their kids.

The talented cast makes Krasinski’s vision come alive through strong, expressive acting. Millicent Simmonds, in only her second motion picture role, is a walking master class as Regan. A confident young woman who takes pride in her identity as someone who is deaf, Simmonds makes Regan spunky and assertive — all in American Sign Language. When she’s not packing a punch with her signing and gestures, Simmonds subtly uses her facial expressions to highlight Regan’s feelings of entrapment without ever veering into showy territory to drive the point home. When Regan’s new cochlear implant fails to work, it takes only a few tears and fingers clenched at her lip for her pain to become palpable. As Marcus, Noah Jupe primarily uses his animated eyes to emphasize the young boy’s sensitivity to the terrifying world around him. When Marcus’ eyes widen at Lee’s suggestion that he accompany him fishing, the viewer is on the same page as Marcus from the get-go.

In the film’s opening minutes, the sounds of a battery-operated toy leads to a 4-year-old getting murdered in front of his family. This initial scene establishes and adds to the survivalist nature of the world of “A Quiet Place” and adds to the nerve-shredding potency of each of the remaining 95 minutes. From the very start, the viewer anxiously awaits the inevitable moment when the family makes a mistake. When Regan perfectly catches a toy that has fallen off a shelf, the audience breathes a sigh of relief. When it is revealed that one of the basement steps has a protruding nail, dread lurks, as the question of which unlucky family member will be the one to step on the nail emerges. Later, when a lantern accidentally shatters, everyone on screen and in the theater is put on the edge of their seat, because everyone knows that the creatures will eventually make their presence known.

“A Quiet Place” proves that the horror genre will never die, as horror films will always find the most inventive ways to bring a frightening dimension to everyday life. “Jaws” continues to deter swimmers from the ocean. “The Ring” made people afraid of their phones. Similarly, “A Quiet Place” makes silence scary by turning it into an essential for survival in a previously noisy world. You’ll be too frightened to even think about eating popcorn or unwrapping a candy bar while watching this movie.

A Quiet Place is showing in theaters now.