​‘Thoroughbreds’ follows in the footsteps of twisted cult classic 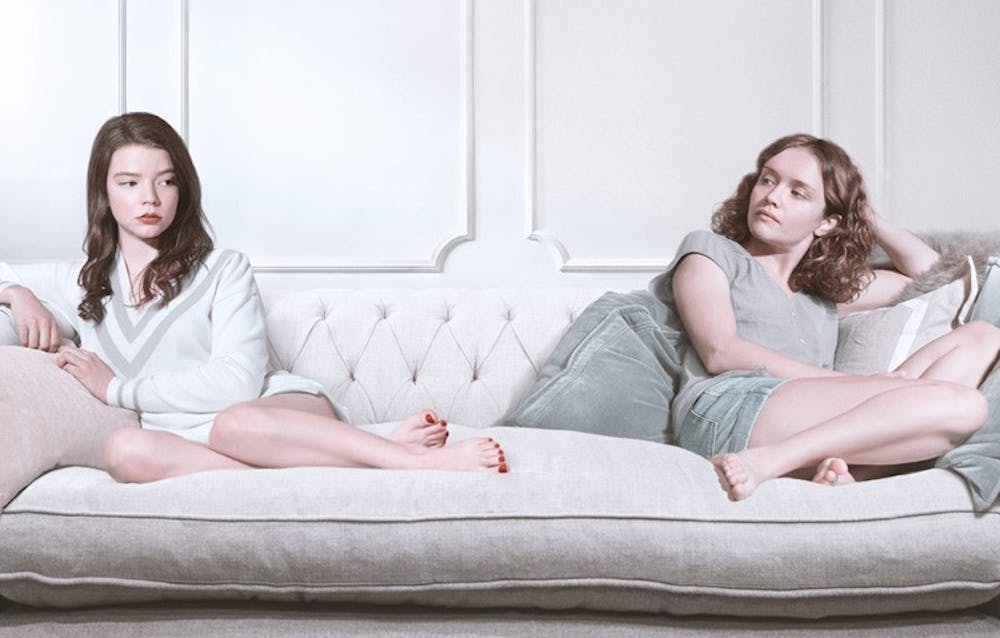 In its marketing campaign, “Thoroughbreds,” playwright Cory Finley’s big-screen directorial debut, has been pitched as “‘Heathers’ meets ‘American Psycho.’” Both films, which feature emotionally detached characters and macabre satirical humor, became cult classics in spite of low box office returns. Finley’s screenplay, which began as a stage play, shares these elements but carves out its own path as it uses a backdrop of high society and restless adolescence to ask if emotional attachment has value in a cold, calculating world.

Lily is a wealthy Connecticut teenager who can’t stand her obnoxious, exercise-obsessive stepdad, Mark. Amanda is Lily’s former childhood friend who’s become the talk of the town due to a recent act of animal cruelty. Brought back into Lily’s life under the guise of SAT prep, Amanda, a sociopath with a disturbing knack for faking emotions and reading people, catches on to Lily’s unspoken hatred of Mark. “You ever think about just killing him?” she asks. And, though Lily initially views such a thought as reprehensible, the more Mark walks all over her, the more she warms up to the idea. Enlisting the services of Tim, a local drug dealer, Amanda’s numbness and Lily’s charged personality start to clash and rub off on each other, leading to an outcome neither one sees coming until it’s too late.

Amanda, in the hands of Olivia Cooke, is a cross between a Wes Anderson creation and Patrick Bateman from “American Psycho.” With a deadpan tone that never wavers, the nihilistic Amanda is perfectly okay with going through life not feeling anything. Anya Taylor-Joy makes Lily’s internal struggles more volcanic by keeping them from erupting. Even in the moments when Lily sheds tears out of regret or fear, it seems like she’s holding back out of instinctive self-preservation. Paul Sparks, to skin-crawling degree, depicts Mark as the contemptible snake Lily makes him out to be until a moment in the film’s second act makes the viewer question if he is as much of a monster as we’ve been led to believe. In his final role, one he wrapped filming on two weeks before his death at 27, Anton Yelchin makes Tim, a character whose status as a drug-pushing sex offender should make him an immediate villain, charismatic enough for the viewer to care about his well being, even when on the receiving end of violence.

While the screenplay takes cues from other iconic dark satires, some of the behind-the-camera teams take cues from classic horror films. Lyle Vincent’s cinematography, in the style of “The Shining,” steers the viewer through Lily’s enormous million-dollar mansion in long, unbroken takes that are dizzyingly engrossing in their presentation of Lily’s upper crust yet unfulfilling life. The sound design department uses scrapes, scratches and baritone-pitched drums to keep the viewer leaning forward with curiosity but on edge from concern for what lies around the corner in each scene. The sudden removal or inclusion of fist-clenching sounds, from an annoying rowing machine to crunching broken bones, at certain moments makes for quite the stomach drop.

The most iconic scene of this future cult classic is sure to be the part where Amanda teaches Lily how to fake cry using what she calls “the technique.” “Can you teach me?” Lily begs. While the moment is played for laughs, it becomes less funny and more troubling as the film progresses. A weird but increasingly gripping ride, “Thoroughbreds” wonders if, in a world where everyone is indecisive about what they want, we’re all just playing a part in order to chase something better than what we already have.

Thoroughbreds is playing now in theaters.