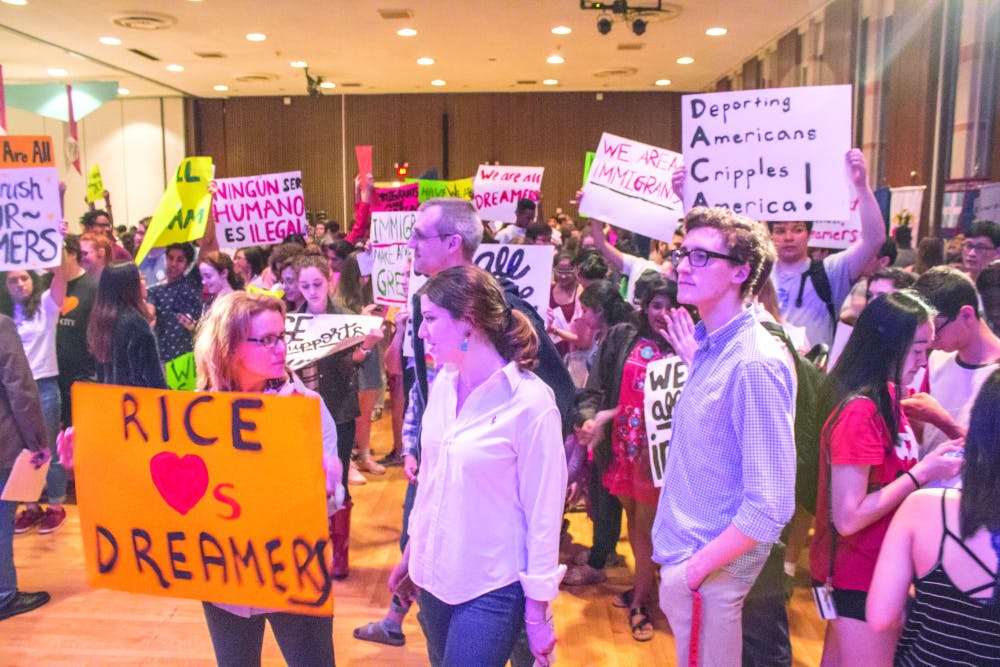 Students marched from each of the 11 residential colleges to the Rice Memorial Center on Monday night, joining other Rice community members in showing support for those affected by the federal Deferred Action for Childhood Arrivals program.

Monday marked the expiration date for new DACA applications, which was set by President Donald Trump in September. Judges in several federal courts have temporarily delayed DACA’s phasing out, ruling that the administration must continue to accept DACA renewals.

Both undergraduate and graduate students read stories, poems, statements and more in front of over 200 fellow students and faculty members. Kimberly Olea, incoming vice president of the Hispanic Association for Cultural Enrichment at Rice, spoke about her family’s path to citizenship in 2017, describing herself as “one of the lucky ones.”

“As a child, I lived in constant fear of deportation,” Olea, a McMurtry College sophomore said. “I cried at the idea of having to leave behind the only life I'd ever known. When I was 12, I waited in line for an interview at the Department of Homeland Security Office in San Antonio where I tried desperately to show the officials that I, a 12-year-old, was a good person who decided to live here because this was the place I call home.”

Several students gave musical performances as well, ranging from Wiess College senior Isabel White’s rendition of “The Impossible Dream” from the musical, “The Man of La Mancha”, to Austin “Kid Fig” Figueroa’s performance of “Desperado,” an original song he said was inspired by his experience with immigration-related struggles growing up in the Rio Grande Valley.

"Grandpa worked that nine to five when he was only six. He's basically the reason child labor laws exist," Figueroa rapped to the crowd.

Figueroa said he was uncharacteristically nervous before performing because the subject was so personal to him, but seeing the other speakers address their personal connections to immigration issues inspired him to do the same.

“I'm from the Rio Grande Valley, I grew up 10 minutes from the border so immigration was an issue that people in my family and my community faced on a daily basis,” Figueroa, a Brown College senior, said. “It's hard to talk about something that hits close to home. My sister was deported when I was eight years old. It's difficult growing up in a mixed status family when not all stories have happy endings.”

After Trump’s announcement of the DACA phase out in September, Rice President David Leebron issued a response to Trump’s announcement, saying that Rice would continue to extend financial aid and other benefits to DACA students and take whatever action permissible under law to avoid increasing the risk that such students are deported or otherwise have their immigration status challenged. Leebron said the statement continues to stand as Rice policy.

“We will continue to make available to DACA students the financial aid and other resources they need to attend Rice, as well as to advocate with our political representatives for a renewal of the DACA program,” Leebron said. “We will also continue to work through our representative organizations, such as the Association of American Universities, to strongly advocate for the rights of DACA and DACA-eligible students to remain in the country and pursue their education.”

Brown College President Santiago Avila said the idea to host the event came in early February, and planning has been coordinated between the residential colleges, the SA and GSA, HACER, Student Activities and other student organizations. According to former HACER President Alberto Maldonado, the event came together over the course of only 22 days.

Maldonado said it is a cultural shock for him to come to a campus where people are so open to different ideas given his small-town background.

“To see all these students here today from many different races, many different backgrounds, many different parts of the country and outside the country, from different colleges and groups, it’s really impressive to see that we as Rice students are able to come together for something that’s so important to many people here on campus and throughout the Houston area,” Maldonado, a Lovett College senior, said.

Brown freshman Franklin Briones said he has friends and family that are DACA recipients. Briones said it was good to see people unafraid to come to the event, although they may have been hesitant at first.

Leebron said he was pleased to see the widespread effort on campus to express both support and concern for DACA students and staff, as well as for students who have friends and relatives who are DACA qualified or eligible.

“We hope that our DACA students and staff, as well as other immigrant students and staff, will feel tangibly the very strong support they enjoy across the community, which is indeed in this sense representative of the overwhelming sentiment of the American people,” Leebron said.

Engles, who emphasized DACA as the most important issue in her campaign, ended the event by leading the members of the Rice community in a rendition of “Lean on Me.”

“We have elections tomorrow where you can take Rice's community values and your thoughts and share them with elected officials,” Engles, a Lovett sophomore, said. “It is so easy to only pay attention to what is going on inside the hedges, but take a look at what is going on outside as well.”