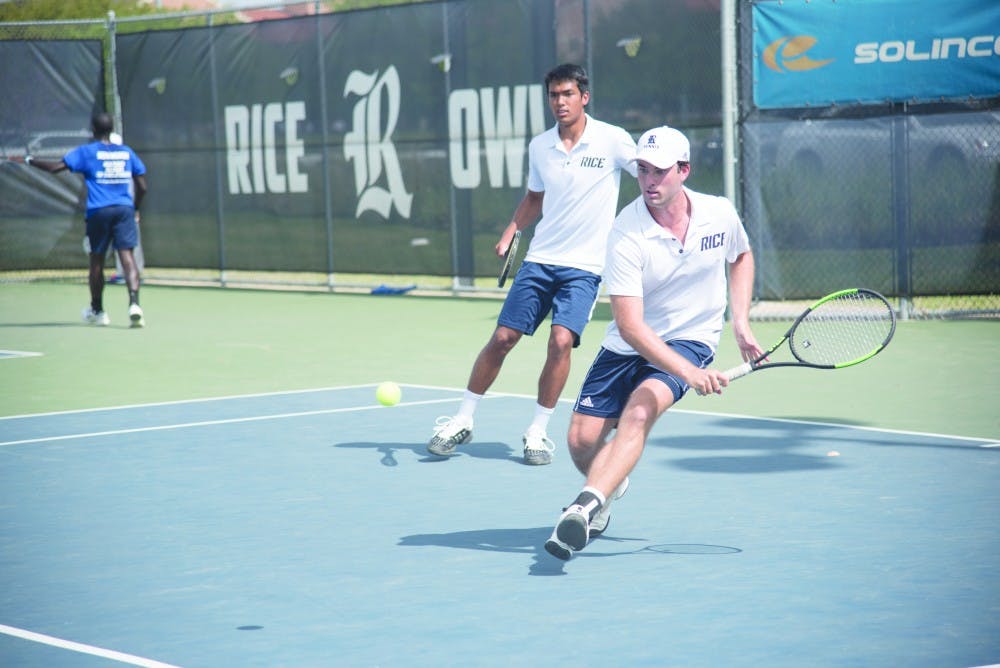 The Rice men’s tennis team entered the Texas Tamale Company Rice Invitational with a 6-11 record. At the conclusion of the tournament, the Owls’ record stands at 7-13 after a pair of losses on Saturday to Virginia Commonwealth University and Wichita State University and then a win against Texas A&M, Corpus Christi on Sunday.

After dropping their morning match to VCU, the Owls had to adjust their lineup for their afternoon match on Saturday against Wichita State University. Redshirt sophomore Eric Rutledge was taken out as a precaution after aggravating a prior injury. However, the Owls responded to the injury by ending the team’s six-match doubles losing streak. Head coach Efe Ustundag said he was impressed by Rice’s mental fortitude.

“I thought the entire team reacted really well to it,” Ustundag said. “It’s not easy when you have your leading scorer out.”

Due to Rutledge’s injury, the Owls had to put together three new doubles pairings. None of the pairs had played together before, but Ustundag said they fed off the crowd to come away with wins and claim the doubles point.

Despite the 1-0 lead, Rice could not complete the victory against Wichita State. The Shockers claimed four of the six singles matches to defeat the Owls 4-3. Freshman Mohamed Abdel-Aziz fell in three sets in the final match to end the Owls’ bid for a win.

After losing their Saturday morning match to Virginia Commonwealth University and losing their afternoon match to WSU, the Owls responded with a 4-1 victory against Texas A&M University, Corpus Christi on Sunday. Rice started strong in singles play, capturing five of the six opening sets. Rutledge said he attributed the team’s victory to the recovery process the night before.

“After the match was over, [coach Ustundag] really stressed the fact of taking care of our bodies,” Rutledge said.

Abdel-Aziz won his singles match in two sets. On the court next to him, Sarkar played in an unfinished match which ate up time due to many disputes between one of the players and the chair umpire over calls.

Sunday marked the end of the Owls’ 10-year Rice Invitational title winning streak. Despite not winning the tournament, Ustundag said he feels that the team can take a lot from the weekend.

“I felt like the team played better and better with each match so hopefully we can take this into conference play the next week,” Ustundag said.

The Owls will look to bring the momentum from Sunday’s victory against the Islanders on to the Conference USA shootout. The Owls will start out the C-USA shootout at 10 a.m. on March 30 in San Antonio.

On the women’s side, a pair of 6-1 victories against No. 50 College of William and Mary and No. 36 Princeton University brought the Owls’ winning streak to four and vaulted the Owls back into the national rankings.

As of March 20, Zhang and Hodge are the No. 26 female doubles team in the nation according to the Intercollegiate Tennis Association rankings. Hodge said she and Zhang are focused only on helping Rice, not on individual accolades.

“It’s about the team, so we want to play the best that we can so we can help our team and get the doubles point,” she said.

Freshman Anna Bowtell and sophomore Priya Niezgoda also won their singles matches in straight sets. Freshman Michaela Haet was the last Owl on the court, dropping a 10-4 tiebreaker to close the match. Head coach Elizabeth Schmidt said she was proud of the team’s fight.

“Every match is going to be a battle,” Schmidt said.

On Sunday, the Owls won five of their six singles matches, with two of the five victories coming in tiebreakers, against No. 36 Princeton. Rice also swept both doubles matches to earn the doubles point to complete a 6-1 win.

The Owls now sit at 10-6 on the season and are ranked No. 43 in the nation. Rice has one more home match against McNeese State University at 5 p.m. on April 3 before heading to Florida to face the University of Central Florida and the University of Southern Florida. The Owls’ final match before C-USA championships will be against Louisiana Tech University on April 14.