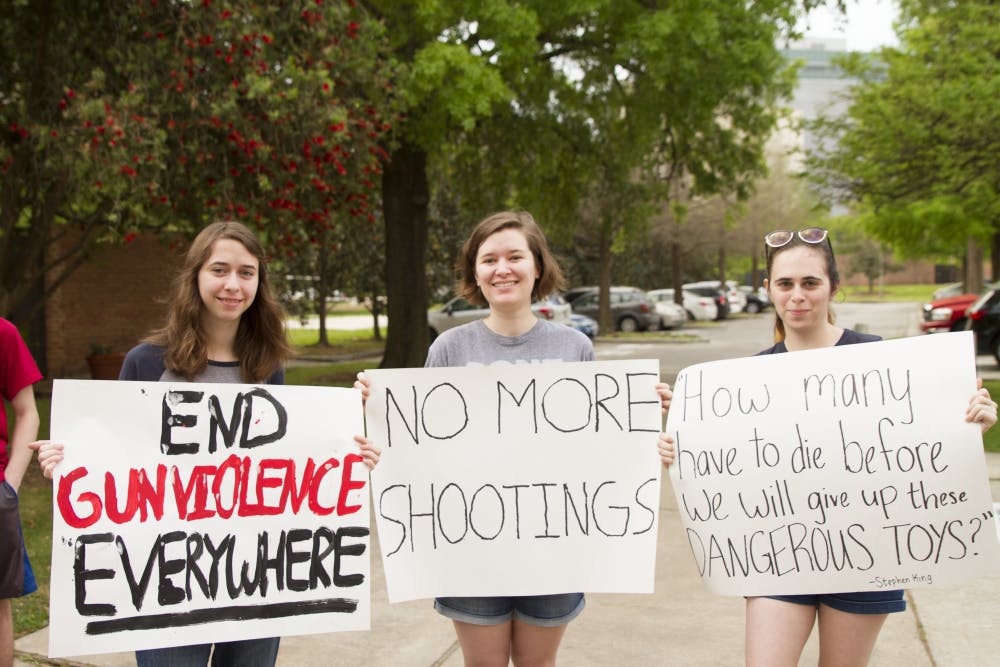 While most of Rice University took part in Beer Bike on Saturday, some students left campus to attend the March For Our Lives, a student-led demonstration taking place around the country in support of tighter gun control following the Marjory Stoneman Douglas High School shooting in Parkland, Florida.

The march was followed by Rice Call to Action Saturday evening in Farnsworth Pavilion, an event organized by Hannah Meeks, a graduate of Stoneman Douglas, for students who participated in Beer Bike but still wanted to take action against gun violence. According to Meeks, only a little over a dozen people attended the event.

“It was incredibly disappointing,” Meeks said. “I can understand that it was a little bit inconvenient, because it was the night after Beer Bike and people were tired. But the thing is that with movements like these, if everyone just waited for the time that was most convenient for them to give a shit, then nothing would ever happen.”

Meeks spearheaded the effort for Rice students to attend the March for Our Lives as a unified group as well as organizing Rice’s Call to Action.

“This happened at my high school so it's just something I had to do. It mattered a lot to me, it was very personal to me, and I really wanted to get people at Rice to care about what happened,” Meeks, a Hanszen College freshman, said.

Romanda Dobson, who is also a graduate of Stoneman Douglas, said the shooting made her realize the need for immediate change.

“I had two siblings at Douglas,” Dobson, a Wiess College freshman, said. “Luckily they weren't really close to where the shots were being fired so they were safe, but had they been any closer, they definitely would have been in the way of danger. One of my classmates, his sister got shot. That really made me feel like it definitely could have been me and I had two siblings. He only had one and he lost his one sibling.”

Meeks said she decided an effort had to be made to encourage Rice students to attend the march despite Beer Bike.

“We made a Facebook page,” Meeks said. “I tried to reach out to people from other colleges, see if they could help organize the event. And then it was just talking to people, making all these different reservations, and trying to get funding for certain things — for example, for supplies for the sign-making activity, which I got from Rice Student Volunteers Program.”

According to Meeks, between 20 to 30 Rice students attended the march, which was more than she had expected due to it falling on the same day as Beer Bike.

“Marches are helpful because when you see the total attendance, millions of people coming out to support this, it sends a very strong message that there is strong support for this movement and all these people are expecting something to be done,” Meeks said.

The turnout from the larger Houston community was high, according to Dobson.

“While we were taking the bus there people just kept coming on,” Dobson said. “The bus was really filling up and you could tell that all these people were going to the march. When people started going onto the street, I realized just how many people had actually come.”

Many speakers addressed the issue of tighter gun control during the march, including Houston Mayor Sylvester Turner and former Student Association President Justin Onwenu, whose term ended on Saturday.

According to Onwenu, the March For Our Lives was an important movement because everyone has been touched in some way or the other by gun violence.

“For me, growing up in cities, suburbs and rural parts of Michigan and Alabama, I really understand that the pain is similar for people no matter their background,” Onwenu said. “Seeing elementary school kids as well as college students and baby boomers all demanding change was really heartwarming and inspiring.”

Onwenu said he became a speaker in the march through reaching out to the main organizers of the event to learn more about how Rice could get involved. The Sid Richardson College senior said he wanted to bring about a sense of optimism to those marching.

Onwenu said he was satisfied with the turnout of Rice students to the march.

“On Beer Bike, the biggest event of the year, Rice students took time to come out and show their support for this nationwide movement, I couldn’t be prouder,” Onwenu said. “We’ll always be moving towards progress and this was a great demonstration of how far we’ve come as a campus.”


Meeks organized Rice Call to Action which was held in Farnsworth Pavilion on the day of the March For Our Lives as well as Beer Bike.

“The point of that was that even if you chose to go to Beer Bike instead of the march, you could still do something to show solidarity with the marchers and with what happened,” Meeks said. “Basically it was kind of giving people an out to have it both ways.”

“You could either talk to your senator here or the one back home, so for [myself and Meeks] the ones back home, but most people who came were from the Houston area in Texas,” Dobson said. “Mine went to Marco Rubio. So it was just that basically, us coming in, finding a template, typing it up and then sending it to our senators.”

Baker College freshman Sabrina Bisaga said she was encouraged to see the demand for gun control gain momentum among students.

“I felt it was important to participate as I often felt unsafe in my high school,” Bisaga said. “The number of lives that have been taken is absolutely ridiculous, and it’s scary that politicians won’t prioritize the lives of the next generation over the right to bear arms. At the event, we were taught how to write an effective letter to our representative and the best ways and times to contact them.”

Dobson said students should write letters to their representatives in addition to attending the march.

“It's all well and good to go outside and march and show people that you still care about stuff like this, but then you also need physical improvement,” Dobson said. “People are knowledgeable about gun control and how much we need to reform it, but we need to actually put it on paper, and legislators need to be passing bills. We need to be bringing it up so that we don't have things like this happening so often or at all for that matter.”

According to Dobson, who said she was not passionate about gun control before the shooting at her former high school, it is important for Rice students to become more politically aware and take action before they themselves are impacted by gun violence.

“Once [the shooting] happened so close to home and so close to people I love, I realized that someone really needs to change this,” Dobson said “[It’s important to make] people aware that, yeah, things are going on around you. Things are going to happen and it’s going to be too late. You need to start voting, voting people in [and] out. Voting for things that you want to see happen. Because it's not going to change if you just sit down and do nothing.”