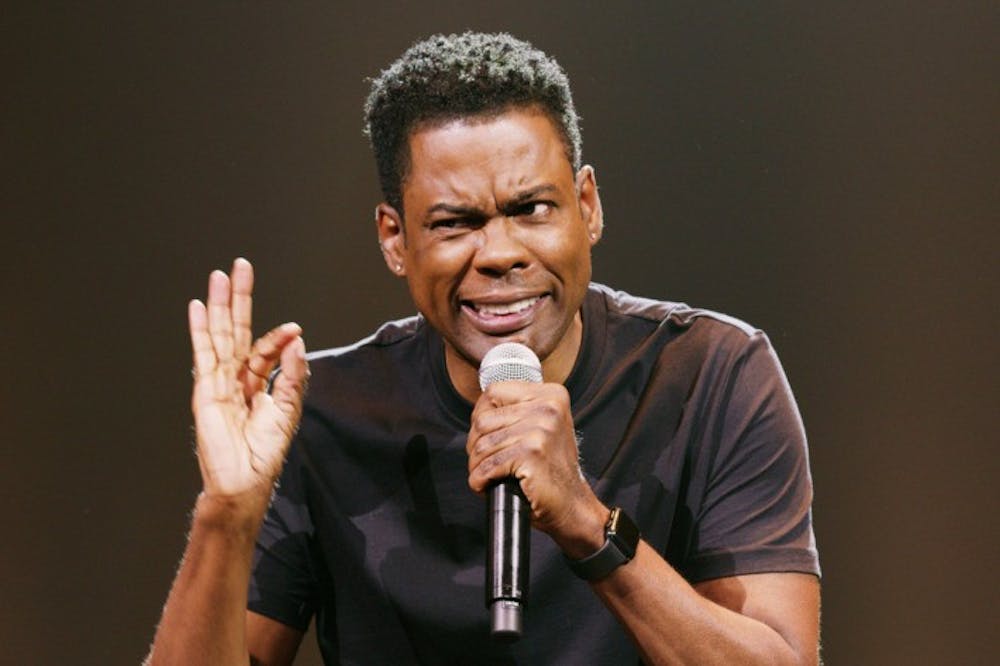 Chris Rock has been a huge name in comedy for decades now, and his latest standup special suggests he’s capable of staying relevant for years to come. The Netflix exclusive’s unconventionally spelled title alludes to a recurring joke in the show: Relationships are like bands — even if your role is as simple as playing the tambourine, stick to it and play passionately. While Rock admits his failure to be a good bandmate, which led to his divorce, he is as successful as ever as a comedian. In addition to relationships, Rock touches on race, parenting, gun legislation and religion. Effortless transitions make it possible to address this breadth of themes in a one-hour timeframe. It’s difficult to pinpoint exactly where one subject ends and the next begins because of how seamlessly they succeed one another. Moreover, Rock possesses an alchemic gift for transforming the seriousness of these topics into seriously funny content.

Throughout the special, I don’t think there was a single 10-minute stretch where I didn’t chuckle. Yet, if I were to attempt to retell most of Rock’s numerous, accessible jokes, I doubt it would receive any response. This is because most of the magic seems to lie in Rock’s unquantifiably excellent comedic timing. Every breath, pause and movement is essential. Rock’s extensive experience enables his delivery to come across as natural, even though the effectiveness of each word implies careful calculation behind its selection. When Rock speculates that Mark Zuckerberg was bullied in middle school and that helped lead to his success, I found myself snorting at “Zuck-zuck-zuckerfuck” — a punch line that, on paper, seems far more asinine than amusing.

Furthermore, in the same way that many works of fiction require one to suspend disbelief, truly enjoying “Tamborine” requires recognizing the hyperbolic nature of some of Rock’s more provocative anecdotes. Rock starts his set by drawing attention to issues surrounding racial inequality in the criminal justice system, joking about how he’d like to see as many white kids killed by police as black kids. A white mom might not immediately laugh at Rock requesting a world in which a white mother appears on TV pleading, “We need justice for Chad, he was just coming home from racquetball practice.” But any viewer, regardless of demographic, can find the humor in this by taking a step back and realizing this simply never happens. It’s funny because it’s absurd, but Rock wants you to recognize the absurdity.

Rock isn’t provocative for the sake of being provocative — he wants the audience to question what the ridiculousness of the role reversal means about society. For this reason, if you watch the special with the intention of being offended, it’s fairly easy to take many of the jokes out of context and label them distasteful. But why would you? Rock forces awareness of the tendency to scrutinize satire in that he criticizes the hypersensitivity that serves as the basis for it. His objection to this attitude is a key element of his take on parenting — he insists that children should be raised to understand that nobody cares if they can code if they cry when their boss doesn’t say “Hi.”

In addition, Rock’s newest show is notable in that a significant part is highly personal. There are moments when unfunny details of his life — the reality of his divorce and fighting for custody of his children — elicit dead silence from the audience before he begins to mold them into setups for jokes. These moments of silence are striking in their ability to demonstrate that even if something is inherently unfunny, humor can successfully be used to frame it.

Overall, once you let your guard down and allow yourself to laugh, “Tamborine” is a hilarious and timely production. Yet, even if you were to hate it for some reason, it’s likely that Chris Rock would respond with the same advice he supposedly gives his children daily, “Nobody thinks you’re cute, nobody thinks you’re smart, nobody gives a fuck about your opinion.”

Tamborine is currently streaming on Netflix. Watch the trailer below: