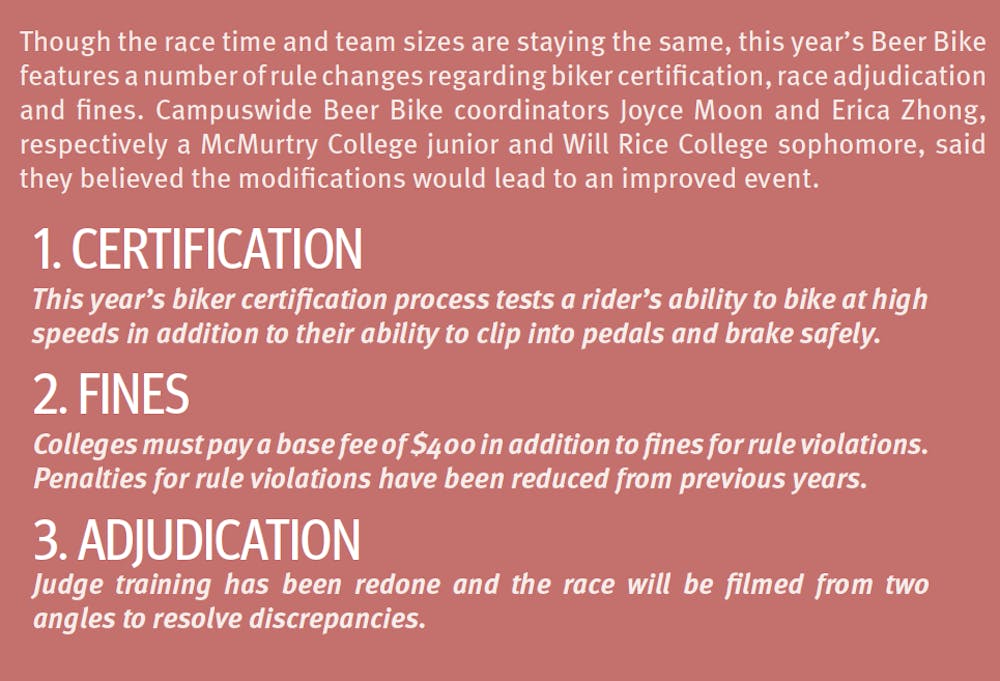 Though the race time and team sizes are staying the same, this year’s Beer Bike features a number of rule changes regarding biker certification, race adjudication and fines. Campuswide Beer Bikes coordinators Joyce Moon and Erica Zhong, respectively a McMurtry College junior and Will Rice College sophomore, said they believed the modifications would lead to an improved event.

To be certified to race this year, Moon and Zhong said riders must have passed two tests: a clipping task and a biking task. In the clipping task, bikers clipped in, rode a short distance, and clipped out three times. They could not fall, swerve or take too long in order to pass. In the biking task, riders completed two fast laps on the track in groups, first passing inside and then outside a set of cones. The bikers must have then properly braked and clipped out on their own in order to pass.

Previous years’ certification process tested clipping in, a line ride and a free ride, according to Moon and Zhong.

“From what we’ve been told, bikers were able to pass even if it was obviously their first time on the track,” they said. “This year, we completely scratched the old certification process, and asked members of [the Rice University Cycling and Triathlon Club] for assistance in creating a new certification process.”

Another change this year is that before each race, two random bikers from each team will have to undergo a breathalyzer alcohol test, according to Moon and Zhong. Blood alcohol content above 0.02 will disqualify the biker and result in testing the entire team, Moon and Zhong said, and having more than two members above that level will result in the team’s disqualification.

Moon and Zhong said they met in early February with RUCT officers and Luke Howe-Kerr, who they said was a biker passionate about improving safety. The RUCT members then drafted the new certification process. Along with the track coordinator and experienced bikers, Moon and Zhong said they decided to implement the process this year with some minor changes.

Moon and Zhong decided not to implement additional changes to the rules that proposed moving the race time earlier and reducing the number of bikers per team following a mostly negative poll of residential college Beer Bike coordinators.

RUCT President Mary Natoli said she worked with three other officers, all of whom have competed in a number of off-campus cycling races, to develop the new certification process.

“We tried to develop a set of tasks that would demonstrate a rider's competency in handling a road bike at near-racing speed, while still ensuring that anyone, with a little practice, could pass the certifications,” Natoli, a bioengineering graduate student, said. “Beer Bike was never meant to be an elite cycling race, but the increasing number of crashes in recent years did seem to require that something be done.”

The certification tasks also had to be kept focused, Natoli said, because 240 bikers need to be certified.

“We hope that our recommendations will contribute to a safer Beer Bike, but ultimately it's up to each and every rider to race carefully and at a speed at which they can control their bike,” Natoli said.

Will Rice College women’s bike team captain Ellen McMullen said she thought the certification changes are a step in the right direction, though the majority of them might not directly make bikers safer.

“They checked if we could clip in and out of the bikes which is important for biking in general, but on race day you start clipped in and get caught so you don’t have to clip out independently,” McMullen said. “They also checked if we could stop from a sprint within the distance of the pit, but again with catchers that’s less relevant for race day, and not where crashes tend to occur.”

McMullen said the certifiers were checking for swerving during the sprint portion of the test, which she saw as encouraging, but that because the sprints were individual they do not fully mimic race conditions.

“Basically it was better because we actually had to sprint and be able to control a bike at high speeds, but it still needs to be more focused on group riding,” she said.

Moon and Zhong said they believed the changes would improve biker safety. They said it was difficult to foresee whether certification changes might continue in future years.

“We will get a better sense of what needs to be emphasized or verify that the certification process is good as possible once the races are completed,” they said. “Beer Bike is always changing and so are the processes around it.”

After complaints from residential colleges about high fine totals after last year’s Beer Bike, this year’s event will debut a new fine structure designed with the intent of helping colleges predict the amount they need to set aside for paying fines.

Each college will have to pay a base fee of $400 in addition to fines that are assessed by student security volunteers and judges during the day’s events. The individual fine violations have been decreased from last year, with most fines being decreased by over half their previous amount. According to Moon and Zhong, they considered input from last year’s college Beer Bike coordinators to create the new fines system, which raises funds for repairs to the Beer Bike track in Greenbriar Lot.

“With the new system, the amount of money paid by each college should be drastically decreased while still being able to save up money for track renovations,” Moon and Zhong said.

“We’d like to open a dialogue with the campuswide [coordinators] on this topic because we don’t think it had the proper amount of discussion before being implemented,” Stefani said in the email. “We believe the college budgets are given to support the individual activities and culture within each college, and that a campuswide improvement on a parking lot outside of our domain shouldn’t immediately fall on us.”

Wiess College Beer Bike Coordinator Drew Keefer said the new process is an improvement over last year’s but that the college beer bike coordinators were not involved in formulating this new system. Keefer said that while he understood the need to control dangerous behavior on beer bike, he believed the process was too punitive.

“Really harsh monetary fines, that honestly prey on ignorance for the most part, irk me,” Keefer said. “I can’t see how you think it’s reasonable that throwing one balloon of mayonnaise is worth a $1,500 fine.”

This year’s changes come after last year’s fine system resulted in fines that were higher than colleges had previously budgeted for. After complaints by colleges regarding the fines, 2017 campuswide Beer Bike Coordinators Ashton Duke and Colin Feng made the decision to only charge certain violations, such as throwing water balloons outside of Founder’s Court and throwing balloons before fight begins, one time rather than per occurrence. This decreased the cost of college’s fines drastically. For example, at Will Rice College, the sum of the assessed fines dropped from $5,250 to $2,050.

These funds supplement the amount that Beer Bike receives from blanket tax every year and are specifically used for track repairs, according to Moon and Zhong. Beer Bike applies for blanket tax funding separately from Rice Program Council and money is allocated by the Blanket Tax Committee specifically for Beer Bike usage. In last April’s blanket tax allocation process, Beer Bike requested $50,322 from the blanket tax pool, a 9 percent increase from the previous year. According to last year’s submitted blanket tax documents, $2,000 was specifically set aside to rollover for a track maintenance fund that are necessary every four to five years at a cost of $10,000 to $15,000.

“Beer Bike is under the unique situation that it has to make large one-time expenditures in the form of Track Repairs that are necessary for the functionality and safety of the event,” the Beer Bike blanket tax budget proposal states. “Part of our budget anticipates adding an additional $2,000 each year to this rollover to ensure there are always funds necessary for potential track repairs.

Moon and Zhong said the races will be filmed from two perspectives this year: the finish line and the football stadium. This comes after last year’s results included errors and possibly inaccurate times.

“Last year’s only issue revolved around the judges not following the instructions to properly record each lap,” Moon and Zhong said. “On the timing sheet, there’s places to circle each lap completed by each rider and the judges for four colleges did not circle those numbers which is why they recorded the cool-down lap. This year, we are implementing the video cameras to ensure that we can go back and look at the results, if necessary.”

This year’s judges coordinator, Priscilla Li, also redid training for judges, according to Moon and Zhong. They said the training emphasizes handwriting legibility and understanding of the cool-down lap, and includes track sessions to help the judges practice. Finally, they said judges will be provided with walkie talkies to communicate with each other and the campuswide and area coordinators.

Edit March 21 10:48 a.m.: The article has been corrected to state that a team is disqualified if more than two bikers have a BAC above .02, not just two bikers as the article previously said.