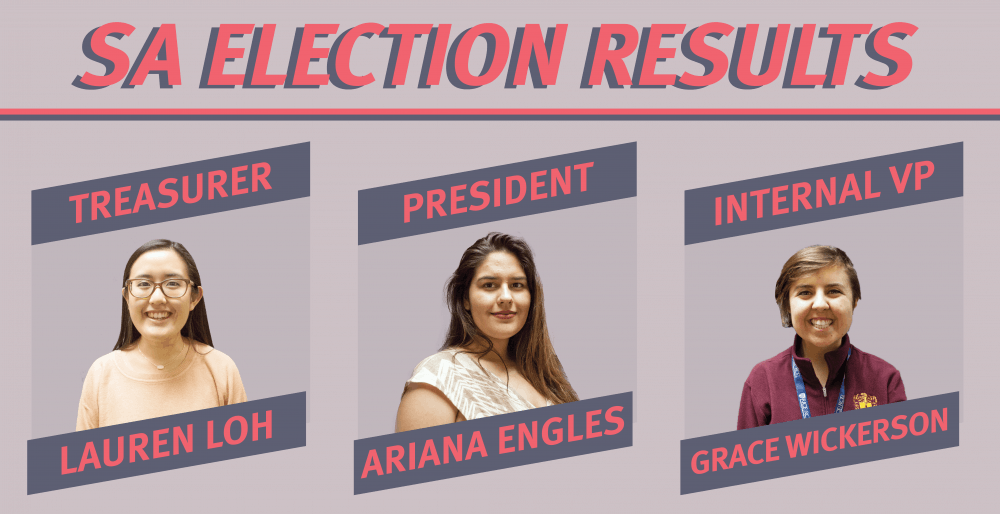 The results came Wednesday night after the close of voting was moved from Monday at 8 p.m. to Wednesday at 8 p.m. An error in the voting setup on Qualtrics that allowed students to enter another student’s NetID caused Director of Elections McKinzie Chambers to distribute a message on Feb. 23 informing students that all votes would need to be recast.

Despite candidate concerns that the election rerun would lead to a decrease in voters, the election broke the SA record for the largest number of voters, with 2047 students casting a ballot – constituting more than 50 percent of the undergraduate body.

The SA utilizes ranked-choice voting, which asks voters to rank candidates and a write-in in order of preference. Afterwards, the candidates with the lowest number of first-choice preferences is eliminated and those votes are allocated to each voter’s highest preferred remaining candidate. This process is repeated until a candidate receives a majority of the votes.

Engles maintained her lead over the other candidates throughout the entire instant runoff process, ultimately obtaining a majority in the fourth round after all votes had been redistributed between her and Farris. Engles won with 53 percent of the vote to second-place Fariss’ 47 percent.

Engles said she was looking to learn from the previous executive committee and start working on time-sensitive issues, including DACA protection, which expires March 5.

“I want to touch base with my team, and see what their priorities are, so that we can start formulating a plan for what we want to accomplish in the next year,” Engles said. “I want to reach out to the administration to start working on temporally pertinent issues, like ensuring that Rice is welcoming and has resources for DACA and undocumented students.”

Engles was the only sophomore participating in this year’s race for president. There are no term limits for SA presidents, according to the SA constitution. Therefore, Engles would be eligible to run for re-election next year. Maryana Iskander (Wiess ‘97) was the first sophomore elected SA president, serving two terms in the position, according to a 2010 release from Rice News. Engles will follow Iskander as the the second sophomore to serve as SA president, according to current SA President Justin Onwenu.

Fariss, Palanki and Gillis shared messages of congratulations to Engles on Facebook soon after the results were released. All candidates praised Engles for her ideas and thanked their supporters.

“[Engles] ran one hell of a race, and as a sophomore no less,” Fariss said in his post. “More importantly, though, is that [she] never once wavered from [her] values as a person.”

Wickerson defeated Duncan College Senator Juliette Turner in the race for internal vice president, obtaining 58 percent of the vote. 1907 students voted for this race, 130 less than for president.

Wickerson said they were excited to receive the news and were going to start working on transitioning into the role to get started on their platform items soon afterwards.

“I definitely said a few expletives [after learning of the win] and then told my really good friend who was with me about it and we screamed a bit,” Wickerson said. “My next step is to start working on IVP changeover with Sara Meadow and then do a lot of strategic planning for all of the initiatives I outlined in my platform and turning them into actionable items that myself and others will need to work on.”

Loh won the race for SA treasurer over Elan Friedland and Siddharth Gorantla with 60 percent of the vote. Friedland and Gortlanta attained 23 percent and 15 percent respectively.

A second round of elections will be held to fill the positions of University Court chair, Campanile editor-in-chief and KTRU station manager as no candidates ran for those positions in the first round election.

Edit Mar. 1 1:16PM: The graphic has been corrected to state that Ariana Engles received 734 first-choice preferences in the second round of the vote. The original version of this graph said she has received 731.