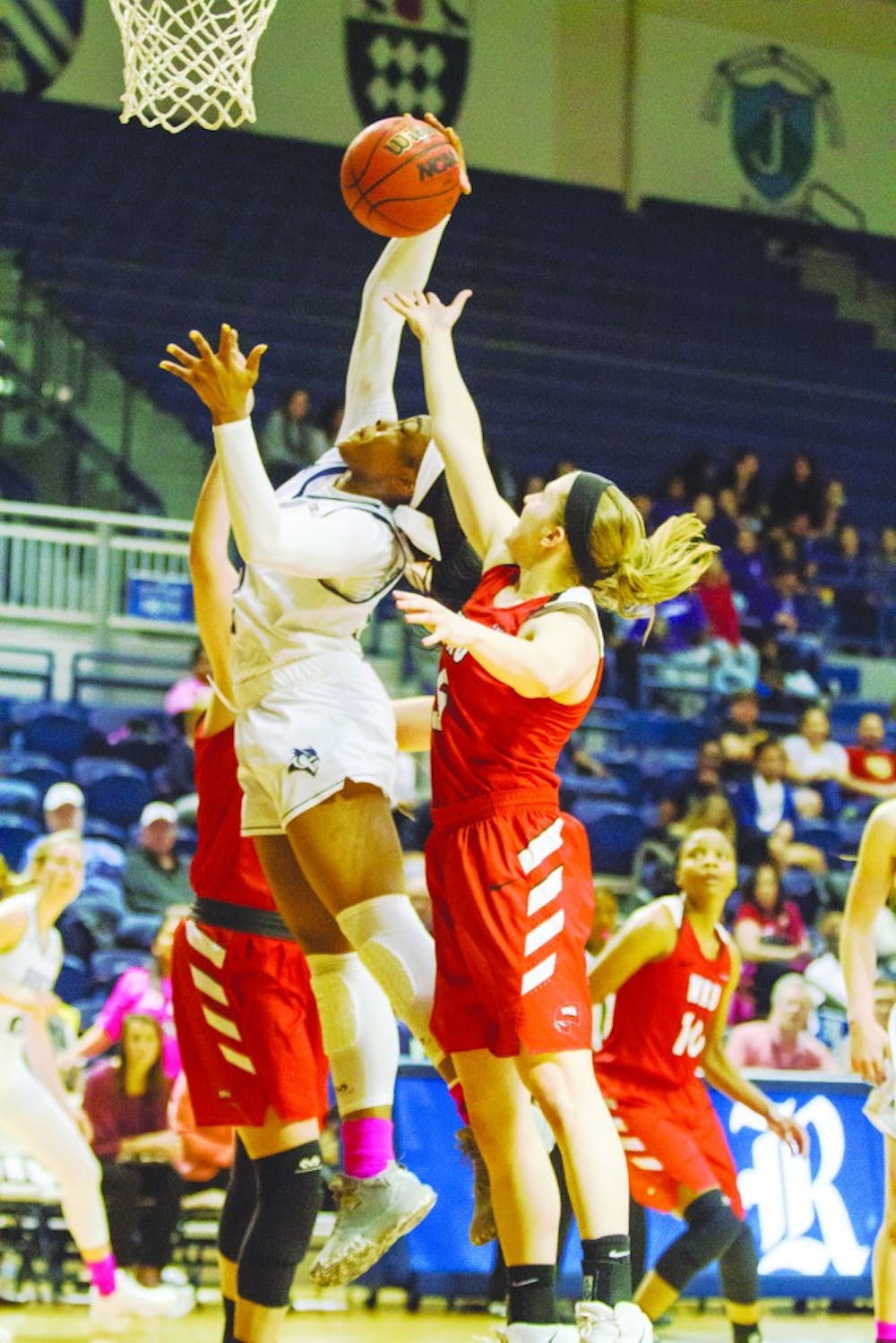 The Rice women’s basketball team captured a signature win Saturday at Tudor Fieldhouse when it defeated conference leader Western Kentucky University 73-58. But the Owls have a quick turnaround. Thursday night, they face off against the University of Alabama, Birmingham, which took the Conference USA lead with WKU’s loss. An Owls’ win would put them in a three-way tie in the loss column for first place in C-USA alongside UAB and WKU.

In Saturday’s victory, the Owls and the Hilltoppers played a tight first half, with Rice holding a 39-34 lead at the break. In the third quarter, however, the home team began to pull away. The Owls took an 11-point lead before WKU stormed back to cut the lead to 55-49 heading into the fourth quarter. But Rice turned up its defensive intensity in the final frame, holding Western Kentucky to just nine points in the final 10 minutes. Late 3-pointers by junior forward Nicole Iademarco and sophomore guard Erica Ogwumike helped seal the 15-point victory. According to head coach Tina Langley, Rice’s composure helped it pull away.

“We have really high-IQ players,” Langley said. “I thought we made really good decisions late in the game … Teams get more and more aggressive defensively, and I thought we played with a lot of toughness and high IQ.”

With the win, the Owls moved into a tie in the loss column with WKU for second place in the conference, just one game behind UAB. Langley said the team recognized the importance of the game but did not approach it differently.

“We’re really focused on us right now,” Langley said. “We had a lot of things we needed to improve on from our last game. [We have] a ton of respect for the teams we play every night and know a lot about them, but the process should be the same. How we practice, how we prepare; those things should be the same every day.”

Thursday’s game against Louisiana Tech University marked the return of junior forward Olivia Ogwumike from an injury suffered early in the season. With her in the lineup, the Owls now have 10 healthy players for the first time all season. Langley said she is excited to to see players recovering from injury at this point in the year.

“It’s great to have several players coming back from injury for us,” Langley said. “The depth was really critical for us today.”

The Owls will head to Birmingham on Thursday in the hopes of moving into the top spot in the conference. UAB is 9-1 in C-USA while the Owls are 8-2. A Rice win would put both teams at 9-2 in conference play with just five games to go in the regular season. WKU is currently 9-2, having played one more game than both the Owls and the Blazers. The top four teams in C-USA will earn first round byes in the conference tournament. Rice is currently two games ahead of fifth-place University of North Carolina, Charlotte.

The Blazers will enter Thursday’s game riding a six-game win streak. Their last loss, and only conference loss, came nearly a month ago, on Jan. 18 against the University of Southern Mississippi. UAB is enjoying a resurgent season this year after finishing 15-15 overall and 8-10 in C-USA in 2016-17. The Blazers reached the 20-win mark with their win over Marshall University on Saturday and are now 20-3 on the season.

Rice’s showdown with UAB will take place Thursday, Feb. 15 at 6 p.m. in Birmingham, Alabama. The game will be broadcast on CUSA.tv.