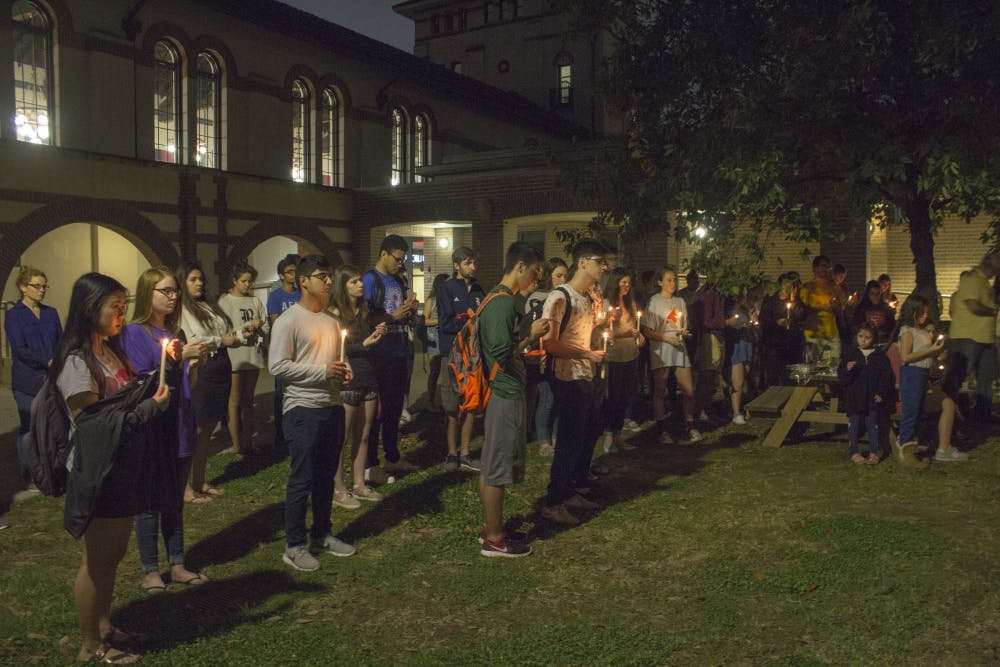 Photo: Serena Liu for the Thresher

Over 20 students and faculty members gathered Sunday evening in the Baker College quad for a vigil remembering victims of the school shooting that occurred at Marjory Stoneman Douglas High School on Wednesday, Feb. 14.

The Baker magisters and president organized the vigil in honor of the school shooting victims. Seventeen students and faculty members were killed in the shooting, making it the ninth-deadliest shooting in United States history since 1949.

Duno-Gottberg and Hutchinson’s speeches echoed each other in their calls for students to “politicize” the issue and turn their discontent into action.

Tate said students should keep in mind that shootings could happen anywhere, recalling the March 1998 school shooting that took five lives in Jonesboro, Arkansas, where Tate had worked as a police officer.

Both Tate and Alejandro reminded students that RUPD officers are trained for active shooters and that the department offers active-shooter training for students to keep themselves safe in such situations.

“A lot of people ask, ‘Hey, are you guys ready in case there’s a situation with an active shooter?’ And the answer is yes,” Alejandro said. “We do carry assault rifles, and we are fully trained in that.”

“Find a group that you’re interested in with respect to this issue, join, keep up on what they’re doing and support them in any way you can, and I think you’ll find it’s actually quite rewarding,” she said.

Students attending the vigil expressed discontent with the increasing frequency of shootings and the need for change. Afterward, a candle-lit minute of silence was held in honor of the victims.

Connor Rothschild, a Martel College freshman, said it is important to reflect on shootings as they occur to avoid normalizing them.

“I think that a vigil like the one we had tonight is a good way to remind the Rice community and anybody who sees us that Rice doesn’t think this kind of atrocity is normal and should be expected,” Rothschild said.

Dean Hutchinson said he was proud of the students for coming together in support.

“We get through sad times by supporting each other, by feeling each other’s humanity, and these vigils are an important part of that,” Hutchinson said.

Duno-Gottberg hosted a similar event while he was magister at Duncan College in the wake of the Sandy Hook shooting in December 2012.

“It’s heartbreaking because here I am again, provoking people to express sorrow and outrage for the slaughter of children,” Duno-Gottberg said. “This is insane. It’s not the first time it’s happened. And that’s shocking.”