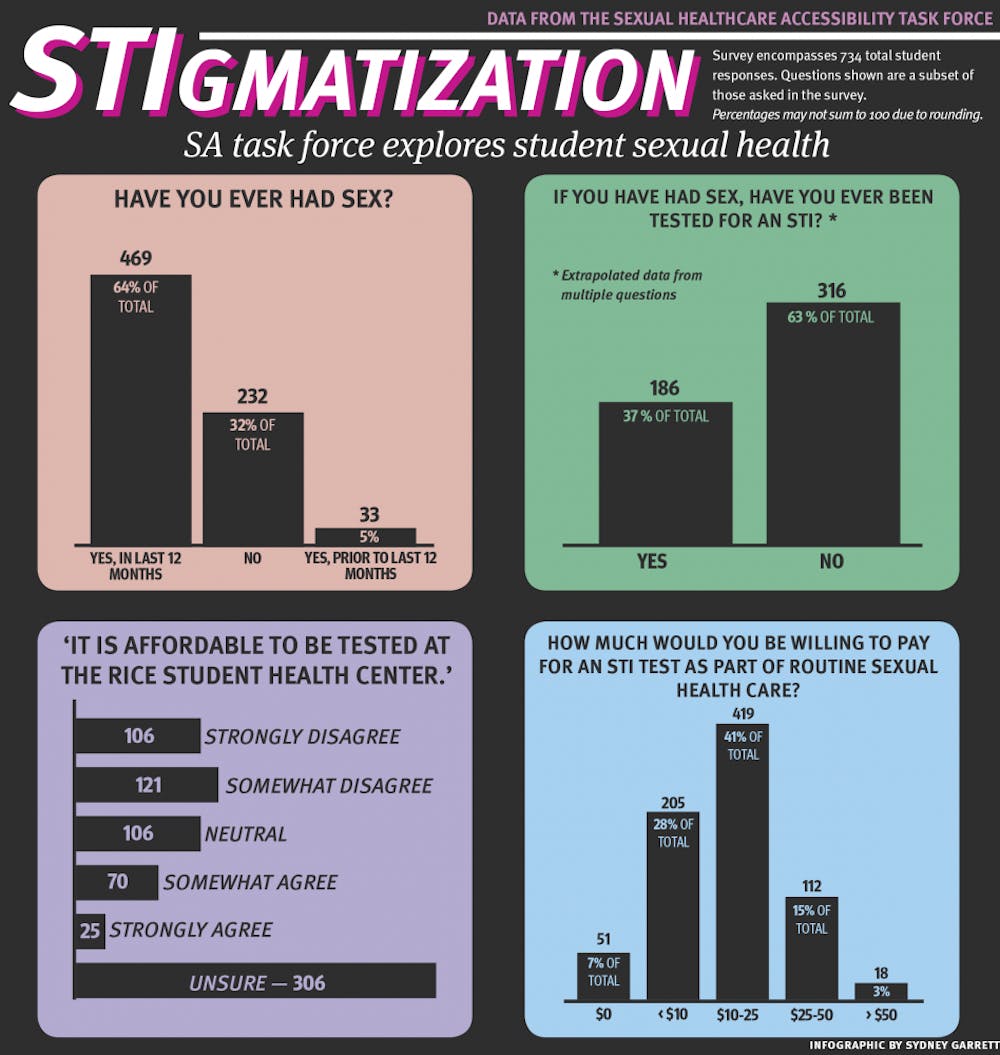 The Student Association Sexual Healthcare Accessibility Task Force has identified a disparity between what students are willing to pay for Sexually Transmitted Infection tests and the prices offered by Health Services from its recent survey on STI testing.

According to director of Student Health Services Dr. Jessica McKelvey, a comprehensive STI test for gonorrhea, chlamydia, HIV and syphilis costs $74. Only 4 percent of the 734 undergraduate respondents were willing to pay this price, while 76 percent of respondents would not pay above $25 for testing.

McKelvey said no further reductions to STI testing costs are expected as they have already been reduced.

“We offer substantial discounts on [STI] testing,” McKelvey said. “We were able to negotiate even further reductions this school year and the price for doing all four tests dropped by $20.”

The survey, which was released Jan. 15, asked students a number of questions related to STI testings. According to Coleman, a Brown College freshman and New Student Representative who co-leads the task force with Brown Senator Grace Wickerson, the survey was online for three weeks and received 734 responses. Wickerson said she believes the number of responses received makes it a large sampling of the student body.

Most students choose to get tested for HIV, syphilis, gonorrhea and chlamydia, according to McKelvey. Individual HIV or syphilis tests fall below $25, while individual tests for gonorrhea or chlamydia cost $46.

McKelvey said that Health Services also offers $195 HPV vaccination shots, for which students under Aetna insurance can be fully reimbursed. According to McKelvey, HPV testing is not recommended for students under 30 years of age as per the US Preventive Services Task Force.

Coleman said compared to other universities, Rice is one of the few that requires students to pay out-of-pocket for STI testing. Coleman said students at Princeton and Columbia Universities are offered free HIV testing, and universities such as Dartmouth and Cornell incorporate testing costs into part of their student health fees.

“That means the health center is not doing enough publicity-wise of getting out that they offer testing,” Coleman said.

Coleman said updating the health center’s webpage on STI testing is one way to improve publicity of the testing services offered. The current page has a total of four sentences and 40 words.

“It’s not very descriptive at all, and if you compare it to other institutions, they have a whole page on their website or something like that dedicated to how the sexual tests work at that campus and what the process is with that,” Coleman said.

Coleman said that the task force is attempting to find out why Rice students are not covered in the same way as students elsewhere despite having the same insurance plan.

McKelvey said testing at Health Services is not covered because the office is not in any insurance company’s network and does not have a billing department.

“Students may use their own insurance for free [STI] testing at outside providers,” McKelvey said.

“Most insurances, including Aetna Student Health, include preventive STD testing as per the U.S. Preventive Services Task Force recommendations. We are not insurance preferred providers as the cost to do this would be astronomical, so the insurance bill does need to be outside of Rice.”

McKelvey also said that in February of 2014, the health center collaborated with a Rice Health Adviser from Wiess College to temporarily offer free HIV testing. The student, who McKelvey did not name, advertised the event himself, and Health Services conducted 52 free tests in one week.

“He obtained a grant through the Dr. Bill [Wilson Student Initiative] Grant at Wiess College to pay for student testing during Valentine’s week,” McKelvey said.”It was a great project and we are glad to collaborate with any student projects in the future.”

Coleman said the survey results will provide a basis to start the conversation about increased sexual healthcare accessibility.

“Honestly, the survey results are almost speaking for themselves in what we really need to do, so we hope with this survey we can reach out to the administration more, just start the discourse,” Coleman said. “Start pushing for the change that we need.”

The Student Association Senate confirmed candidate Kevin Guo’s decision to suspend his campaign for SA treasurer on Monday, removing him from the first round election ballot and freeing him to run for SA external vice president during the second round of elections in April, according to Guo.