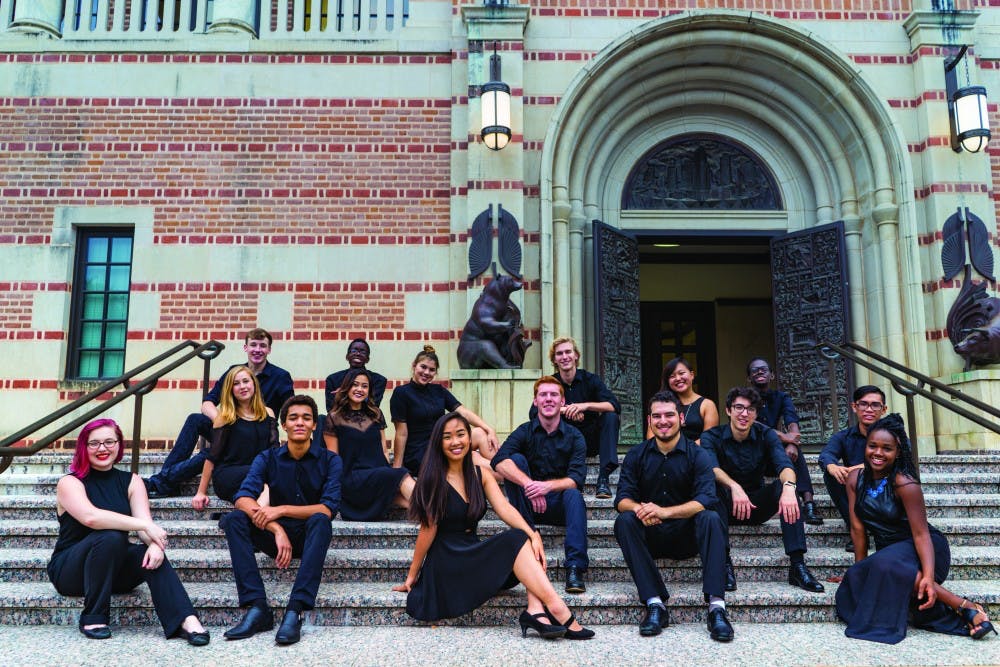 When the announcement comes — the Rice Philharmonics have won first place — the group of 15 Rice students, dressed in black, explode into motion. Together, they half-run, half-walk to accept the award with hands over their mouths, holding hands and grabbing each other in disbelief. They have just won the quarterfinals of the International Championship of Collegiate A Capella, placing the highest they ever had in the history of the group.

Phils music director Veronica Zheng said that no one was expecting first place.

“We were completely shocked,” Zheng, a Baker College sophomore, said. “It was like a Pitch Perfect moment, honestly.”

After a third place finish several years ago and failing to place at ICCA quarterfinals last year, the Phils were mostly just hoping to perform the best they could, Zheng said.

“My expectation honestly was: go there, put on the best show that we can, tell a story,say something with our music — and if we did that I would have been happy,” Zheng said.

As soon as they came off the stage, they realized they had said something: That they were really, really good. It was, said Phils President Kaysie Tam, the best performance they had ever given.

In addition to the overall first place, Phils member Munachi Uzodike received an award for the best soloist.

“When I heard my name being called, I was truly honored, humbled, and truly so grateful to God for the gift of singing and so proud to be part of such a great family of singers,” Uzodike, a Martel College junior, said.

Uzodike was nearly unable to sing due to a sore throat, but was able to pull through in time for her solo.

“It was nothing short of a miracle,” Uzodike said. “I'm still thanking God to this day. Even though I was staying hydrated, taking medicine, and all the other tricks in the book, I still didn't have the strength to hit some of my big notes hours before the competition.”

The group performed three songs: “Let Me Love You” by Justin Bieber, “Final Song” by MØ and “Greenlight” by Lorde. The arrangement of “Greenlight” also sampled the first two songs. They had been practicing those three songs, over and over, for several months.

Former music director Matthew Greene (Sid Richardson ’17) was the only non-Phils member in Nebraska supporting the group. He arranged the Phils’ versions of “Let Me Love You” and “Final Song” last year. From the audience, he could see that the group was performing well.

“At first I thought I was biased, but I could hear people around me whispering good things about them during their performance,” Greene said. “Their dynamics were solid, their choreography was tight, and the crowd loved all of the soloists.”

Greene said he was flattered when he found out that they planned to use the songs he arranged in the ICCA competition.

“I’m impressed with all the work they’ve been putting into singing them because they sound so much fuller and cleaner than they did this time last year,” Greene said.

Tam, a Martel College senior, said that using two of Greene’s arrangements, which many members of the group already knew from the previous year, allowed them to focus most of their energy on perfecting their songs and learning the one new one, “Greenlight.” Besides, the two arrangements already matched the dynamic of the Phils.

“He dedicated his life to the Phils and arranging, so he really mastered what is best for our sound,” Tam said.

Tam arranged “Greenlight” over a two-month period this past summer. She played the song over and over again, trying to isolate the solo parts, then the bass line, and so on until she found the right combinations.

“I would sing different melodies that I heard in my head and see if it fit with the music.”

Tam arranged the song with the ICCA competition in mind, but it was the entire group that decided via a poll last semester that their set would be Greene’s two arrangements as well as Tam’s.

“So much of what we do is a democracy, so we wanted to let everyone have an opinion about what songs they wanted to take,” Tam said.

After months of preparation, the group piled into three cars and drove straight from Houston to Nebraska. On the way they encountered a snowstorm, which none of drivers had ever experienced driven through before.

“It was one degree, the coldest I have ever been,” Zheng said. “My car has never been in temperatures that cold so I thought it was going to die but it didn’t.”

Their hosts were members of rival a capella groups from the area who were also competing against the Phils.

“They were so kind to us,” Zheng said. “Apparently there’s this thing called ‘Nebraska nice.’ They made us feel at home.”

To protect the group’s voices for the performance, Tam had put a singing ban on all the cars for the entire 15-hour car ride. On the way back, though, they celebrated.

“We blasted music and we were singing and yelling and just talking,” Tam said. “Every five minutes, we were like, guys, we just won first place. That was us.”

Their next trip, to the ICCA semifinals in Phoenix, Arizona on March 31, won’t be a road trip. Tam felt that the 18 hours in a car each way, excluding rest stops, was too much to ask of the group. The Phils will be flying instead, but plane tickets pose a huge financial hurdle.

To make up the difference, Tam is kicking around a few ideas: maybe a bake sale, maybe some open mic nights outside of Rice where they can ask for donations.

“I say I want to do all these things, but I don’t know what’ll happen,” Tam said.

Zheng, who oversees rehearsals as music director, plans to implement a few changes to the set before March based on what the group saw from other a capella groups. Above all, though, Zheng wants to keep the pressure of the next ICCAs competition from changing the dynamic of the Phils.

“I’m going to try to be more strict about efficiency, but if we don’t have fun in rehearsals there’s not really a point,” Zheng said. “That’s why we started the group, that’s why we do this, so I don’t want to take that out of it. But I feel like since we’ve all gotten a taste of what it’s like to win now, naturally we’ll want to work harder.”

Zheng said that she was grateful for how hard the Phils worked for the competition.

“Everybody really pulled through,” Zheng said. “It’s been a great adventure.”

Watch some of the Philharmonic's past performances here:

Correction: An earlier version of this article stated that the first place win allowed the Phils to advance the furthest they ever had. The Phils made it to the ICCA semifinals in 2009, but the first place is the highest place award they have ever received at the quarterfinals.