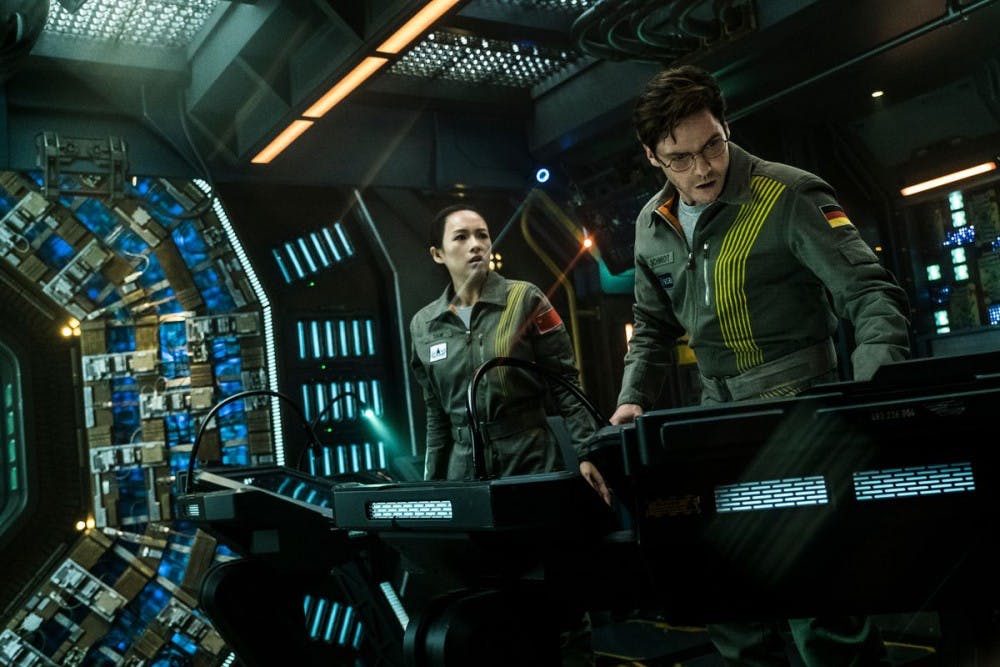 During Super Bowl LII, Netflix dropped the first trailer for “The Cloverfield Paradox,” the third installment in the fascinating, ever-shifting Cloverfield franchise that began in 2008. In a ground-breaking move, the company released the film only a couple hours later. However, while the movie’s release is revolutionary, the feature itself is anything but; it’s a derivative, dull affair without a coherent story or engaging characters.

The film follows Ava (Gugu Mbatha-Raw), an astronaut who attempts to solve an energy crisis using a particle accelerator aboard the Cloverfield space station with the help of her fellow crew members. When an accident transports the station to another dimension, the crew must find a way back home.

While the basic premise has potential, its promise is squandered by the film’s execution. The film’s editing moves at an incomprehensible pace, leaving almost no time to develop any of the many characters or even explain what is going on without ham-fisted exposition. The plot progression is trite, mimicking story beats from a barrage of other space thrillers like “Alien” and “Sunshine.” The elements that aren’t hackneyed seem shoehorned into the story, not connecting to the main proceedings in any fashion. This is possibly a result of the extensive reshoots that changed the flick from a standalone sci-fi thriller to a part of the Cloverfield series.

Furthermore, the movie wastes a stacked cast of performers. While Mbatha-Raw has a decent arc as the main character, acclaimed thespians like David Oyelowo, Daniel Bruhl and Elizabeth Debicki try their best to breathe life into their roles but cannot overcome the lackluster writing. Chris O’Dowd seems to be in an entirely different film altogether, playing his part as if he were in a spoof rather than a drama. Terrible tragedies befall the characters, and while the stakes are exceedingly high, it is nonetheless difficult to care about what occurs on-screen. Without interesting characters for the audience to feel invested in, the film has little tension, thereby making life-or-death situations seem tedious.

The film’s technical aspects are better. The visuals, from cinematography to the set design, are quite well done, though the numerable CGI effects are quite inconsistent in believability. Bear McCreary’s score is fantastic, creating an emotional, exciting mood that the movie’s story cannot live up to. The film’s overall production is perfectly competent but not excellent enough to distract from the messiness that defines the feature’s other aspects.

Altogether, “The Cloverfield Paradox” is a massively disappointing entry into a previously high-quality series, bungling its storytelling through underdeveloped characters, scatterbrained editing and pacing, cliché plot points and unnecessary, poorly thought-out connections to the original “Cloverfield” from 2008. While the movie’s marketing may have been inspired, the film is anything but.

The Cloverfield Paradox is streaming now on Netflix. Watch the trailer below:

You're not losing your mind. Watch The Cloverfield Paradox now. Only on Netflix. Watch The Cloverfield Project: https://www.netflix.com/title/80134431 SUBSCRIBE: http://bit.ly/29qBUt7 About Netflix: Netflix is the world's leading Internet television network with over 117 million members in over 190 countries enjoying more than 125 million hours of TV shows and movies per day, including original series, documentaries and feature films. Members can watch as much as they want, anytime, anywhere, on nearly any Internet-connected screen.