​The album has something for everyone, whether it’s hearing Future sing “slob on my knob” in falsetto, vibing to Sjava serenading in Zulu, or just enjoying the fact that Disney finally approved swear words for their PG-13 soundtracks. Rating: 4.5 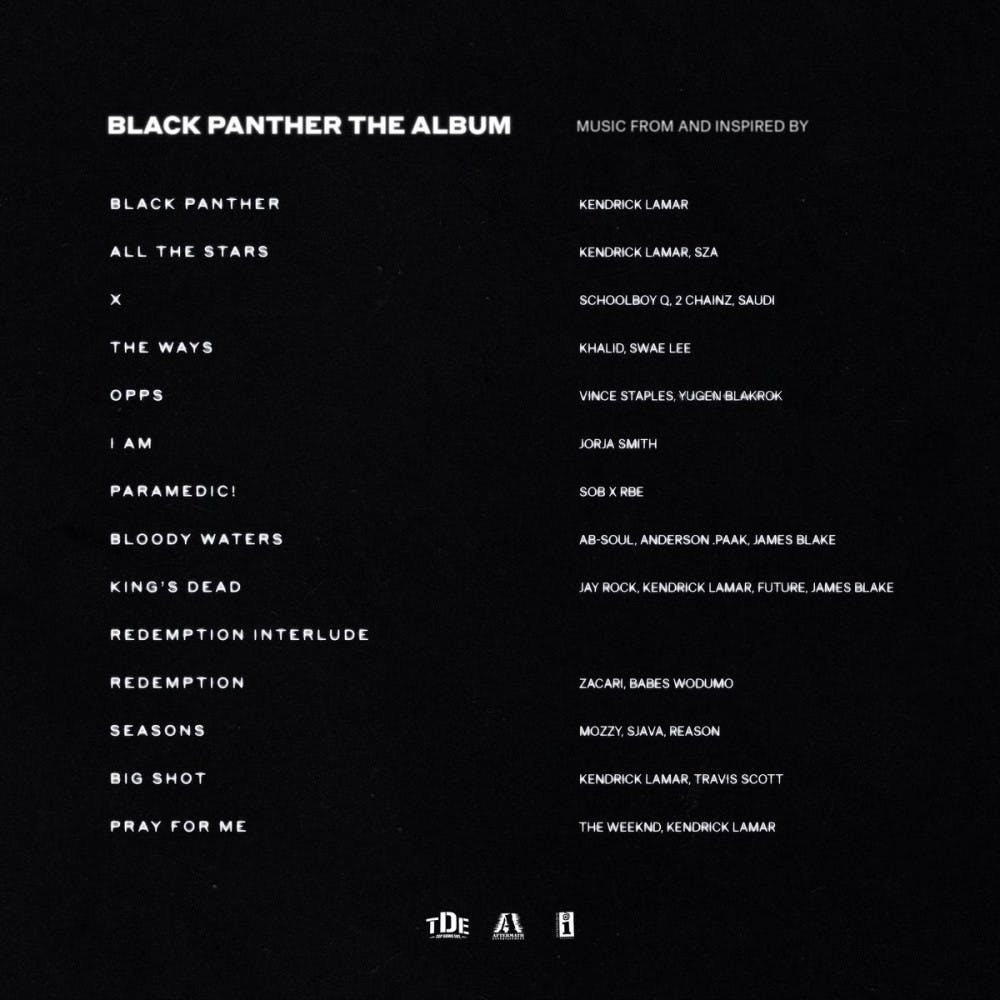 The highly anticipated film, “Black Panther,” is shattering opening-weekend records, becoming the fifth-biggest domestic opening of all time. With it rises “Black Panther The Album (From and Inspired By),” an equally diverse and weighty soundtrack album produced by Top Dawg Entertainment. Debuting at Billboard’s No.1, the album has the biggest charting week for a soundtrack in over a year. Ambitious and fresh, “Black Panther the Album” successfully blends eclectic genres and moods to redefine expectations for soundtracks — goodbye “La La Land” melodies and hello rap, R&B, gqom and everything in between.

“Soundtrack” is somewhat of a misnomer for the album, since only three songs make an actual appearance in the film: “All the Stars,” “Opps” and “Pray for Me.” Still, the album evokes the entire spectrum of moods expected from a record-breaking film: at times brooding and dark, other times hopeful and sweet. The album ties references from the movie and its lore to real, prominent issues that black Americans face. As Top Dawg Entertainment producer Sounwave told NPR, “The movie’s not set in 1910 … It’s set in today. There’s ‘today’ moments happening in the movie, so we want the whole soundtrack to sound like that too.”

Such an ambitious project requires an equally ambitious vision. Handpicked by movie director Ryan Coogler, Kendrick Lamar is the star and the primary visionary of the album,bringing his characteristic commentary and imaginative allusions with hard-hitting verses. It’s hard to imagine anyone else ending “Black Panther” with “I am T’Challa” while also paradoxically declaring “I am Killmonger” on “Paramedic.” Lamar plays a role in almost every song, and his unique choruses weave a distinctive thread throughout.

Produced by TDE, it’s safe to say that the album is stacked with recognizable talent. Besides Lamar, break-out R&B artists SZA and Khalid croon melodies next to modern hip-hop stars Future and Travis Scott. But the best parts of the album come from less familiar names. English songwriter Jorja Smith steals the show with a thrilling melody on “I Am,” while Sacramento group SOB x RBE delivers the strongest rap performance on the album with “Paramedic.” South African female rapper Yugen Blakrok out-performs Vince Staples (Who knew that was possible?) on “Opps.” To tie it all together, producer Sounwave backs each song with skillfully deployed drum beats and electronics that meld and flow from song to song.

Kendrick fans expecting another “To Pimp a Butterfly” might be disappointed — “Black Panther the Album” is, after all, a group project with commercial goals and content restrictions. For me, it doesn’t matter. The album has something for everyone — whether it’s hearing Future sing “slob on my knob” in falsetto, vibing to Sjava serenading in Zulu, or just enjoying the fact that Disney finally approved swear words for their PG-13 soundtracks.