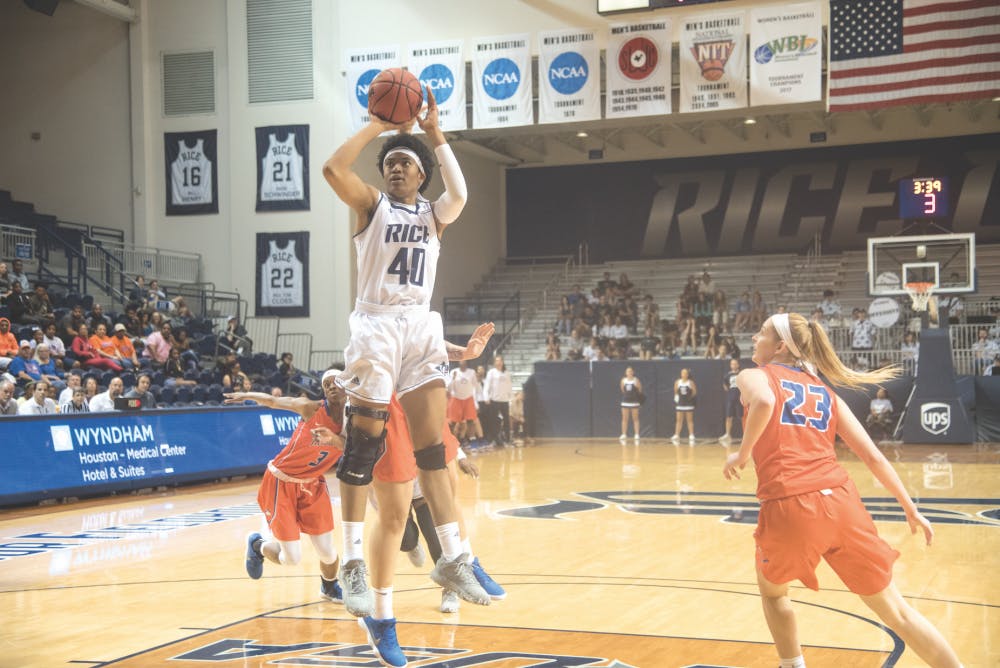 RIce has started the season 12-2 and 2-0 in conference play despite a roster with just nine healthy players, including sophomore center Gabby Ozoude (above). Photo by Jiayi Lu for The Thresher.

It’s been a successful start to the season for Rice University women’s basketball. A year after winning the Women’s Basketball Invitational and notching 22 wins, second-highest in program history, the Owls have shown no signs of letting up in a 12-2 start this year.

The Owls began the season on a five-game winning streak before dropping consecutive games to the University of Kansas and No. 18 Texas A&M University. But they have been undefeated since the loss to A&M on Nov. 29, racking up seven straight wins — their longest winning streak since the 2005-06 season. As a result, in the most recent ESPN mid-major women’s basketball rankings, Rice rose five spots to achieve the No. 5 overall spot.

Wrapping up their out-of-conference schedule with a 23-point victory over Columbia University on Dec. 30, Rice began conference play by defeating the University of North Texas 50-49 last Friday in a back-and-forth affair that saw four lead changes in the last 40 seconds of the game. After North Texas took the lead with under five seconds to play, two free throws by redshirt sophomore guard Erica Ogwumike put the Owls up for good with just one second remaining.

Rice added onto its perfect start to conference play on Sunday with a convincing 83-52 victory over the University of Texas, San Antonio. The win was headlined by the Owls’ accurate 3-point shooting, with 14 makes on 26 attempts. Junior guard Nicole Iademarco was the top scorer, with 21 points on 8-for-13 shooting, including 5-for-9 from 3-point range.

For the Owls, the game marked a continuation of this season’s 3-point success: A year after setting a program single-season record with 242 3-pointers, the team is on pace to rewrite the record books once again, with 124 makes through their first 14 games. They lead the conference in total threes made and are second in 3-point field goal percentage. The Owls’ overall field goal percentage is also second-best in the conference.

Head coach Tina Langley said one of the team’s main focuses this year is getting quality looks on their shots.

“Our focus is efficiency,” Langley said. “We always want to take the best available shot, and we want it to be uncontested, and a lot of times that’s a layup or a 3.”

Langley said she has been impressed with the ball movement that the Owls have been displaying lately.

“We have a really unselfish team; I’ve said that many times,” Langley said. “When we come out and move the ball and play as a unit, you see a lot of good things happen.”

Currently, Ogwumike is averaging almost 18 points and 10 rebounds on the year, placing her fourth and second in C-USA, respectively. Langley said Ogwumike’s value to the team is multifaceted.

“[Ogwumike] impacts the game in a ton of ways,” Langley said. “The way she passes, the way she rebounds, and the way she scores the ball: She’s shooting an incredibly high percentage.”

With the win on Sunday, the Owls remained undefeated at home this season, with a 6-0 record.

“Our fans have been tremendous,” Langley said. “The support has been great, and [we’re] glad to be able to play well in front of them.”

This week, the Owls travel to the Sunshine State to play conference rivals Florida Atlantic University on Thursday and Florida International University on Saturday. Their next home game is on Jan. 26 against the University of Texas, El Paso.