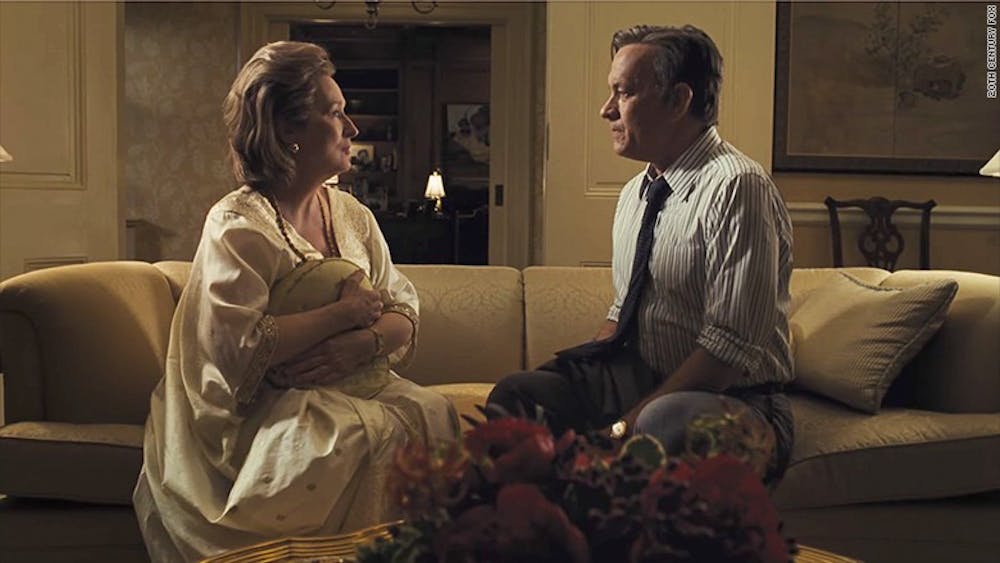 “Before Watergate, there was the Pentagon Papers.” This was the first sentence of the summary for a screenplay, titled “The Post,” on the 2016 Black List, an annual compilation of the movie industry’s best unproduced scripts. The story follows the Washington Post’s role in revealing a damning classified study about the Vietnam War to the public. Written by Liz Hannah and Josh Singer and directed by paragon Steven Spielberg, “The Post” milks its timeliness and tells how one woman’s bravery led to a major First Amendment victory for America’s journalists.

In 1971, Katharine “Kay” Graham is the first woman in charge of a major American newspaper. A widow with no previous experience as an executive, she struggles against the gender politics of the era and her own insecurities to make her voice heard at company meetings and in the boardroom. When The New York Times reveals the government has been lying about the war in Vietnam, the executive editor of The Washington Post, Ben Bradlee, calls most of the shots for how they will handle the information they have. Before long, a furious President Nixon uses his governing powers to bar the Times from further story publications, which presents a major opportunity for both Kay and the Post. This is their chance to stand up for the First Amendment by continuing the Times’ work. But as the head of the Post, a position she could never have envisioned, it’s ultimately Kay’s call on whether to publish.

In the role of Kay Graham, Meryl Streep is one heck of an inspiration. Her ability to keep the viewer rooted in Kay’s emotions at any given moment makes genuinely palpable the transformation Kay undergoes, from self-conscious and doubtful to assertive and confident. Kay makes the switch in a remarkable sequence — the camera close up on her face, her stammering switch to complete seriousness as she says, over the phone, “Let’s go. Let’s go. Let’s go. Let’s publish.” Tom Hanks as Ben Bradlee strikes a perfect balance between supporting player and leading man. He captures Bradlee’s infectious passion for the power of journalism as well as his determination to quickly but accurately get the truth out. He wants everyone to play their part in contributing to a bigger picture, and that extends to Kay. He knows she’s got the fire to lead the paper, and he’s not afraid to respectfully push her to help her see it. And, when she finds it, he’s happy to step aside to give her space on the pedestal. As Ben’s wife, Tony Bradlee, Sarah Paulson gives a wonderful fleshed out performance despite her limited screen time. The glimpses of Tony depict her as a woman who keeps herself in the know and makes her own decisions, while remaining supportive and understanding.

Hannah and Singer’s screenplay is wonderfully inclusive in its representation of gender. Each character, from Kay to Bradlee’s young daughter, feels like a flesh-and-blood human being with a past, a present and a future. The characterizations are respectful of everyone’s humanity, both the good parts and the parts to improvement. The pacing keeps us engrossed, even if we may already know the outcome. The story is ultimately optimistic because it shows the heights we’re capable of reaching when we use our gifts to make the world a better place.

When Steven Spielberg read the unknown screenplay, he said the story had to be brought to the screen immediately. In the movie business, a rushed production often leads to a poor-quality picture. But, in this case, striking while the iron was hot led to an almost-certain Best Picture nomination and the emergence of Hannah and Singer as brilliant new screenwriters. At the showing I attended, the almost-full theater burst into applause at the end, a reaction I have not seen toward a non-blockbuster movie in a long time. Educational, thought-provoking and uplifting, “The Post” is some wickedly good cinema that’s worth setting aside time to see.

The Post is playing in theaters now. See the trailer below:

Steven Spielberg directs Meryl Streep and Tom Hanks in The Post, a thrilling drama about the unlikely partnership between The Washington Post's Katharine Graham (Streep), the first female publisher of a major American newspaper, and editor Ben Bradlee (Hanks), as they race to catch up with The New York Times to expose a massive cover-up of government secrets that spanned three decades and four U.S.

5 Native American artists you should know

November is National Native American Heritage Month, a time to appreciate the achievements and contributions of Native American peoples across the United States. In honor of this month, here are five Native American artists whose work provides a glimpse into the beauty and diversity of Indigenous cultures and what they embody.