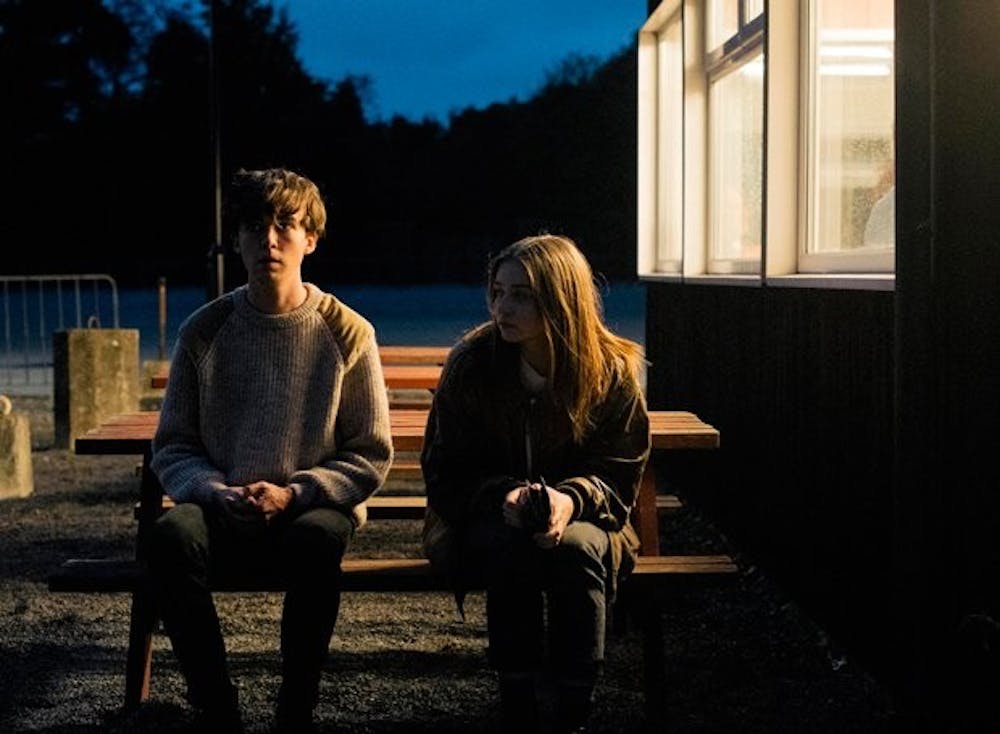 British high school outcasts James and Alyssa find themselves in a romantic relationship and legal trouble in ‘The End of the F***ing World.’

Combine a 17-year-old psychopath and an angsty teen girl and what do you get? A surprisingly touching love story and one hell of an adventure. The new Netflix series “The End of the F***king World” premiered internationally on Jan. 5 and follows British high schoolers James and Alyssa, both equally tortured by the world around them. James is a self-diagnosed sociopath whose only “hobby” is murdering animals and inflicting pain as a way to feel something. Now he’s ready to move on to a bigger project: his first human kill. That’s where Alyssa comes in — the tomboyish new girl in school takes an interest in James after feeling frustrated with her self-obsessed and shallow classmates. James decides Alyssa will be his first victim, while Alyssa determines James will be her first love — talk about not being on the same page. But this unlikely companionship encourages a newfound courage in the pair as they run away from their troubled homes with nothing but the clothes on their back and a stolen car. It’s not long before disaster strikes, and they find themselves with the police on their trail for theft and murder while they deal with their developing feelings for each other.

Season one contains eight 18-minute episodes, making TEOTFW fast paced and easily binge-able. Its dark comedy and crude language, combined with the sensitive moments of young love and friendship, create a diverse storyline that reflects the ups and downs of adolescence. The series evokes feelings of a modern- day “Bonnie and Clyde” or “Thelma & Louise,” where, despite their criminal behavior, viewers can’t help but root for the duo.

The writing keeps episodes interesting, providing a mix of dialogue and inner monologue, a genius decision when dealing with two teen main characters who have a knack for repressing their feelings and lying. Insight into James’ and Alyssa’s heads induces viewer empathy by revealing that these two rough, unruly kids are actually quite soft and vulnerable on the inside.

James and Alyssa are a refreshing take on 21st-century teens, refusing to conform to societal norms or uphold admirable reputations. Alyssa smashes her cell phone on the floor after a classmate texts her from across the lunch table, sneering, “I’m literally here,” and James confesses he doesn’t have a cell phone because he hates them.

Still, although James and Alyssa share their outcast status, their contrasting personalities create a power dynamic in their relationship. Alyssa is demanding, outspoken, and explicit, while James is rather indifferent and dull, making their interactions mostly a series of commands and compliance (which tends to be fairly humorous). The beginning of their relationship is full of confusion and cringe-worthy moments as they force romance and intimacy, as they’re both new to dating, complete with awkward makeout sessions and a first date that ends with Alyssa calling the waitress a “fucking cunt.” Yet, the spectacular character development is what makes TEOTFW so worthwhile. Viewers watch James and Alyssa’s forced feelings transform into something sincere, while the pair also learns how to come to terms with their inner turmoils and the consequences that come with their decisions.

“The End of the F***king World” puts a sinister twist on the coming-of-age of story. It’s common for teens to go through times of rebellion or disbelonging, but with the opening line “I’m James. I’m 17. And I’m pretty sure I’m a psychopath,” TEOTFW immediately takes teen angst a step further. Still, the series retains relatability despite its dark themes. James and Alyssa struggle with the idea of sex, insecurities and being misunderstood just like any other 17 year old does. “The End of the F***king World” strays far from cliché and will have you crying, grimacing and laughing in under 20 minutes, making it a truly unique and exceptional series.

The End of the F***king World is streaming now on Netflix. Watch the trailer below:

The End of the F**king World | Official Trailer [HD] | Netflix