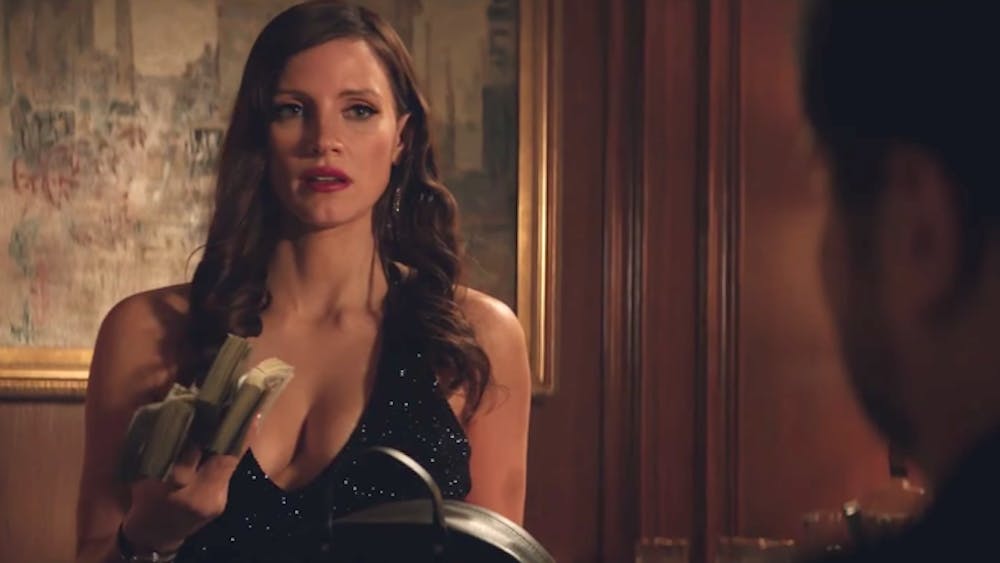 “Poker isn’t a game of chance. Poker is game of skill.” So says Molly Bloom, the protagonist of “Molly’s Game.” For approximately a decade, the real-life Bloom, dubbed the “Poker Princess,” ran high-stakes poker games in Los Angeles and New York City. She chronicled these events, as well as her 2013 arrest by the FBI and the trial that ultimately sentenced her to probation over jail time, in her 2014 memoir, also titled “Molly’s Game.” Written and directed by legendary screenwriter Aaron Sorkin, the fast and furious energy of the film adaptation dares one to keep their head above water.

Growing up in a family of overachievers led by a domineering father, Molly Bloom is taught to equate exhaustion with weakness. Under his demands, she becomes an Olympic-level skier and plans on attending law school. But when a spectacular accident at a qualifying run for the 2002 Winter Olympics permanently ends her athletic career, Molly puts her academics on hold to live in Los Angeles. Her family cuts her off for this decision, so Molly takes a job as a personal assistant, where her boss asks her to help him run his weekly poker games. By the time he fires her, Molly has learned enough about the game to be able to set up her own decadent game nights. Along the way, though, the players’ insatiable desire for thrills, money and power rubs off on her, climaxing into a destructive tumble, like the one that led her to the games in the first place.

In his directorial debut, Aaron Sorkin directs the way he writes his screenplays — musically, tightly and with nonstop momentum. The dialogue, much of it voiceover from Molly, has a rhythm that commands attention, even when the viewer might not understand all of the poker or legal jargon. The film always cuts to the chase, and, once the train’s left the station, you’ve got to stay on until the very end. The lead players, Molly (Jessica Chastain) and her lawyer Charlie (Idris Elba), amaze with their insane ability to fire off lengthy passages of Sorkinian dialogue at top speed without taking a breath. Just when you think you can relax, you’re off to the races with them again. Michael Cera, as Player X, an actor and regular at Molly’s games, is charming, but ultimately scary, when the character turns out to not be the confidant Molly thought he was. “You’re fucked,” Player X gleefully tells Molly over the phone when she’s pushed out of her own game.

Towards the end of the movie, Molly reveals to Charlie what she’s trying to protect the most as her sentencing date approaches — her name. “Because it’s all I have left!” she yells in a moment reminiscent of the finale of “The Crucible.”’

In a world where people can crash just as quickly as they rise, Molly Bloom is just trying to find success her way. In the end, though she avoided prison, Molly Bloom lost everything. But, oddly, it was telling her story that gave her footing some traction again. If life is a game, then Molly will make sure that her chips stay on the table. And “Molly’s Game” is not one to lose.

Molly's Game is playing in theaters now. Watch the trailer below:

MOLLY'S GAME is based on the true story of Molly Bloom, an Olympic-class skier who ran the world's most exclusive high-stakes poker game for a decade before being arrested in the middle of the night by 17 FBI agents wielding automatic weapons.