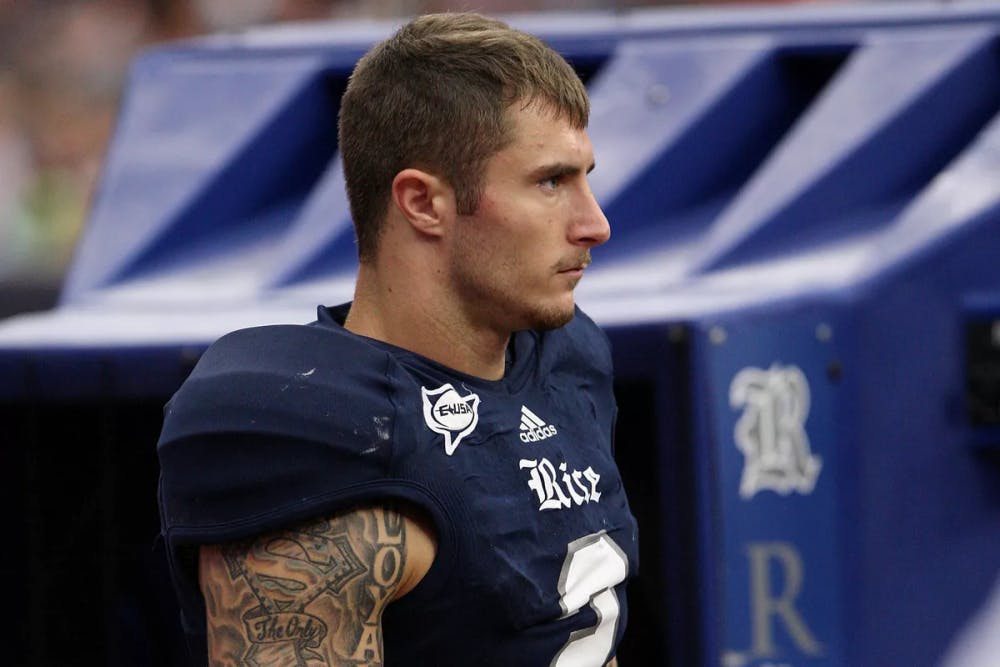 Former Rice football player Sam McGuffie (Class of 2013) was named to the 2018 U.S. Olympic men’s bobsled team on Monday. He will compete at the 2018 Winter Olympics in Pyeongchang, South Korea, both in the four-man race as a member of the push crew and in the two-man as the brakeman for driver Codie Bascue. With his selection to the national team, he will become the first former Rice athlete to compete in the Winter Olympics.

McGuffie was a prep standout at Cy-Fair High School in Cypress, Texas, where he was a four-star recruit whose highlight reels racked up hundreds of thousands of views on YouTube. He then played for the University of Michigan for one year before transferring to Rice following the 2008 season. At Rice, he competed both as a running back and a wide receiver from 2010 to 2012, becoming the first Owls player to total over 1,000 yards in both rushing and receiving and accumulating almost 2,300 all-purpose yards in his three years as an Owl: his 102 career receptions rank him 11th in program history. He was also a prolific track and field athlete at Rice, competing in six different events and medaling in the long jump and heptathlon at the Conference USA championships in 2009 and 2012, respectively.

After landing a spot at training camp with the NFL’s Oakland Raiders, McGuffie bounced around the league on the practice squads of the Arizona Cardinals and New England Patriots without appearing in a game. He then spent a year in the CFL with the Winnipeg Blue Bombers before finding himself out of a job in early 2015 after being cut from the roster. It was then, following the advice of his former Rice track and field coach Casey Thom, that he first ventured into the world of competitive bobsledding. After impressing at a preliminary combine and quickly progressing through a series of trial events, he was selected as a member of the 2015-16 USA Bobsled National Team. Since then, he has competed in three World Cups and two World Championship races, medaling five times, including a gold medal received at the 2017-2018 Two-Man World Cup in Lake Placid. In a statement released by Rice Athletics, McGuffie said he is proud to be the school’s first winter Olympian.

“I’m happy I get to represent Rice University and the city of Houston wherever I go, but especially at the Winter Games,” McGuffie said. “Rice is family. Rice has been behind me when I started out on this crazy adventure in 2015. Hopefully I can represent the university and fellow alumni well. I’m just [really] excited for this opportunity.”

McGuffie will compete in the two-man race on Feb. 18-19 and in the four-man on Feb. 24-25, both at the Olympic Sliding Centre in Pyeongchang.