​‘Jumanji: Welcome to the Jungle’ builds on the ‘90s original 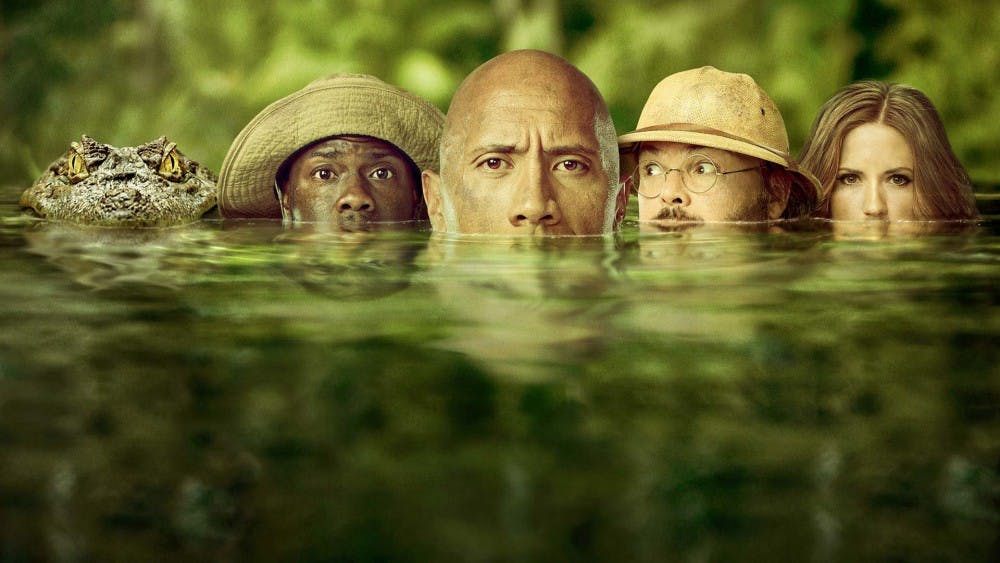 People who grew up in a certain era are often territorially protective of its positive aspects. For children of the ’90s, “Jumanji” was precious, even more so in the wake of Robin Williams’ death in 2014. No wonder they were infuriated when it looked like “Jumanji” would be the next classic film in line for a reboot, in a new era that can’t resist rebooting everything from golden ages past. While most stories of cinematic reboots tend to end in disaster, “Jumanji: Welcome to the Jungle”’s destiny isn’t the trash bin. Instead, in a big surprise, this sequel/reboot is pitch-perfect in its execution because it is built with respectful comprehension of how to grow out of a legacy while forging its own.

One afternoon, four high school teenagers find themselves in detention for a variety of reasons. The room includes athletic Fridge and fearful Spencer, who did Fridge’s homework. The self-absorbed Bethany is there for using her smartphone in class. The shy Martha talked back to her gym teacher. When Spencer finds the old video game “Jumanji” in the school’s messy basement, he and the others decide that, instead of cleaning the basement as they were ordered, they’ll kill time by playing the game. Their wish to totally immerse themselves in “Jumanji” is granted in a supernatural way when the game sucks them into its dangerous jungle world and they find themselves in the bodies of the avatars they chose. Blessed with certain gifts and cursed with particular weaknesses based on their avatars’ profiles, the mismatched teenagers must return a precious jewel to finish the game, a journey that gets more difficult and deadly with each level.

As the adult avatar counterparts of the teenage characters, the performances of Dwayne “The Rock” Johnson, Kevin Hart, Jack Black and Karen Gillan are seamless in their integration of the younger ones’ idiosyncrasies with the different personalities of the video game personas. Hart and Johnson proved themselves to be a duo of uproarious comedic talent in 2016’s “Central Intelligence,” and the pattern continues here. The friends find their relationship’s dynamic turned topsy-turvy since their avatars’ bodies greatly differ from their own. They also find parts of themselves they didn’t know existed. In the body of Smolder Bravestone (Johnson), the easily frightened Spencer is more courageous and confident. In the body of Moose Finbar (Hart), Fridge realizes that he has underestimated his own intelligence. Jack Black is hysterical as Dr. Shelly Oberon, Bethany’s overweight avatar, nailing her initial selfishness while also making it clear that Bethany is learning to work well with others. Karen Gillan spectacularly uses body language and vocals to convey Martha’s discomfort with, then embrace of, herself and her body as the kickass Ruby Roundhouse avatar. Whether Gillan is speaking in an insecure teenage cadence or keeping her arms tightly crossed around her bare midriff, she’s so spot-on imitating Morgan Turner’s mannerisms as the self-conscious Martha. It makes one wonder if Gillan and Turner spent time together in pre-production to make it all flow.

At certain points, each of the teenagers, as their avatar, finds themself down to their last “life” in the game, where anything could end them. Do they play it safe, or risk it all? Fridge comes to realize that that’s real life in a nutshell. You only live once, so who will you be? It is in moments like these that the depths of the movie’s intelligence emerge and make it so much more than just an adventure story or spiritual sequel. In the difficult choice between playing it safe and taking risks, the cast and creative teams behind “Jumanji: Welcome to the Jungle” chose the latter and, as we speak, are reaping the delightful fruits of what they sowed.

Jumanji is currently playing in theaters. Watch the trailer below:

The game has changed, but the legend continues. Watch the new trailer for #JUMANJI: Welcome To The Jungle now and see it in theaters this Christmas! In theaters December 20.