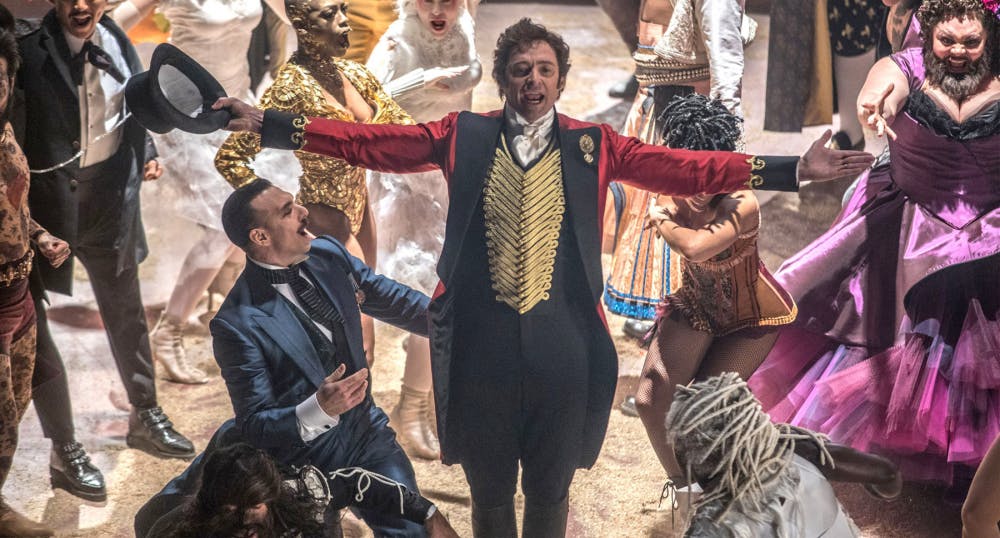 Hugh Jackman glows as P.T. Barnum in ‘The Greatest Showman,’ a biographical musical about the creation of the Barnum & Bailey Circus.

The story of “The Greatest Showman” follows P.T. Barnum (played by Hugh Jackman) as he chases his ambition of creating — you guessed it — the greatest show on Earth. Along the way, Barnum incorporates some of New York’s “human oddities” (including a bearded lady and an incredibly short man) into his act, partners with upper-class businessman Phillip Carlyle (Zac Efron), and struggles against the entertainment snobs and outright prejudiced people of the turn of the 20th century to create the first instance of the modern circus.

The film’s artistic vision is clearly driven by the P.T. Barnum quote shown at the end: “The noblest art is that of making others happy.” Michael Gracey’s direction and Jenny Bicks and Bill Condon’s writing mirror the approach that Barnum used in constructing his show: loosening the storyline to near unravelment, taking spectacle over substance at every turn, and hoping that the performances attract more common people than a stuffier, more traditional film (in Barnum’s case, the opera; in our case, “The Post”). That type of film is an acquired taste for cinema audiences who are used to seeing movies with a directorial objective more specific than “make them happy,” but “Greatest Showman” ultimately achieves its goal.

Some might find the movie frustrating because it paints with an incredibly broad brush. It covers too many storylines, and it covers all of them too casually. For instance, the first 10 minutes of the movie cover the years-long love story of a penniless young Barnum (Ellis Rubin) and his affluent future wife Charity (Skylar Dunn as a child, Michelle Williams as an adult), which could easily be its own movie. Furthermore, while the movie does address some of the difficulties Barnum had in bringing his “human oddities” into the spotlight, it fails to cover the internal struggle these human beings go through to become comfortable being themselves. The movie also doesn’t address how Barnum profited off of audiences laughing at these insecure people.

And yet, despite this approach, or perhaps in part because of it, I still left the theater with a wholesome, happy feeling. Steering away from such a deep dive into the potential negative psychological effects that joining the circus had on these characters speaks to the movie’s conscious choice to be light and fun above all, undoubtedly how Barnum would have wanted it.

The most potent vessel of happiness in “The Greatest Showman” is Benj Pasek and Justin Paul’s score. The pop-bent songwriting duo are well-regarded within musical theater, especially for their Tony-award winning musical “Dear Evan Hansen.” For “The Greatest Showman,” the pair used a creative styling that has soared with Broadway musicals from “West Side Story” to “Hamilton,” scoring an otherwise period piece with contemporary music. The decision results in an exciting set of songs that could easily be on today’s radio, and will certainly be a mainstay on every Broadway buff’s Spotify, but it plays a bit odd, even patronizing, in the cinema.

Furthermore, the cast largely does justice to both the script and score. I commend Efron in particular for doing a movie-musical and showing no signs of his “High School Musical” past, a particularly laudable accomplishment considering that one number sends his character soaring, flying and singing about love into the eyes of Anne Wheeler (Zendaya).

However, the best performer of the movie was Keala Settle as the Bearded Lady. Settle, a Broadway veteran but Hollywood newcomer, captained the emotional ship for the ensemble of misfit human oddities. In a moment of collective self-doubt, Settle breaks into “This is Me,” an anthem for individuality and a rightful frontrunner for Best Original Song at the Oscars.

I personally appreciate the movie much more than my rating might suggest, but I acknowledge that those without my love for musical theater might find it a bit harder to enjoy. If you are looking for a deep-thinking movie or yearning for a realistic retelling of the history of the circus, “The Greatest Showman” is a two-star movie at best. However, if you are looking for a film hoping to succeed in the noblest of arts — making you happy — then it is a four-star movie at worst, and as its opening number will tell you, “The Greatest Showman” is “everything you need and more.”

The Greatest Showman is playing in theaters now. Watch the trailer below:

Inspired by the imagination of P.T. Barnum, The Greatest Showman is an original musical that celebrates the birth of show business & tells of a visionary who rose from nothing to create a spectacle that became a worldwide sensation.