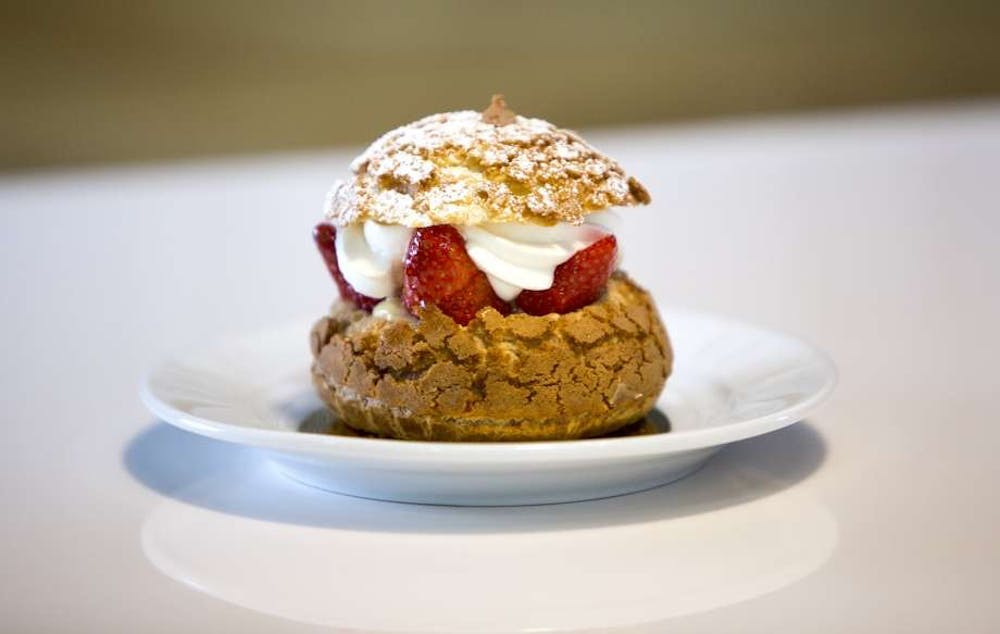 Rather than the traditional “R.I.P,” the three letters on my Tetra’s tombstone will now be “FLO.” Granted, writing this review meant visiting Salento’s successor more than a typical student would or sustainably could. It does, however, seem absurd that spending less than $10 on a drink and snack requires about as much creativity and precision as tattooing. Nevertheless, I made my way to Brochstein Pavilion after an 8 a.m. class. As expected at 9 a.m., it was fairly empty and the sun was streaming generously through Brochstein’s floor-to-ceiling windows. The only change FLO Paris has made to the space is the counter in the center of the room. You interacted with Salento’s cashier at a waist-high gap in the 5-foot wall that contains the kitchen and staff. Now, you place your order with a glass shelf stretched between you and the server, and the food displays are far out of sight.

The staff was very courteous, which almost softened the blow of the insane prices. An Americano costs $5 plus $2 more to make it a double (which is confusing given a latte is only $4, and the former is essentially a latte with hot water instead of steamed milk), and an almond croissant is another $4.50, coming out to $14 after tax. The croissant was warm and for the first few bites, delicious. The outside was flaky and buttery without being greasy. The filling, which seems to be cinnamon sugar, was too sweet for my taste, although the ratio of sweet spread to fluffy pastry layers was ideal. Notably, the croissant was massive. Halfway through, I felt like I was forcing it down to get my money’s worth. So, the trick to frequenting FLO may be to share something with a friend. Although you can’t Venmo Tetra to split the steep price, the exceptional quality in a convenient location almost guarantees you’ll want to come back, and you can alternate picking up the tab.

My next trip to FLO was a sponsored one — free food was the incentive for participating in a group student interview of a candidate for a French professorship. In addition to my rose macaron and cappuccino, the order included two mochas plus raspberry, pistachio and Bailey’s macarons. The cookie struck the right balance of chewy to crunchy, coupled with a perfectly portioned creamy, cool filling. Its size was modest — one won’t last more than a few bites. All around, the flavors live up to expectations, and at $2.25 per treat, macarons might be the best choice on the menu. The mochas are served in tall glasses to exhibit their striking gradient of foam, latte and chocolate. Everyone paused and admired the aesthetic appeal of what may be the most Instagrammable drinks on campus before stirring and happily sipping them. This is a big step up from Salento’s consistently subpar, overpriced coffee. Ultimately, presentation and service — your order is carried out to your table and your dishes are cleaned up for you — are exceptional.

A few days later I go for lunch around 12:15 p.m., which was awful timing: I waited in line for about 30 minutes. However, I contemplated my order down to the last second. I’m not a vegetarian, but I only eat meat a few times a week. None of the savory crepes were an option. Of the four hot and four cold sandwiches, one of each is meatless. The hot buffalo mozzarella on a baguette and a sparkling water came out to $13. The sandwich and a side salad (or chips) were enthusiastically brought out almost immediately. Its flavors were a satisfying, although typical, Mediterranean blend of roasted pepper, black olives, basil, tomato and eggplant. The baguette was crisp, but “hot sandwich” was a bit of a misnomer — despite the bread’s grill marks, the panini was room temperature. Additionally, it was slightly soggy, an inevitable effect of the marinated eggplant and olive oil. By the time I’ve eaten less than a third, the bottom slice of what remains of the sandwich was getting spongy. The side salad was fine, but the greens were wilting slightly. Again, the portion was quite big and you could definitely split the sandwich or save one of the sliced halves for later.

A full meal with Brochstein’s new vendor, especially at a popular time, isn’t as impressive as a dessert. All things considered, if you find yourself in the situation where a parent, professor or designated rich friend offers to cover the cost of an on-campus hangout, definitely go with the FLO. Otherwise, a macaron, shared pastry or occasional drink (or one carried over from Coffeehouse) is a more feasible way to enjoy the new establishment.

“The album as a whole speaks to the various manifestations of trust that come with love... The best aspects of “Recover” can be seen as subdued elements of the band’s prior albums, and it’s Xayalith and Powers's growth and confidence that can explain the new direction.”