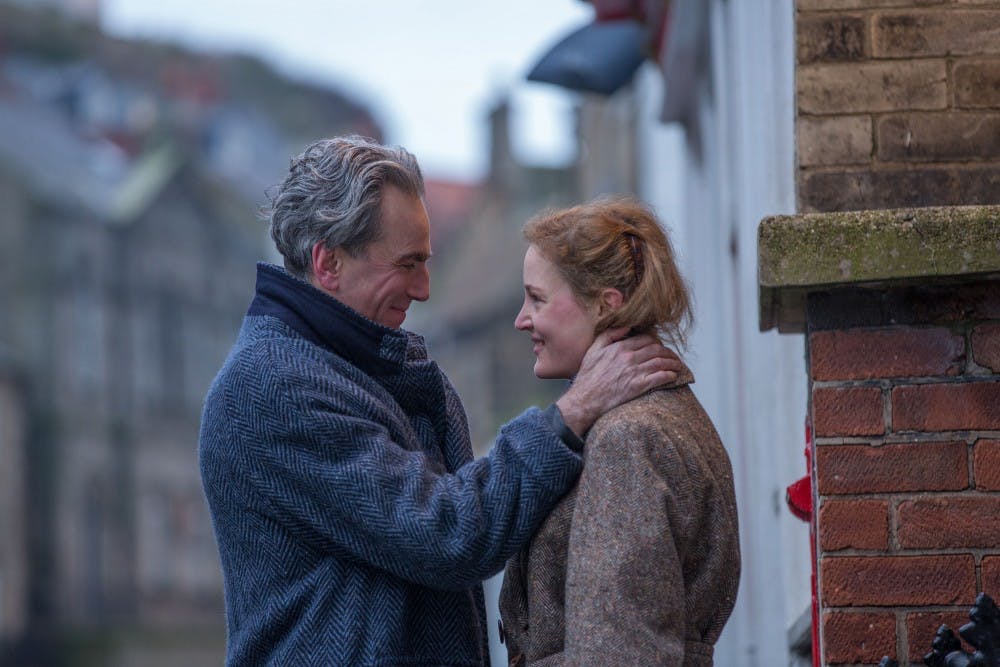 Arguably the greatest actor of his generation, Daniel Day-Lewis claimed this past year to be retiring from the profession. If this holds true, Day-Lewis certainly leaves on a high note in director and writer Paul Thomas Anderson’s “Phantom Thread,” a twisted period romance that once again proves the mastery of all those involved.

Having previously worked together on the epic “There Will Be Blood,” Anderson and Day-Lewis go for an entirely different experience with “Phantom Thread.” This film centers on high-strung British dressmaker Reynolds Woodcock (Day-Lewis) and the fascinating relationships he holds with the women in his life, specifically his sister Cyril (Lesley Manville) and muse Alma (Vicky Krieps).

The film’s most notable strength is its cast. As usual, Day-Lewis is impeccable, completely inhabiting the role of the brilliant, extraordinarily demanding artist. Not to be outdone, Manville and especially Krieps hold their own against him. Manville brings a chilling wit and gravitas to every scene she appears in and Krieps often steals the movie entirely. In many ways, Krieps’ Alma is perhaps more the main character than Day-Lewis’ Reynolds is. When the two interact, they reach levels of sensuality, conflict and disturbance that few on-screen duos ever have.

The movie’s cinematography and score aid in the creation of such emotional heights. Though technically uncredited, Anderson serves as his own cinematographer and in doing so generates the most beautiful visuals of his career. Each frame is utter perfection, from the wide shots of coastal vistas to the close-ups of the actors’ faces. Complementing these gorgeous images is Jonny Greenwood’s luscious score. Greenwood, of Radiohead fame, utilizes a combination of piano and strings that provides a beautifully complex atmosphere to the proceedings.

This mysterious ambience fits right in with the story itself. The plot is untraditional, as it does not follow a clear three-act structure. While things happen, they only seem to occur in the context of the characters’ connections with one another. As the characters develop, so does the story. There is no hero’s journey or grand adventure. The film’s 1950s fashion setting is a backdrop rather than a defining feature. We as the audience mainly observe the dynamic between a complicated man and woman. While this simple premise and its accompanying slow pace occasionally test the audience’s patience, the bizarre twists and turns that come along with romance more than make up for it.

The writing takes on the variety of tones that accompany real-life love affairs. Anderson has always been gifted at mixing narrative tones, and he does so again here. On the surface, the story is a romantic drama. Reynolds and Alma vie for control over one another, each interaction a battle for supremacy. Being as unhealthy as it is, the relationship at times makes the film dark and upsetting. However, the movie also contains a surprising amount of levity. Many of these characters are inherently ridiculous, and the situational comedy that arises from their actions is frequently laugh-out-loud funny. From one moment to another, the movie shifts from hilarious to haunting, but it never feels out of place.

Overall, “Phantom Thread” is another remarkable collaboration between Anderson and Day-Lewis. It is a fascinating original motion picture, a simultaneously comical, depraved and romantic audiovisual feast that spins a tale that will not soon be forgotten by those who are lucky enough to experience it.

Phantom Thread is playing in theaters now. Watch the trailer below:

Watch the official trailer for Paul Thomas Anderson's #PhantomThread, starring Daniel Day-Lewis. In select theaters this Christmas. Set in the glamour of 1950's post-war London, renowned dressmaker Reynolds Woodcock (Daniel Day-Lewis) and his sister Cyril (Lesley Manville) are at the center of British fashion, dressing royalty, movie stars, heiresses, socialites, debutants and dames with the distinct style of The House of Woodcock.