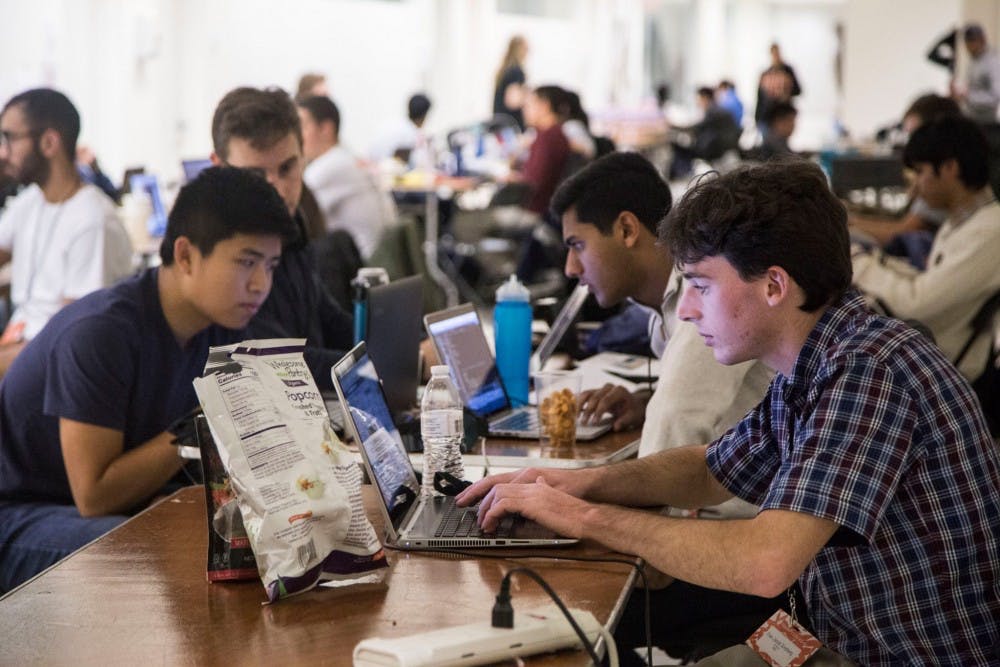 How does the typical Rice freshman spend their time? Probably a healthy(ish) mix of skillful procrastination, stressing out at Fondy, and finding out how much free food it takes to no longer want free food. But if you’re Joel Abraham, you’ve added one major accomplishment to a unique freshman experience: You’ve co-founded a startup, and have investors already knocking at your door.

Abraham, a mathematics and computer science double major at Hanszen College, started the beginnings of his “alternative asset management fund” just three months ago alongside Kevin Zheng, Hunter Sporn and Etan Ginsberg. Zheng and Sporn are current students at Princeton University, and Ginsberg is spending a gap year working at a private equity firm on Wall Street. The company, Everest Capital, uses social media analytics to invest in cryptocurrency.

And it all started at a hackathon in November.

“We met at HackPrinceton 2017, and decided to work on a project together,” Abraham said. “Due to our [skills] in quantitative finance, and due to the burgeoning cryptocurrency hype, we ended up building a primitive trading strategy that leverages social media analytics to predict cryptocurrency prices.”

After the event, a judge came up to the students and expressed interest in the code they had written. Seeing the potential of their work, Abraham and his co-founders started a conversation about turning their code into the basis for a company.

“The mission of Everest Capital is to meet a need in the cryptocurrency marketplace for strategic portfolio management,” Sporn said.

Cryptocurrency is any digital currency that operates on a blockchain (a digital ledger). A blockchain is a collection of independent transactions where is transaction, or block, is timestamped and linked to the previous one, creating a chain. The continuous links between blocks and chains create a transparent system where every person can view any transaction, and the linked nature prevents the ledger from being manipulated.

The system of cryptocurrency works similarly to a debit card, allowing monetary transactions to occur electronically. The difference is that cryptocurrency is decentralized, so there is no central bank, government or even computer system that issues the currency or controls its value. The most popular form of cryptocurrency is Bitcoin. Other cryptocurrencies include Ethereum, Litecoin, and the meme no one should be using at this point, Dogecoin.

“Cryptocurrencies are extremely volatile,” Abraham said. “It’s not uncommon to see the price of Bitcoin fluctuate thousands of dollars in a few hours. This volatility means that there are plenty of opportunities to make a large profit by buying when the price is low and selling when the price is high, since our algorithm allows us to predict when these critical points occur.”

According to a Wall Street Journal article published Jan. 10, Bitcoin’s value has increased 1,446 percent since the end of 2016. The rapid fluctuation in value can create higher risk, which is the main reason traditional hedge funds are hesitant to enter the market. Everest Capital tailors their strategy to be “highly risk averse,” allowing the potential for higher profit without the risk of an irreversibly bad trade.

Even with the risk, it’s not hard to see why Abraham and his co-founders are eager to venture into the world of trading cryptocurrency. The Everest Capital website proclaims that “now is the time to act.”

“Most hedge funds trade very stable equities (e.g. stocks) and thus generate annualized returns of [less than] 100 percent,” Abraham said. “According to extensive backtesting, our algorithm generates returns of 232 percent over the past 50 days, significantly beating the market.”

Algorithm-based trading, while not new, is an alternative to the traditional, human-based Wall Street model that dominated for almost exactly 200 years. From the time algorithm-based trading was first introduced in the early 1970’s, it has become one of the top ways to sustain management funds. To Everest Capital, it’s all about the computers.

The algorithm Everest Capital uses and analyzes social media content, like Tweets, to determine the feelings of people writing those Tweets. Those feelings then become an indicator of public confidence in cryptocurrency. The algorithm combines this with research on how people’s responses to the market price of cryptocurrency changes the price of the currency itself. The continued analysis of all these patterns allow the algorithm to “learn” how to predict trends without any explicit code.

“A recent article published by Business Insider this October concluded that there is a 91 percent correlation between the volume of Google search inquiries about Bitcoin and its market value,” the website said.

Although Everest Capital has been seeing a lot of early success, a startup between four undergraduates across state lines brings about its own set of logistical challenges. Keeping up with new projects, investors, and ideas amid already busy schedules brings difficulty in maintaining communication. Fortunately, the benefits of technology has kept this startup alive, and the students call, text, and video chat regularly.

For now, Everest Capital engages in proprietary trading, where the firm trades using its own money. However, they are working aggressively on their investor base, and already have more than $100,000 in pledged funding.

Abraham sees big plans in the future of Everest Capital.

The startup is a regional finalist for the TigerLaunch entrepreneurship competition and will advance to the Finals Competition in Princeton to compete for $30,000 in prize money and the opportunity to pitch to venture capital firms. They are also one of 32 semifinalist for Student Startup Madness, a competition for college startups. The top eight startups in Student Startup Madness will present to judges at South by Southwest in March.

“In one year, I see our company fully established under a quasi-hedge fund model, with in-house servers and additional employees,” Abraham said. “In five to 10 years, I hope that we’d be established as a Limited Partnership, manage a multimillion dollar fund, and expand our company beyond cryptocurrency trading.”

Edit 01/17/2018 6:40 PM: The article has been corrected to reflect that there are four members of Everest Capital rather than five. The spelling of Hunter Sporn and Kevin Zheng's names have been also corrected.