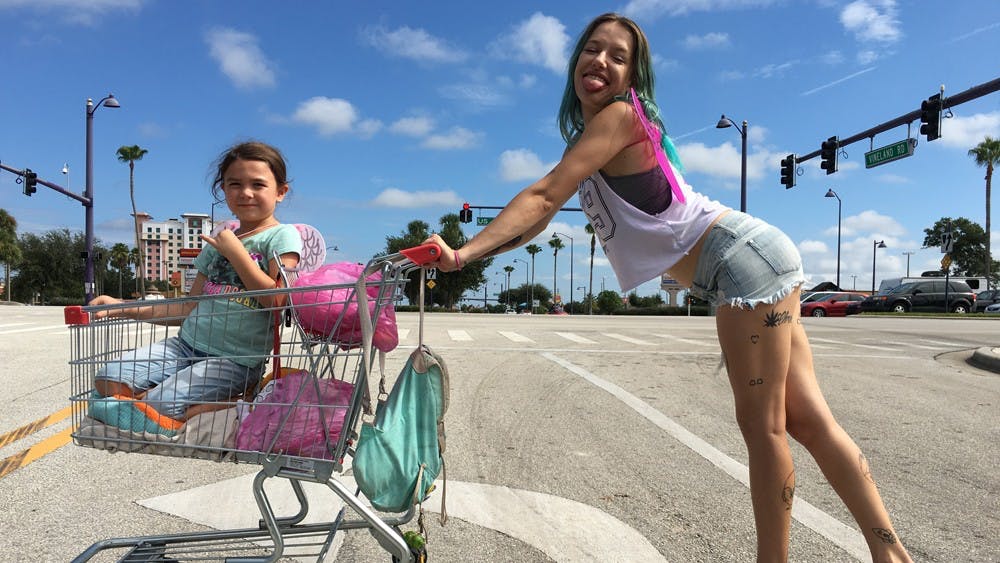 Hollywood creates a portal to escape into worlds where dreams come true and everyone gets a happy ending. It tends not to spend money producing movies about people who neither live the high life nor get there by the time the credits roll. “The Florida Project,” written and directed by Sean Baker, is one of those movies. In spite of its setting in the same city as the Happiest Place on Earth, the story at the center of this independent dramedy is one of hidden homelessness and the inevitability of innocence’s destruction.

Moonee is a carefree, troublemaking 6-year-old who lives at the Magic Castle motel near Walt Disney World. She spends her summer vacation hanging out with fellow rascals Scooty, who lives one floor below her, and Jancey, who lives in the Futureland motel next door. Whether they’re getting “free” ice cream at their favorite ice cream shop or checking out abandoned condos, every day is a spontaneous adventure in their sunny world. While Scooty’s mother and Jancey’s grandmother are responsible parental figures, Moonee’s mother, Halley, is the blaring opposite. An excessively pot-smoking punk who had Moonee as a teenager, Halley is so recklessly immature that she could easily be taken as Moonee’s sister or bestie. As Halley goes to increasingly risky ends to provide for them, her growing desperation could ultimately bring a cruel end to Moonee’s paradise.

Brooklynn Prince, who plays Moonee, is particularly stunning. In a film where improvisation was encouraged even with a set script, everything Prince says sounds exactly like the words of a real 6-year-old. “We were doing an experiment,” she says when caught putting a dead fish in the motel pool. “We were trying to get it back alive.” While so many films try to make their child characters look angelic, Prince is unafraid to go in the opposite direction. Her ability to make Moonee fluctuate between lovable and irritating on a dime, and even play both simultaneously, suggests a maturity beyond her years and the beginning of a great career. First-time actress Bria Vinaite, who Baker found on Instagram, makes Halley compelling even when the character is nerve-grating. Halley makes the audience continually shake their heads at her poor decisions and out-of-control attitude. But Vinaite also emphasizes how much Halley really does love Moonee, going to great lengths to feed and shelter her. Tragically, that love can’t save them. Willem Dafoe gives a warm, patient performance as Bobby, the motel’s tough yet understanding manager. Even though the kids’ antics drive him crazy, he has a soft spot for them, as demonstrated by his struggle to stay poker-faced during a situation involving Child Protective Services.

“The Florida Project” takes place in a dead-end world where wishing on a star won’t change fortunes, and the characters’ financial situations will never allow for a vacation. The people here live day by day, never knowing what’ll come next. This happens every day, everywhere in America, and even the obliviousness that comes with childhood can’t keep cold, hard reality from eventually setting in.

The Florida Project is rated R and showing now in theaters. Watch the trailer below: