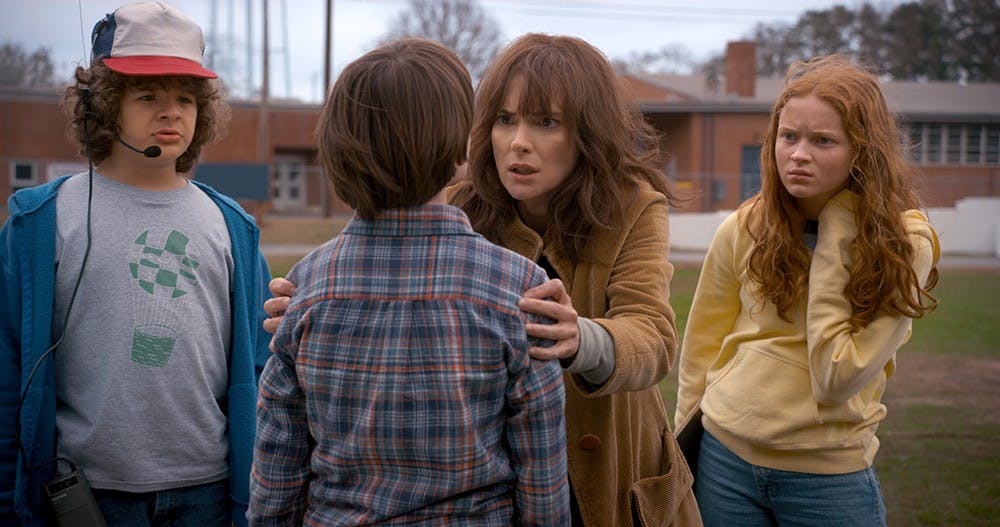 Last summer, Netflix released the 80s-inspired TV show “Stranger Things,” created by brothers Matt and Ross Duffer, to little anticipation. However, word of mouth quickly made the series one of Netflix’s most popular. The show’s hyped second season, which dropped on Oct. 27, mostly recaptures the quality of its predecessor, though narrative missteps make it slightly inferior.

The self-dubbed “Stranger Things 2” picks up almost a year after the first season. The returning characters are still attempting to deal with the repercussions, especially Will Byers (Noah Schnapp), who has recurring visions of the alternate dimension The Upside Down. Eventually, a supernatural threat reappears in their fictional town of Hawkins, Indiana, and they must fight against an impossibly strong evil once more.

The show’s strongest asset continues to be its phenomenal ensemble cast. The group of child actors is easily among the best ever assembled, elevated even further this season by the considerably increased screen time of Schnapp as Will Byers. Though his character was vital to the first season’s plot, Schnapp only truly appeared in the first and last episodes. This season, he demonstrates a level of intensity and emotion that could easily get him nominated for an Emmy. Joe Keery as former-bully-turned-good-guy Steve Harrington proves to be the most likeable and interesting of the teenage performances, and Winona Ryder and David Harbour still shine as the mature centers of the series.

Additions to the cast give it even more depth. “The Lord of the Rings” star Sean Astin is lovably goofy and nerdy as Joyce Byers’ boyfriend, and Paul Reiser is simultaneously sweet and unnerving as the new leader of the sketchy government laboratory from which the show’s otherworldly problems stem. Max (Sadie Sink) provides welcome female spunk to the group of kids, and her mean step brother Billy (Dacre Montgomery) is a pitch-perfect 80s high school tough guy.

The show’s production value has increased significantly. “Stranger Things” is the definition of a blockbuster television show, a fact not lost on Netflix. With $8 million per episode, the production team creates stunning sets, cinematography and special effects that rival those of “Game of Thrones,” the industry standard for TV visuals.

The writing of season two is more sprawling and uneven than season one. Characters are separated from each other for large chunks of the season, most notably the superpowered Eleven (Millie Bobby Brown). Her storyline is mostly self-contained, to positive and negative effect. While Eleven has more depth and personality, an all-Eleven episode disrupts the season’s pacing, introduces uninteresting caricatures and seems to be a financially-minded setup for seasons to come. Another substandard plot point of the season is a forced romance that feels unearned and unnecessary.

Luckily, these ill-advised chapters are outliers in an otherwise excellent tale. The dialogue is clever and funny, the characters never act in opposition to their established behaviors and events flow naturally, culminating in a climax that tops the first season and is “Stranger Things” at its best: tons of charming, memorable characters interacting and working with each other in order to save their home.

Overall, the second season of “Stranger Things” lives up to the expectations set by its phenomenon-producing forerunner. It’s fun, exciting and emotional, liberally pays homage to the ’80s while putting unique spins on its cliches and gives audiences more time with incredibly enjoyable characters. While it falters more than the first season, it matches and even tops enough aspects that it doesn’t come close to disappointing. It is everything fans want out of “Stranger Things,” which is all anyone can really ask from a sequel.

Stranger Things 2 is streaming now on Netflix. Watch the trailer below:

The world has turned Upside Down. Stranger Things 2 is now streaming on Netflix. Watch Stranger Things on Netflix: https://www.netflix.com/title/80057281 SUBSCRIBE: http://bit.ly/29qBUt7 About Netflix: Netflix is the world's leading Internet television network with over 100 million members in over 190 countries enjoying more than 125 million hours of TV shows and movies per day, including original series, documentaries and feature films. Members can watch as much as they want, anytime, anywhere, on nearly any Internet-connected screen.