Recap: Soccer falls to Baylor in NCAA first round 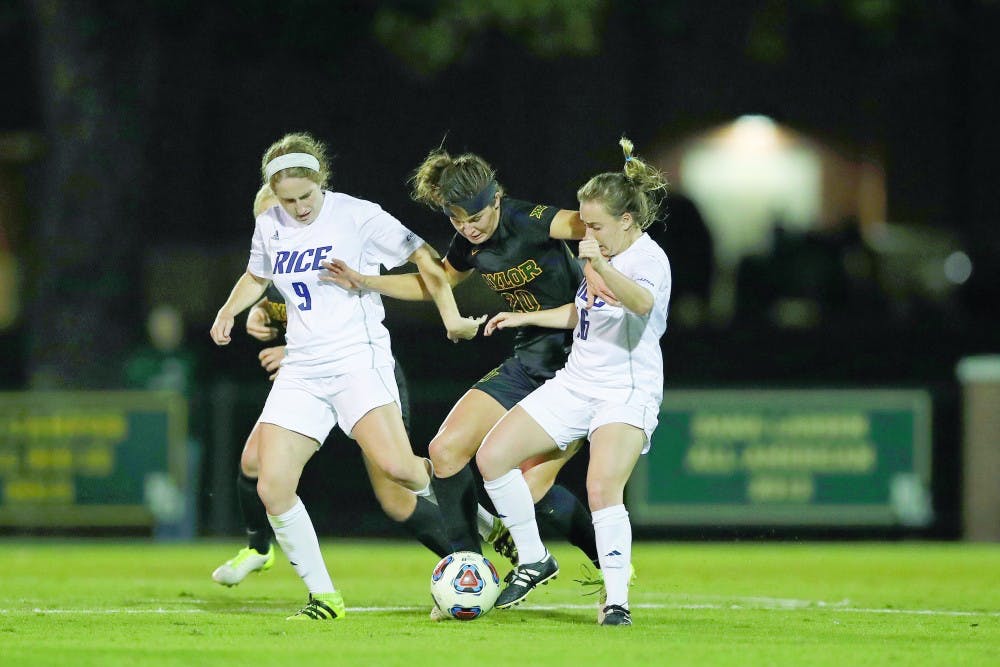 The Rice women’s soccer team concluded their season on Friday night with a loss against the Baylor University Bears in the opening round of the NCAA tournament. The Owls finished the year with a 12-4-2 record.

The Owls started off strong. In the 17th minute, junior forward Marissa Topolski crossed the ball to senior midfielder Aliza Wolfe and then scored with a shot into the right side of the goal. However, the Bears immediately responded with a goal from Precious Akanyirige in the 24th minute and another goal from Aline De Lima in the 25th.

The Owls would not back down. With strong defense, they were able to maintain the one-goal deficit. In the 56th minute, senior midfielder Nia Stallings passed the ball to sophomore midfielder Erin Mikeska. Mikeska then took a shot to the left side of the goal, where it deflected off the post, but snuck past the goalkeeper.

The game was now tied. The Owls were advanced the ball thanks to strong offense from Stallings and senior midfielder Samantha Chaiken. However, they were unable to capitalize on their opportunities. In the 76th minute, the Bears took the lead with a goal from forward Raegan Padgett. The Owls were unable to recover, and Baylor won the game by a score of 3-2.

Overall, the Owls had 12 shots at the goal, compared to the Bears’ 28. Sophomore goalkeeper Maya Hoyer had a total three saves throughout the game. In addition, the Owls had a total of three corner kicks, while the Bears had nine.

According to Chaiken, despite not being able to pull out the victory, she was still proud of the way team played. “I have been honored to play for this team for the past four years,” Chaiken said. “Obviously, we did not get the result we wanted, but I was happy with the effort we put in from the first whistle to the very end.”

Junior midfielder Annie Walker also said that she was pleased with how the team performed.

“There’s absolutely no quitting on this team,” Walker said. “We fought to the very end, and it was exciting.”

According to junior forward Marissa Topolski, the team was incredibly energetic and had a great time facing a skilled opponent. “I would just describe it as fun,” Topolski said. “I think everyone came in with a positive attitude and really wanted to win. It was definitely different from our loss against [the University of North Carolina,] Charlotte.”

With this being her final year at Rice, Chaiken said she was delighted with her senior teammates’ performances these past four years. “I think it’s evident on how the senior class has impacted the Rice soccer team,” Chaiken said. “We were able to get to the NCAA tournament twice, out of the four total that Rice has been [a part of]. I think that’s the legacy we want to leave.”

With the 2017 soccer season completed, Walker said that she’s already preparing for the next season.

“Team chemistry is huge, and we want to keep that up,” Walker said. “We are ready to welcome nine new freshmen, but we want to also keep in close contact with the seniors after they graduate. They’re really good people to have around.”

Walker, the next team captain, said it is a great honor to be named the leader of this team moving forward.

“It’s huge to get named the captain of the team, especially from people you love” Walker said. “Being named captain tells you that your teammates respect you, care about you, and want you in that role.”

Now that the offseason has begun, the Owls will be preparing to do even better than last year. They will be looking to win the Conference USA Championship and earn another bid into the NCAA tournament.