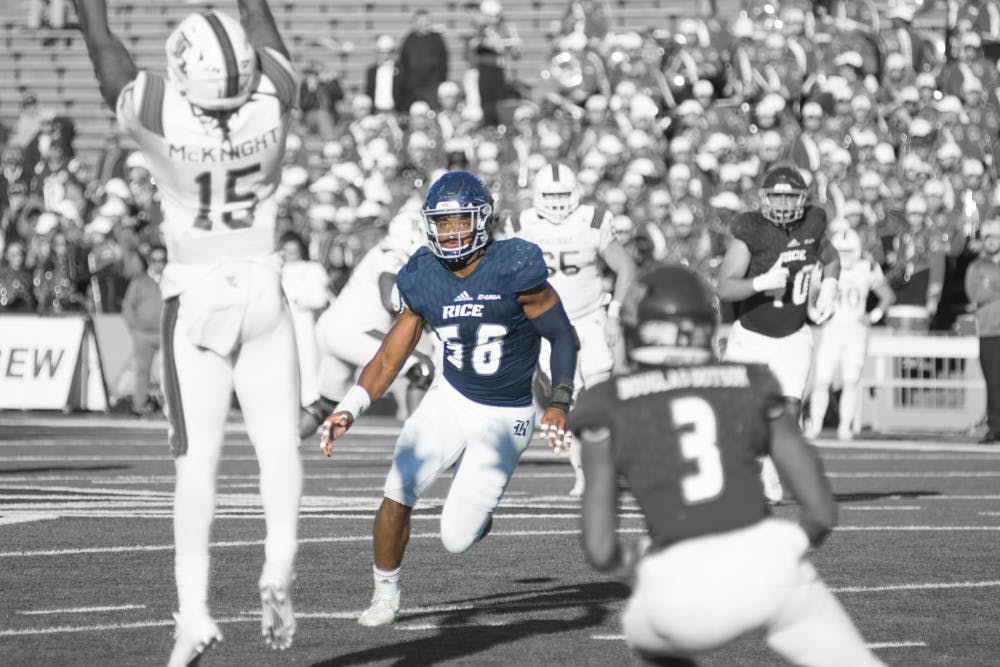 First in Conference USA and sixth in the nation in tackles per game. Second in Conference USA in total tackles. Conference USA All-Academic Honors. These are just some of the many feats senior linebacker Emmanuel Ellerbee has achieved during his career at Rice. With his tenure as an Owl coming to a close, he is hoping to accomplish even more.

“At Strake Jesuit, I learned the importance of hard work,” Ellerbee said. “I learned that it’s going to take a lot of late nights to get [to] where I want to be.”

According to Ellerbee, the reason he decided to go to Rice was due to not only its great athletic opportunities, but also its rigorous academics.

After leading the conference in tackles per game last season, Ellerbee is again at the top of his game. He is second in C-USA in tackles after being named the preseason defensive player of the year. According to his head coach David Bailiff, he has improved even from last year.

“I think that there is just a toughness and a presence about him this year,” Bailiff said. “When you walk off the field (at practice), he’s normally out there trying to do a little extra. He’s probably the hardest working young man in the program.”

Ellerbee has succeeded on and off the field. He is currently majoring in civil engineering and his 3.23 GPA earned him Conference USA academic honors. According to Ellerbee, the civil engineering program has given him many opportunities both academically and socially.

“Rice has definitely allowed to work on being a better people’s person,” Ellerbee said. “Being an engineer and an athlete, you mix two different types of people, so you have to learn how to communicate effectively to those two groups.”

This year, Ellerbee strove to become an effective captain of the team. He said he believes that honesty, encouragement and accountability are the most important qualities that a leader of a football team must have.

“Honesty is important, but encouragement is a big part of it. You have to try to rally people together,” Ellerbee said. “Accountability is also vital. You have to hold people to high standards without ever wavering on your standards.”

With just four games left in the regular season and graduation a few months away, Ellerbee said he has begun planning his future after graduation.

“Obviously, the big one is to graduate from here and get my degree. But we still have plenty of games left so I want to concentrate on those,” Ellerbee said. “I do want to play in the NFL, but if that does not work out, I just want a fiscal life for myself after college.”

According to Ellerbee, one piece of advice he can give to incoming freshmen athletes is to take advantage of every opportunity to meet new people.

“Just because someone might be different than you does not mean they are strange or weird,” Ellerbee said. “It just means they have different way of expressing their ideas.”

Up next, Ellerbee and the Owls are on the road to face the University of Alabama at Birmingham. Kickoff will be at 2 p.m.