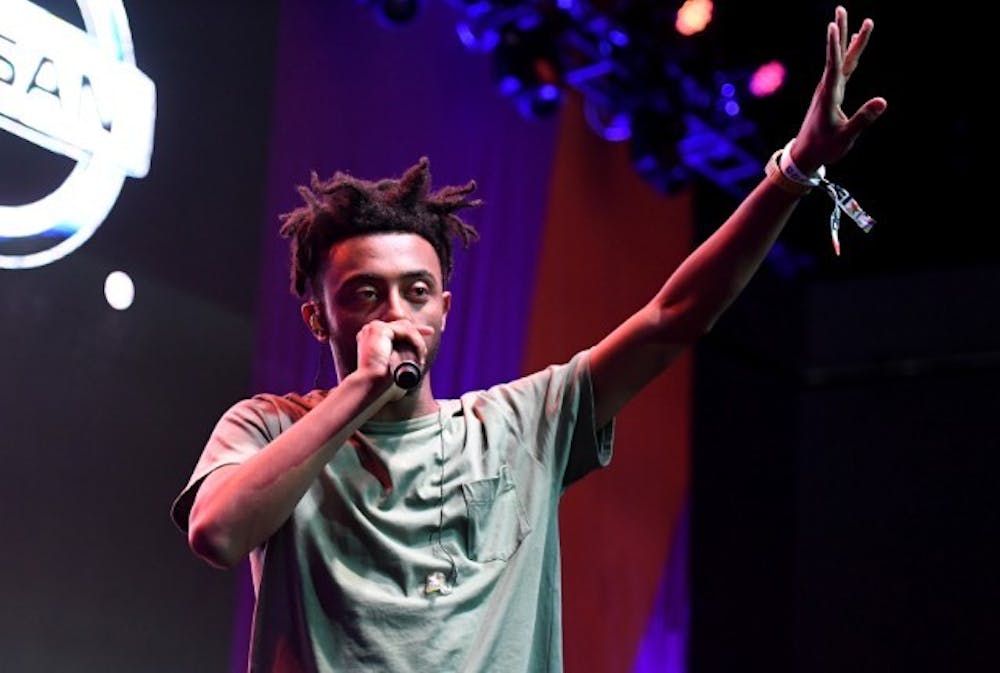 “She’s a ... bad thing.” These four little words worked like magic on me on a summer afternoon in 2016, when I first watched rapper Aminé’s music video for “Caroline.” I’m not sure if it was the charming lyrics, his “Pulp Fiction” T-shirt, or all those bananas, but I was in love.

Along with a growing Aminé fan base, I waited patiently for more music, which finally arrived this past July with “Good for You,” his cheeky debut album filled with flirty lyrics, saucy beat drops and an array of pop culture references. I bought tickets to his Houston show as soon as they went on sale, and finally saw him when he graced Warehouse Live on Sunday, Nov. 5.

Donning braids and a Maserati hat, opening act Towkio started off the show with “Clean Up,” a collaboration with fellow Chicagoan Chance the Rapper. He gave us a taste of his hometown with impressive footworking, a style of dance originated in Chicago, and performances of Chance collaborations “Juke Jam” and “Heaven Only Knows” as well as his more recent songs. Although few audience members were familiar with his music, Towkio gave a lively performance that excited the crowd.

After a short break, a band of musicians in yellow T-shirts filtered onstage, and a cloud-like blowup of the words “Good For You” came to life behind them. The lights went out and an electric staccato burst through the speakers. In a “Stranger Things” shirt, Aminé took the stage to perform his single “Baba,” a high energy, Ethiopian-infused tune. The song’s infectious liveliness set the mood for the rest of the night.

Aminé followed “Baba” with a groovy mashup of Kanye West’s “Gold Digger” and TLC’s “No Scrubs” before jumping into the “Good for You” tracklist. His energy didn’t falter once as he performed every song on his album. He immaculately bounced between energetic songs like “Beach Boy” and “STFU” and mellow tunes like “Sundays” and “Turf.” He made up for a lack of Kehlani during their dreamy collaboration “Heebiejeebies,” and taught us to pronounce his name right with his song “Hero.” For the record, it’s “uh-mee-nay.”

Aminé is a born performer. The quaint Warehouse Live stage became his own personal trampoline where he leapt and bounced all night long. He held eye contact with audience members as we yelled familiar lyrics in unison, and he interacted with us between every song. A proponent of self love, he led a call and response in which he yelled, “You’re beautiful!” to which we responded, “I know!”

About halfway through the show, he announced that it was time for Houston to leave its mark on his “tour pants,” a pair of pants with a patch for every city he’s performed in. Every hand went up as he scanned the audience for someone to sign the pants, finally landing on a woman who was one of the first to line up for the show. After careful consideration on stage, she scrawled “Houston MF Texas, Ho” onto a yellow patch.

Aminé’s energy went through the roof during “REDMERCEDES,” a bouncy ode to his Mercedes Benz and lavish life that got the whole crowd jumping. He followed up with breakup anthem “Wedding Crashers” and nailed Offset’s verse in his absence. A bubbly keyboard riff gave way to a familiar beat drop, and every audience member yelled the charming lyrics of “Spice Girl” while bouncing in unison. In a very Aminé fashion, he paid tribute to the ladies themselves by concluding the song with a sample of the iconic Spice Girls hit, “Wannabe.”

The show was clearly coming to an end, and anticipation pulsed through the audience as it dawned on us that there was only one song left. Aminé planted himself behind his mic stand and, staring into a crowd that was ready to burst, set off an explosion of energy with the lyrics that started it all: “She’s a ... bad thing.” Then he performed “Spice Girl” one more time, because why not?