By replacing the subjects of famous pieces with the figures of her muses, Thomas creates spaces for black women in a context that has traditionally excluded them. 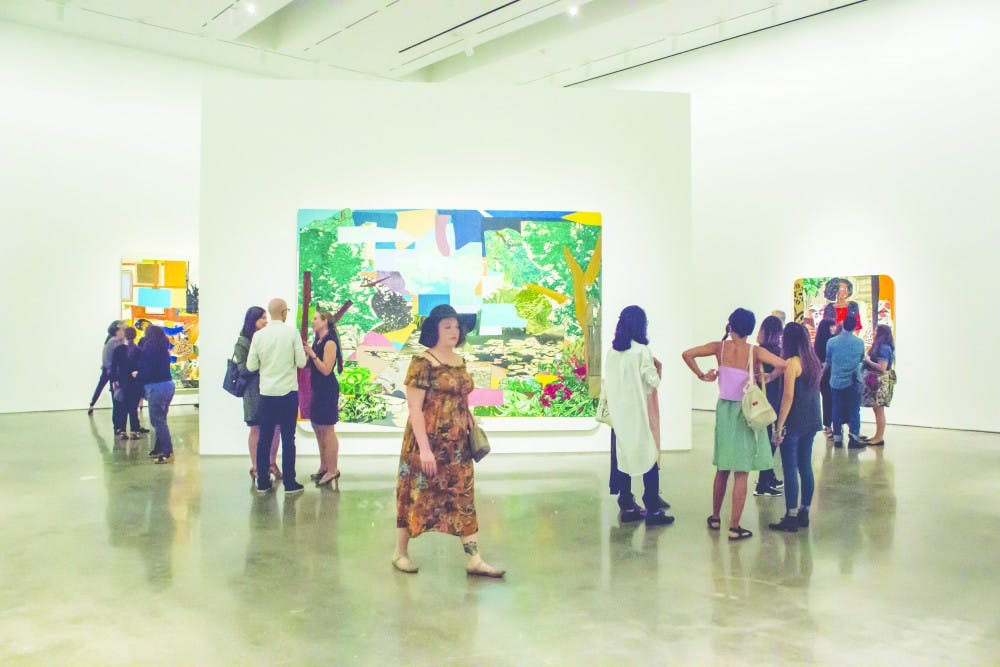 The Moody Center for the Arts’ latest exhibit, “Mickalene Thomas: Waiting on a Prime-Time Star,” opened this Thursday. The first collection to debut since the center’s inaugural selection of exhibitions, its opening was much anticipated and celebrated, as students spent their Friday nights at the Moody’s organized student party commemorating Thomas’ first solo exhibition in Texas. The event was modest, providing a retro soundtrack for ambience as viewers enjoyed light refreshments and each other’s company. The main event, independent of its imperfect exhibition design and inconsistent advertising, did not disappoint.

On first entering Thomas’ installation, the viewer is greeted by a large tableau that seems to occupy the majority of the room’s open space. Vibrant colors immediately draw the viewer in, where they discover the arresting details of Thomas’ interior design, all bathed under the warm glow of lights. Only after having taken in the patchwork of fabrics and household objects can the viewer tear their gaze from the lifelike living room, and survey the two accompanying pieces that are displayed rather haphazardly on neighboring walls.

To experience the remainder and majority of her collection, one must enter an adjacent room, separated by a door. Here, Thomas’ work is arranged in no particular order and viewers are free to wander the space, immersing themselves in the photography, video, collaging and massive wood panel paintings displayed. Thomas’ artistry is partly characterized by its diversity of practice; her final products often involve an extensive process that includes several different media. Thomas often begins by creating an interior tableau and photographing friends within the cultivated environment. She then cuts up the photographs and collages the scraps before creating paintings from the resulting images. The pieces exhibited at the Moody showcase this process, as there are versions of every step of her procedure shown. This detail is lost on viewers, however, as there is no section label to explain this, so they enter unaware of the relationship between the wall of sketchy, small-scale collages and her polished, standalone paintings. Still, despite a divided gallery space and a lack of accompanying information, Thomas’ collection stands out in its singularity of intent. It resonates in its utter cohesion.

Moody’s webpage lists identity, sexuality and power as three thematic concerns of Thomas’ work; while these are evidently fundamental to Thomas’ work, it is not until one enters the Moody itself that black womanhood in particular is mentioned. To advertise the collection without this specification seems inauthentic, as it is clear that Thomas’ artistry is an ode to black women. Thomas’ mother and friends serve as her subjects and their frequently recurring images foster a sense of intimacy and trust that arises from their shared identity. With sequined afros, a Diana Ross record and ornate acrylic nails, black feminine imagery is arguably the most important component of her work. Thomas is no doubt all too aware of the mainstream consumption of black culture and seems to claim agency in the depiction of black aesthetics. She turns, in particular, to interiors, creating environments that reflect the less-appropriated manifestations of black culture. The result is a generous repetition of several overarching motifs that draw on unapologetic animal prints, bold rhinestone detailing and bright colors, all combined with a keen eye for design to create environments that toe the line between authenticity and realism; the pieces simultaneously depict an idealized, abstracted truth and hint at the depiction of an already existing world.

Thomas’ work is also very clearly influenced by her close study of art history; nods to artists such as Gustave Courbet and Claude Monet can be found throughout the exhibition. By replacing the subjects of famous pieces with the figures of her muses, Thomas creates spaces for black women in a context that has traditionally excluded them. Thomas not only recognizes black beauty and its need to be represented in the fine arts, but as the artist behind them, she can truly celebrate black women without exploiting their images. Moreover, her particular approach of collaging and bedazzling subverts the conventional methods of the artists she references, asserting her presence as a black woman within the context of art history, one whose practices seek to dialogue with, not emulate, the classics.

Though her work relies on the past in its classical allusions and interior design, there is a decidedly contemporary tone to the collection, a feeling supported by the fact that American singer-songwriter Solange’s 2012 album, “True,” uses a commissioned collage from Thomas as its album art. As one surveys the collection, they witness something true and whole as Thomas investigates the virtues of black womanhood introspectively, exploring the power, solidarity, and art that exists within the community.