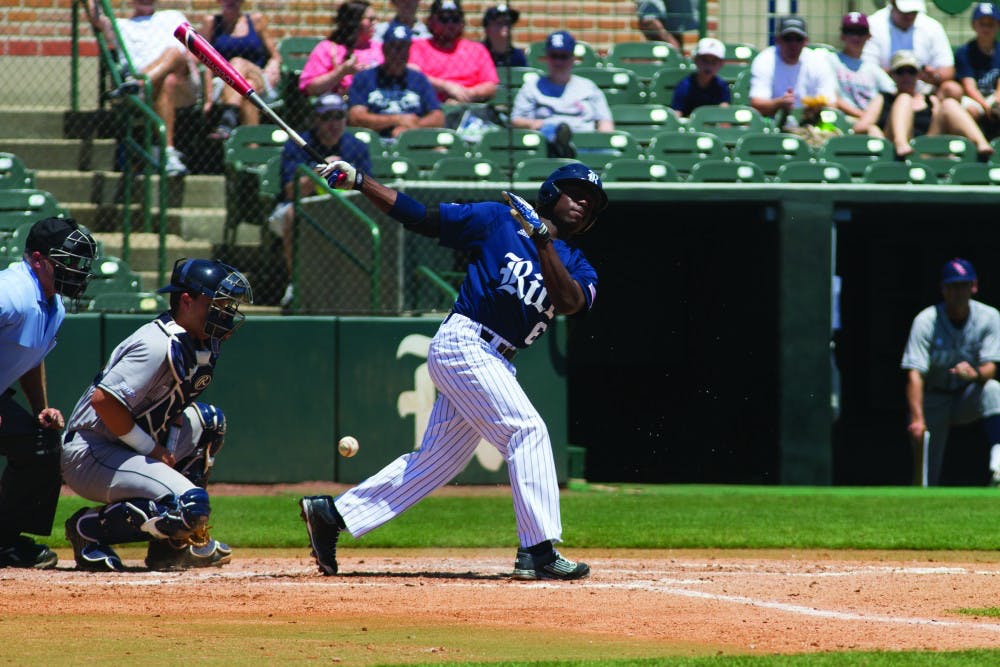 Senior outfielder Ryan Chandler fouls a pitch into the dirt during an afternoon game. Chandler, who was named a Freshman All-American by Collegiate Baseball Magazine in 2015, will look to lead the Owls to a 24th straight NCAA Tournament appearance and a berth in the College World Series this season.

Twenty-three straight seasons. That’s how many years Rice baseball has made it into the NCAA Division I Baseball Tournament. The last time the Owls missed the postseason, nearly all current Rice undergraduates weren’t even alive. The streak looked doomed last year before the Owls won 18 of their final 22 regular season games to win the conference title and qualify for the tournament again. This year’s crop of Rice baseball players will try and extend that decades-long streak for one more year.

Head Coach Wayne Graham, who is in his 26th year at the helm of the team, said he thinks that Rice has restocked with some quality talent that can help in that quest.

“I think we’ve got great recruits that came in, that really kind of fit what we needed,” Graham said.

Along with several freshman recruits, such as infielder Trei Cruz and catcher Justin Collins, Rice added third baseman and sophomore transfer Braden Comeaux, who Graham said, “had a great year in junior college.” But even with fresh talent, Rice’s path to the postseason is no cakewalk, as its schedule is littered with long road trips and matchups against highly-ranked teams.

Rice opens the season with 10 of 11 games on the road, mostly against teams that had winning records last year. The Owls start their road trip Feb. 16-18 with a visit to the University of Central Florida to play against Samford University, UCF and the University of Virginia. After a one-game trip home to face Texas State University in the home opener on Feb. 20, the Owls will switch coasts and travel to Stanford University in repayment for a four-game homestand against the Cardinal last season. According to sophomore Matt Canterino, the Stanford series will be particularly telling.

“Going back and showing that we can compete with [Stanford] again, that will be really important, especially early in the season,” Canterino said.

The Cardinals finished last season ranked No. 17 in the nation. According to junior catcher Dominic DiCaprio, the key to Rice’s success in the series hinges on the Owls’ offensive capabilities.

“[Stanford has] a couple good arms,” DiCaprio said. “It's going to be a test of [whether] our bats can match up with their bullpen and their starters.”

The Owls’ first home series of the season will be from March 2 to March 4 against Houston Baptist University. Their final nonconference series is a four game set at home against Gonzaga University from March 9 to March 11.

“It's a tough baseball league,” Graham said. “We are the sixth highest rated league in the country.”

Looming on the horizon is the University of Southern Mississippi, who came into the new year attempting to replicate their success after ranking No. 11 in the country and hosting a regional last year. The Owls will take on the defending regular season conference champions in Hattiesburg, Mississippi from March 30 to April 1. Graham said the Golden Eagles will be one of Rice’s top challengers for the conference crown.

“Southern Miss will be good again,” Graham said. “They recruit well, [so] they get a lot of good players out of Mississippi.”

But beyond the talent on the Golden Eagles’ squad, Southern Miss poses unique challenges. Senior outfielder Ryan Chandler said he has had that series circled on his calendar because of the crowd he knows the Owls can expect.

Ready and loaded for the upcoming season, Rice baseball awaits the sunny days of spring and the season opener on Feb. 16. According to Graham, the team is optimistic that it can continue the momentum from last season’s second half tear.

“We think we have a chance to do something,” Graham said.