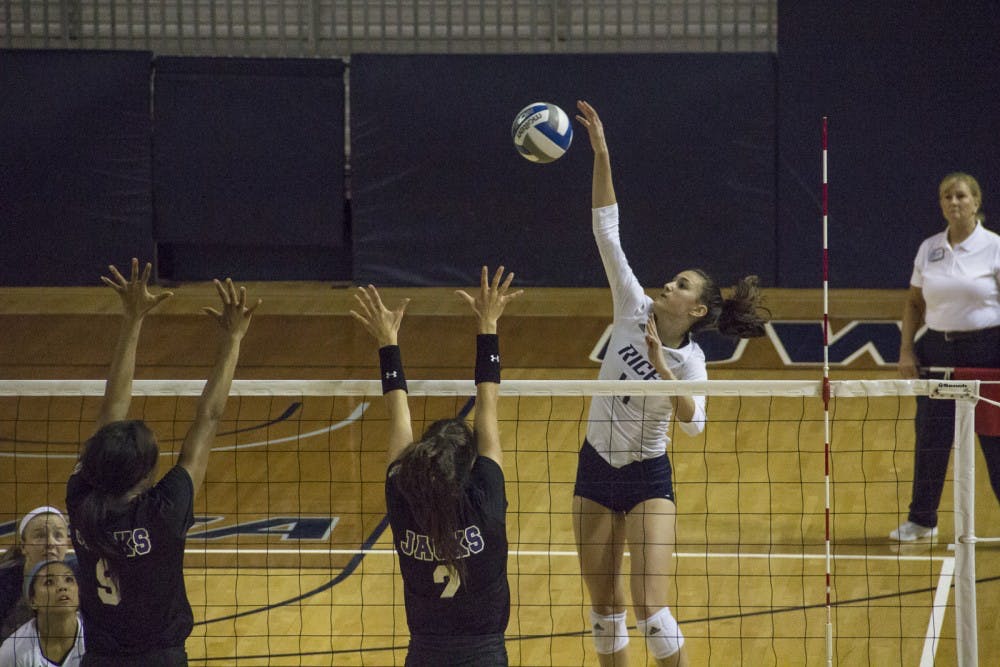 Freshman Nicole Lennon tries to get the ball over the block during Rice's 3-2 win over Stephen F. Austin State University on Saturday. Lennon earned the Rice Adidas Invitational II Tournament MVP Award for her performance over the weekend. Photo by Jasmine Zhou

Two hundred and fifty wins. Head coach Genny Volpe reached this milestone in the second match of the Rice Volleyball team’s Adidas Invitational II with a 3-1 victory over Georgetown University. When asked about the accomplishment, though, Volpe said her players and assistant coaches deserved the credit.

“When I reflect on it, I have just so much gratitude for everyone that has been a part of the Rice volleyball program,” Volpe said. “It’s definitely not my thing. It’s about all the players who have played before me and my assistant coaches.”

The Rice women played three matches over the course of the weekend, with a 3-2 win over the Arkansas State University Red Wolves and a five-set victory over Stephen F. Austin State University, in addition to their victory over Georgetown. Despite not having freshman Seyvion Waggoner, who had accumulated 105 kills over the first 11 matches of the season, the Owls banded together to win the weekend tournament. Sophomore Lee Ann Cunningham said the tournament victory is a sign of the team’s resilience.

“It really is a testament to our character,” Cunningham said. “We were able to pull together and string together three wins in the same weekend, even though we have injuries going on.”

According to Volpe, freshman Nicole Lennon played a major role in responding to challenges within the invitational.

“Lennon certainly has been a strong factor for us all season but I thought she really stepped it up this weekend,” Volpe said. “We gave her a lot of sets and she took a lot of swings and she passed a lot of balls and played some great defense. I was probably most impressed with her defense this weekend.”

Lennon earned a double-double in the Owls’ victory over the Red Wolves as she racked up 20 kills and 17 digs, providing both offensive and defensive production. Lennon continued her production against Georgetown and SFA, finishing with 64 kills and 37 digs over the course of the tournament. Lennon’s efforts did not go unnoticed, as she was named the Adidas Invitational II MVP and named to the all-tournament team. She also earned the C-USA Freshman of the Week Award.

Other players made significant impacts this weekend as well. Cunningham and sophomore Adria Martinez were also named to the All-Tournament team; Martinez totaled 41 digs in the tournament while Cunningham totaled 75. Volpe said Martinez proved to be a leader in crucial situations throughout the tournament.

“Martinez did an awesome job,” Volpe said. “She went out there with a ton of confidence. I am sure she was nervous with it being her first time to run the offense for three matches in a row. She did a great job. She did what I asked her to do. She followed the game plan and also added a lot of energy to the court.”

“Our [nonconference schedule] has been really beneficial to us,” Volpe said.“We have not played one single match that has not been challenging.”

The Owls open conference play on Sept. 22 with a match against the University of Texas, El Paso at the Don Haskins Center in El Paso as they begin the climb toward 300 wins for Volpe.