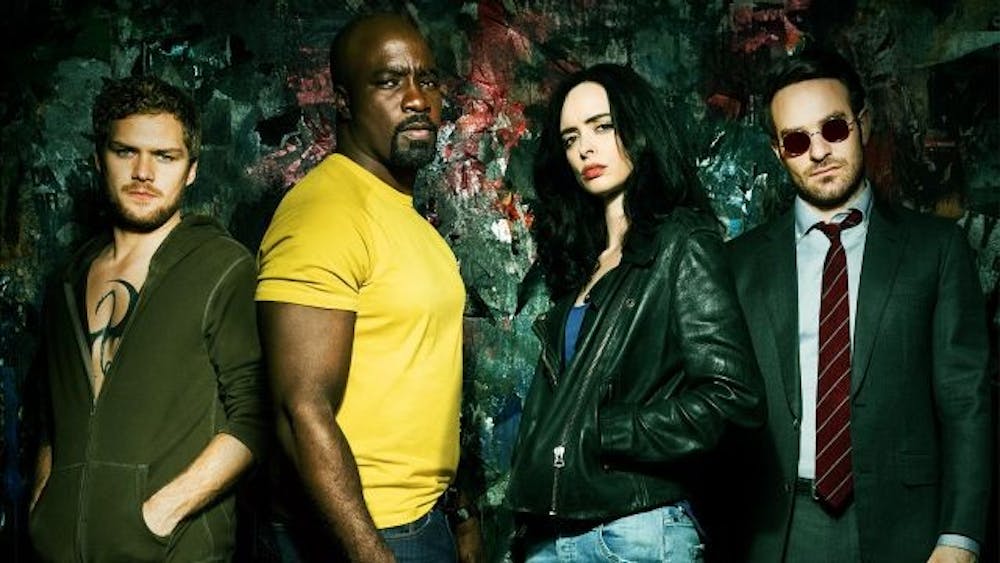 Since the launch of “Daredevil” two and a half years ago, fans have been anticipating Marvel’s new series “The Defenders,” which brings together superheroes Daredevil (Charlie Cox), Jessica Jones (Krysten Ritter), Luke Cage (Mike Colter) and Iron Fist (Finn Jones). In the interim, these characters went on their own adventures in their own shows, each varying greatly in tone and quality. When they all come together in “The Defenders,” does the team meet expectations? Unfortunately, it doesn’t exactly live up to the hype.

The show begins by reintroducing our heroes, letting us know their whereabouts since their own shows aired. Through an array of wild circumstances, the four characters are brought together to prevent the mysterious, ancient organization The Hand and their leader Alexandra (Sigourney Weaver) from destroying New York City. They must avoid run-ins with law enforcement as well as dangerous figures from their pasts.

The most successful scenes of “The Defenders” are those in which they play off of one another, both verbally and physically. Seeing the sardonic Jessica Jones chatting with the serious Matt Murdock/Daredevil and witnessing kung-fu master Danny Rand/Iron Fist going toe-to-toe with the unbreakable street warrior Luke Cage is exactly what fans hope for from these types of crossover projects à la “The Avengers.” This is partially due to the excellence of the actors, specifically Cox, Ritter and Colter. Perfectly cast in their own shows, their acting skills shine through. Finn Jones does not fare as well; while this is partially due to the writing, he seems as serious as possible every moment he is on screen and fails at making you believe in the underlying emotions and motivations of Danny Rand/Iron Fist.

This is especially problematic considering Iron Fist is maybe the most crucial hero to the conflict of “The Defenders,” as the villains are most closely associated with him. This lack of believability also befalls The Hand. Their plans are never properly explained, and their motivations are so weak that caring about the problems they cause is tedious. For example, Alexandra is so underwritten that even a Hollywood legend like Sigourney Weaver cannot escape her inherent mediocrity. Villain Elektra (Elodie Yung) also utterly underwhelms — not even her previous appearance in the second season of “Daredevil” can buoy her inconsistent, bizarre behavior.

Other than Elektra, the effectiveness of returning side characters varies in terms of how much they are given to do as well as how interesting they are. The best returning non-main performance is Stick (John Glenn), who is as awesomely gruff and wise as he was in his appearances in “Daredevil.” At the end of the spectrum is detective Misty Knight (Simone Missick) from “Luke Cage,” not for her actor’s performance but for the role she is given within the context of “The Defenders.” Her main function is as an annoying legal obstacle that prevents the heroes from doing their jobs, and she contributes nothing substantial or entertaining, no matter how much screen time Missick is given to demonstrate her natural charisma.

Overall, “The Defenders” is a show that I would only recommend for avid fans of the Marvel superhero shows on Netflix. People who want to spend more time with their favorite characters will be happy to get the chance to do so here; seeing all these heroes spend time interacting with each other will make this audience even more pleased. However, the show does not function well as its own story. It is quite fun to watch in specific moments, but the writing and execution as a whole do not nearly match the level of these glimpses of greatness.

'The Defenders' season one is streaming now on Netflix.