Arcade Fire flounders on 'Everything Now' 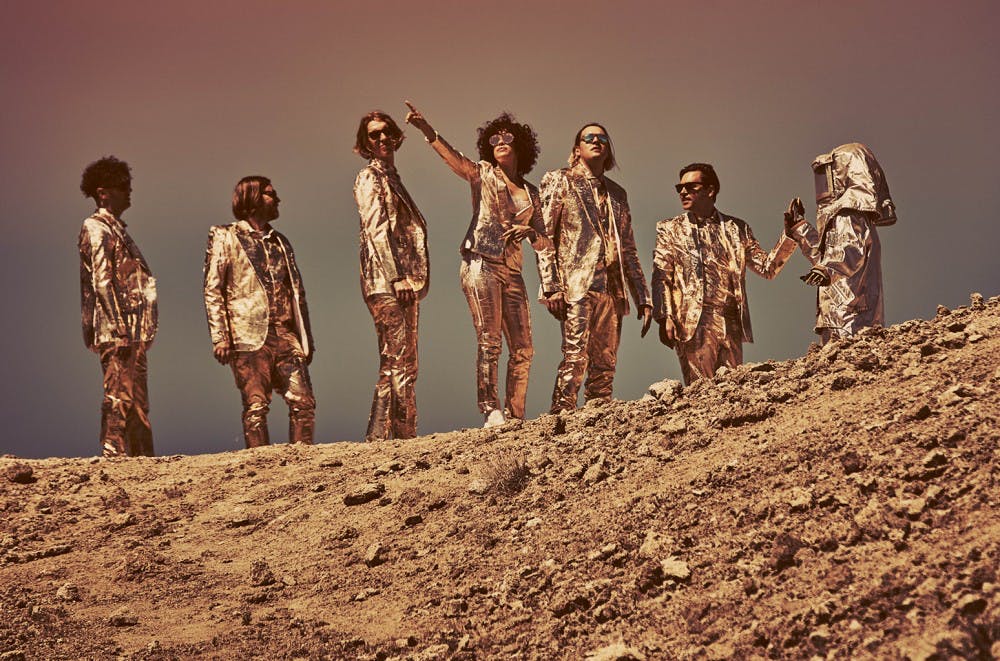 Since their near-perfect first album, “Funeral,” in 2004, Arcade Fire has produced consistently excellent music that tackles the existential pain familiar to us all with skill and energy. Their grand statements have commanded the spotlight with an almost unparalleled sincerity and finesse. On their latest album, “Everything Now,” the group’s seemingly inextinguishable creative spark has dimmed. Their anger is hollow and confusing. It’s highly performative, straying from a previously internal and organic feel. Rather than speaking for its audience, it speaks pedantically to it, lecturing instead of championing.

“Everything Now” represents a dramatic drop in quality of both content and production. With the collaboration of producer James Murphy, frontman of LCD Soundsystem, their previous album, “Reflektor,” maintained a kinetic groove that propelled the album. “Everything Now” strives for the same but falls painfully flat. “Chemistry,” perhaps the album’s worst track, features lead vocalist Win Butler performing relentless iterations of the same grating chorus over a plodding tuba.

More disappointing than the production are the lyrics, which struggle to maintain the righteous emotion that invigorated past albums. The themes are too unoriginal and condescending to be anything more than pretentious. Previously, the drama of Arcade Fire’s music has provided emotional catharsis. Authenticity made their music electrifying rather than melodramatic. One got the sense the group would perform with the same verve whether or not anyone was listening. They were willing to deliver their best lines just once and trust they would be heard and understood on their merit. Now, they insist on beating the listener over the head with every half-baked scrap of wit they can cook up. Never before has their message been easier to understand, and never before has Arcade Fire been more bent on driving it home.

They’ve spread such a small amount of inspiration so thin, you don’t have to look further than the track list, which contains not only “Everything Now” but also “Everything Now (continued)” and “Everything_Now (continued),” for evidence. “Monday, Tuesday, Wednesday, Thursday, Friday, Saturday, sometimes Sunday/Love is hard, sex is easy,” Butler moans condescendingly from a committed relationship whose security he’s been lucky enough to enjoy since he was a teen. The album features a mix of lackluster social commentary that scolds their audience rather than commiserating with them, and love songs devoid of the urgency and truth that used to come effortlessly. It’s difficult to hear criticism of superficiality coming from a band that spent the weeks leading up to the release of “Everything Now” glued to Twitter delivering a stream of inscrutable and largely unfunny attempts at promoting the album.

Still, glimmers of the old Arcade Fire provide hope that the band may be able to put this misstep behind them. The track “Everything Now” is a classic Arcade Fire anthem, channeling a Dancing Queen-like spirit to decry the excesses of society. Additionally, “Creature Comfort,” despite drifting dangerously near the same traps that marred the rest of the album, hits on genuine emotion at times. “Some girls hate themselves/Hide under the covers with sleeping pills and/Some girls cut themselves/Stand in the mirror and wait for the feedback,” sings Butler.

Arcade Fire is at its best when it can channel its anger at a worthy target. When they hit the mark, it’s revolutionary and inspiring, but the lack of direction on “Everything Now” feels like an abandonment of their fans. Their condemnation hits indiscriminately: Before, Arcade Fire was a beacon for those who felt socially isolated, now it’s Arcade Fire against the world. It’s a strange stand at a time when the band has never been more popular, resounding with listeners that feel similarly disenchanted. Personally, I think they had it right with in “Creature Comfort” with “Born in a diamond mine/It’s all around you but you can’t see it.” Their sudden misanthropy is deaf to the encouraging fact that their success is a testament to the notion that though we may feel we’re the only one yearning for authenticity in a superficial world, we are not alone.