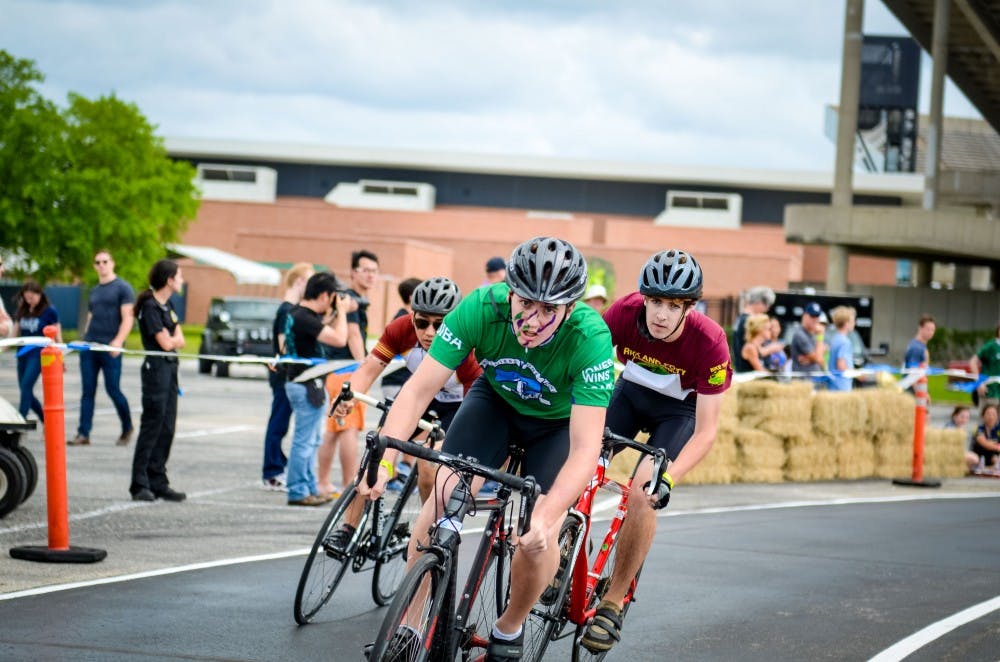 Several bike team captains and one float builder have called into question the 2017 Beer Bike results released by Rice Program Council on April 5. Martel and Brown Colleges have filed appeals of the men's race results while the Graduate Student Association has filed an appeal of the women's results. Meanwhile, Jones College float builder Matt O’Gorman said Jones would have placed third rather than fourth in the float contest had their highest score from the judges not been thrown out, but the campuswide Beer Bike coordinators said they removed this score because it was an outlier.

Losey said he believes the timers for Martel, Brown and Hanszen Colleges recorded the cool-down laps of each team’s final biker as part of the total time, leading to a discrepancy between RPC’s results and what he saw as the finishing order. RPC’s results place Brown in fifth, Hanszen in sixth and Martel in seventh.

“The last biker doesn't finish in the pit, they finish on the race lane and coast a fourth lap,” Losey, a junior, said. “We think for [Martel, Brown and Hanszen], the judge unfortunately stopped their watch when the anchor rider came into the pit after that fourth lap, [which is also] a slow lap because it was coasting.”

Losey believes the timers for Jones, GSA and Baker College recorded times correctly, creating the official gap between those teams, which finished first, second and fourth respectively, and Brown, Hanszen and Martel.

“We think if everything were assessed correctly [Martel] should end up fourth,” Losey said. “It will be difficult for the campus coordinators to say, ‘Not only are we instituting this other order, we're going to reinstitute penalties based on what we believe to be finish times even though we're not sure about it.’ Unfortunately what may happen is they would reinstitute the raw finish order and for this year, leave it at that without assessing penalties.”

Losey provided a picture he said supported his conclusion, showing bikers for Baker, GSA and Martel entering the main straightaway of the race. He said GSA was about to finish the race and Martel had one lap left, which he said showed that Martel could not have finished two and a half minutes behind GSA.

The Hanszen bike team initially questioned the results, believing they should have placed fourth or fifth in the races instead of sixth, according to bike team captain Naoki Shiba. However, Shiba said the team no longer stands by their initial claim.

“I don't think we felt it was worth it to contest for places outside of first, second or third,” Shiba, a senior, said.

The Brown bike captains confirmed that they are appealing the race result but declined to comment further until the results of the appeals process are released.

There is no official recording of the races. The only evidence Losey has are photos showing the order of how bikers finished on the track. He said in the future, races should be filmed to avoid uncertainty about the finishing order.

"The issue is there was no race video taken,” Losey said. “Before the race results came out, I had asked the campuswide coordinators about a race video because I thought there might be some discrepancies about penalties".

Ashton Duke and Colin Feng, the campuswide Beer Bike coordinators, said the process for reviewing the appeals involves analyzing the judge’s split times for each rider and seeing if there is a discrepancy in the time of the final rider to determine whether a cool-down lap was included.

“We are still deciding on the best way to correct for the split time discrepancy, but we believe a combination of some colleges' own recorded times, some eyewitness accounts and directly comparing these with the judges split times could help us settle this matter by the end of the week,” Duke, a Baker sophomore, and Feng, a Duncan College senior, wrote in an email to the Thresher. “Then we can announce final official winners.”

GSA women's bike team captain Mary Natoli notified the Thresher that GSA was appealing the women's race results, which placed GSA in third after Sid Richardson and Will Rice Colleges.

Natoli said GSA should technically be credited with finishing the race first, arguing the Sid Richardson team should be disqualified or penalized for entering the pit. She also objected to the handling of the results after the race.

"To add to our skepticism of the results, the initial results took four days to send out, the coordinators have sent multiple emails with 'updated' results and 12 days after the race the coordinators have yet to send out split times," Natoli said. "We think this is totally unacceptable and makes us question whether they are reporting accurate times."

In the float contest, Jones received scores of 47, 38 and 35 from its three judges, which would have placed the college third behind Duncan and Will Rice College. However, Duke and Feng removed Jones’ highest score from consideration, placing Jones fourth behind Hanszen, which received a 37 from all three judges.

O’Gorman, a junior, said he believes the score was removed due to the potential for bias, because it was awarded by Jones’ incoming master Jason Hafner.

“The outliers involve scores that were either nonexistent or vastly different from the other two scores. With that in mind, we were able to score the colleges fairly and also get rid of any potential bias with the judges,” Duke and Feng said.

O’Gorman said he ran a statistical analysis using GraphPad, a website with an outlier calculator, which shows Jones’ score of 47 is not a significant outlier. He said the campuswide coordinators did not run a similar analysis and removed Hafner’s score because it was the point difference of an entire category.

In the official float ranking released by RPC, Jones placed fourth and Will Rice placed second.

Hafner awarded both Jones and Will Rice a 47 score out of 50. During the parade, Duke and Feng said one judge missed the Will Rice float and so Will Rice only had two scores, a 47 and a 36.

“Although the other Will Rice scores were 11 points different from each other, we were forced to average those two scores and then not consider the lack of a score from the third judges because it would have been unfair to pick one of the remaining scores for Will Rice,” Duke and Feng said.

O’Gorman said it was unfair to throw out Jones’ highest score. He pointed out the dropped 47 score for Jones differed by 10.5 from the average of Jones’ other two scores, while there was an 11 point difference between Will Rice’s score of 47 and their other score, a 36.

“The coordinators should not default to removing a score when there are only three judges,” O’Gorman said.

Feng and Duke said they chose Hafner long before they found out he was the incoming Jones master on Feb. 28.

“We were not aware the two positions would be filled by the same person,” Duke and Feng said.

Hafner, who was chosen as Jones master in December 2016, said he tried to remain unbiased during judging.

“I certainly tried to judge floats without bias towards the best college,” Hafner said. “The float judging occurred under highly chaotic conditions, unlike the controlled laboratory environment to which I am accustomed. My scores for second, third and fourth were indeed rather close as I recall, and I suspect the differences were not significant relative to my judgment uncertainty.”

Duke and Feng said their scoring decisions did not affect how colleges placed in the float competition.

“In the end, we didn't change any of the results of the float competition,” Duke and Feng said. “We found a way to make the competition as fair as possible with the information we had. In the future, we are considering celebrity judges from outside Rice and emphasizing to each judge that every college must have a score.”

This article was updated after print publication to include the information that the Graduate Student Association is appealing the women's race results. A description of Losey's picture also incorrectly stated that he said both Martel and GSA were on their final lap; he said Martel had one lap to go.