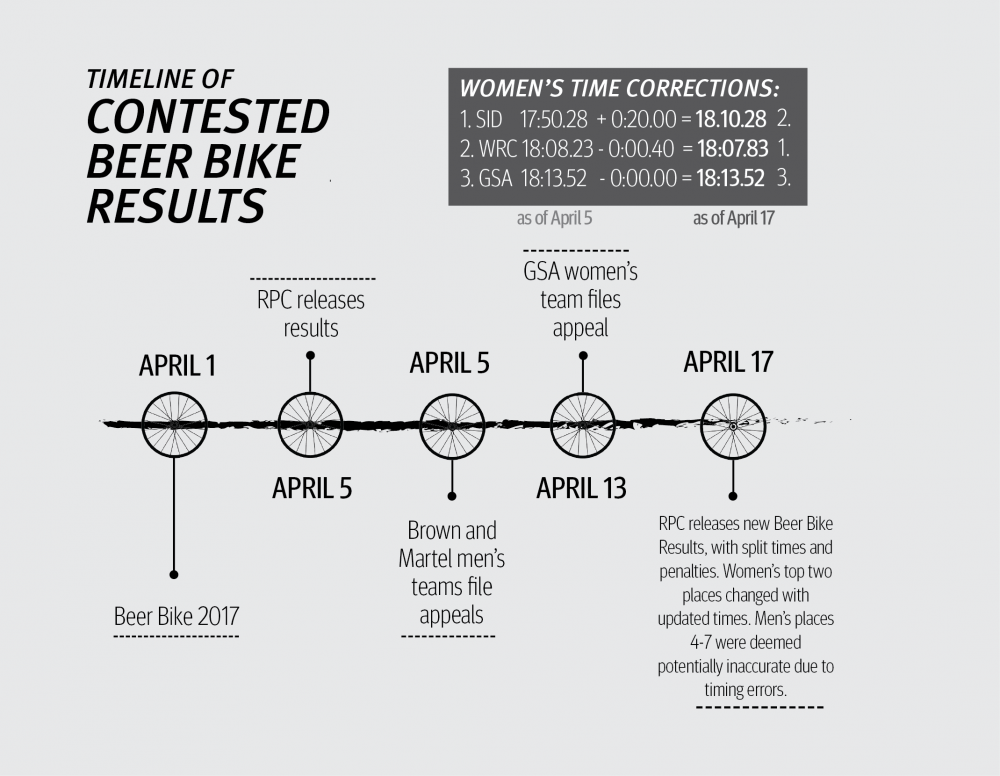 After receiving appeals for both the men’s and women’s bike races, the campuswide Beer Bike coordinators have released updated results they say are final: Sid Richardson College was moved to second place behind Will Rice College for the women’s race, although both teams believe this to be incorrect, and fourth through seventh places were noted as possibly incorrect for the men’s race.

The campuswide coordinators, Ashton Duke and Colin Feng, said the release of final results was delayed by several petitions and resulting investigations.

“What we have learned so far in our investigation is that people’s accounts, vehement as they may be, are inaccurate,” Duke, a Baker College sophomore, and Feng, a Duncan College junior, said in their statement. “That’s not to say the judges are 100 percent accurate either, as we can quite clearly see the opposite. But there comes a point when we must give the judges the benefit of the doubt and just go with what they have down. They may not be correct, but they are the first people to record the results on paper and the last impartial people we have left to rely on.”

The time excluding penalties for the Sid Richardson women’s team was misread to be 20 seconds faster than the actual time when the initial results were released, according to a statement from Duke and Feng. The corrected final time with penalties moved Sid Richardson to second place and Will Rice to first place. Despite an appeal from the Graduate Student Association, Sid Richardson was not disqualified for finishing in the pit area.

In a statement posted on Facebook, Sid Richardson bike captain Meg Brigman said the individual rider times list Will Rice and GSA finishing 2 and 3 seconds behind Sid, respectively, but that spectators and bikers could see that Sid Richardson was ahead by a much more significant margin.

“If the coordinators are going to ignore the testimony of the countless people at Beer Bike, the credibility of Beer Bike is worthless,” the statement, which was written by Brigman and the other Sid Richardson captains, said. “This is an extremely disappointing outcome for the bikers at Sid who put in countless hours of training, all for it to come down to hearsay in a race that was not even close. [Sid Richardson] is reconsidering competing if there are not significant improvements in the timing or appeals system, as this experience has left a terrible taste in our mouth. We will continue to fight this until the end.”

Will Rice team co-captain Marita Sailor said that she is proud of her team regardless of the result, but does not believe Will Rice got first place.

“After reading Meg Brigman’s post with recalculations and all, I am convinced that Sid won the women’s race and I fully support the contestations made,” Sailor, a senior, said. “They trained extremely hard for this and their win was well deserved.”

Brigman, a junior, said that their final biker finished in the pit area rather than the race lane. The Beer Bike rulebook states that the final biker must finish in the race lane, prompting an appeal of the race by the third-place GSA. However, because the rulebook does not list specific penalties for a violation of race procedures, Duke and Feng said there would be no penalty for Sid Richardson.

GSA team captain Mary Natoli said Duke and Feng did not address their concerns with their decision, including whether penalties were added due to this finish and whether or not Sid Richardson’s final time was recorded at the start or end of the pit.

“Beer Bike is our favorite Rice event of the year — we trained hard, and it is frustrating not to have the race evaluated fairly,” Natoli said. “At no other sporting event are the results in doubt when you leave, much less weeks later.”

Despite appeals from the Martel College and Brown College men’s bike teams, Duke and Feng decided to keep Will Rice College’s third place ranking due to the fact that the times for individual riders recorded by Rice Program Council judges matched those provided by Will Rice.

Brown team co-captain Ben Rasich said that the final results were a step in the right direction, but that Will Rice’s third-place result should have also been thrown out.

“We definitely agree with throwing out a good chunk of the results, we just don’t think they went far enough,” Rasich, a junior, said. “We don’t think that there’s enough evidence for third place to be included in the results.”

The Brown and Martel teams alleged that an extra cool-down lap was added to the time of their final bikers. After reviewing the appeals from both teams, Duke and Feng stated Brown and Martel’s times for the final biker deviated from the rest of the bikers on each team.

Martel co-captain Colin Losey said while he does not blame Duke and Feng, he believes Martel should have placed fourth in the men’s race and that the lack of an official result is demotivating.

“The school absolutely needs people to bike for this tradition to continue, but it's going to be harder to motivate people to bike when something like this happens,” Losey, a junior, said. “Perhaps most importantly, I think it's just the height of stupidity that the races aren't filmed. My God, it's 2017, why are we relying on eyeballing the race, flags, stopwatches and pencils and clipboards.”

Brigman said ultimately, the official results do not matter.

“One important thing is that Sid is proud and wants to be recognized for our win — but at the same time we don't want to be seen as a college that takes Beer Bike incredibly seriously and honestly just want to comment on the process of how the races are recorded, rather than the outcomes,” Brigman said.

Duke and Feng said they recognize that the decision may not please everyone, but hoped everyone would understand their perspective and side of the process.

“We’re left to clean up the aftermath but we can’t undo anything,” Duke and Feng said. “We’ve gotten a lot of blame, hate, and other remarks after Beer Bike on every aspect of the event you can think of, but there’s only so much we can do. We did our best to make this the best Beer Bike possible and no matter what happens, we are honored to have been your campuswide coordinators for the 60th anniversary of Beer Bike.”