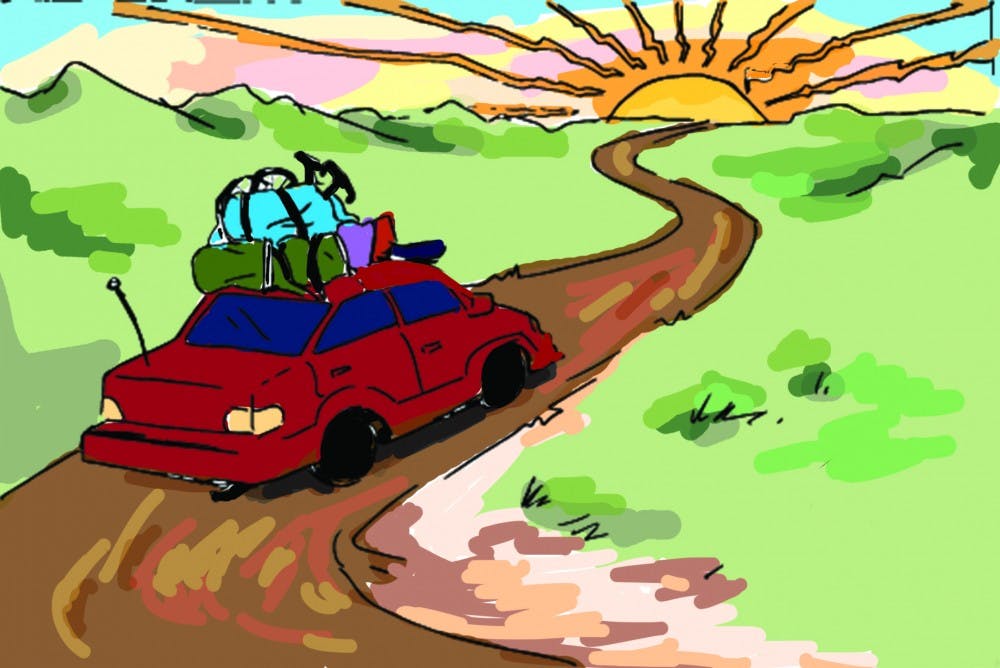 It took five hours to fly to Seattle, and then five days to drive back to Houston. That was my first road trip; a taste of the Americana, because not many places in the world have roads long enough. To put it another way, I imagine the distance we covered each day could have been a circumnavigation of my country, Taiwan.

All the expectations I had came from the movies. I notice the road trip movie is one that covers a lot of ground, so to speak. They range from 90s buddy film “Tommy Boy” to existential noir “The Hitch-hiker;” from popcorn joyride “Smokey and the Bandit” to pensive character study “Scarecrow.” As I began this journey I wanted to see how my experience would compare to the road trips of cinema.

Road trip movies ultimately sell road trips as a restorative force, promising to unite any unlikely pair This was the one trope I intentionally sought to observe in practice. I embarked on this trip with my father, and if we were to have cinematic representations of ourselves, my father would be Buzz Lightyear and I would be Hamm.

In buddy film“Tommy Boy,” Tommy is a lovable fool and Richard a sarcastic nerd. In my favorite scene, Tommy and Richard are fighting over the radio dials until they bumped into a channel they both like, although they would rather not admit it to each other. Jump cut to the two of them bellowing out lyrics to The Carpenters’ “Superstar,” tears streaking down their cheeks.

Turns out karaoke also works in the real world. The best decision I made during the trip was to purchase an Aux cord. I introduced my dad to the up-and-coming Taiwanese artists, and he took me down his memory lane of the Bee Gees, The Bangles and Abba.

A good road trip movie allegorizes that about-the-journey-not-the-destination aphorism, and that is made literal on-screen through arbitrary deadlines, hard-earned character chemistry and anticlimactic destinations. “Smokey” follows through with the most hilariously streamlined version of this template where a Mr. B dares The Legendary Bandit to smuggle beer from Texas to Georgia in 28 hours. Characters immediately spark, and an Indiana Jones-style finale ships the characters off to Boston.

Of course, real life was a little slower than life in the films. My mind played a funny trick on me as we were driving along. I felt like I was always seeing changes in the scenery, but never seeing it in the process of changing. It’s like when a train passes through a tunnel, the surroundings become another world after that brief lapse of darkness.

For a few hours it would be the rain and hills of Seattle, then all of a sudden it was the snowing summits of the Rockies. We would pass through a terrain of cattle and crops, and then be hit by the redness of the Utah sandstone arches. The only constants were the road, the other cars, and my routine. Sometimes I would talk, but other times I would let the ambient hum of the truck immerse me as I consider how I would overtake the vehicle ahead. It felt peaceful.

All that said, that is the one thing that I have yet to see captured on-screen— the sheer expanse of the American land. “The Hitch-hiker” came close by using wilderness to heighten the hostage situation with a sociopathic hitchhiker. But even though it looked intense to be driving with a gun pointed to the head, I imagine there must have been moments where both hitchhiker and hostage forget about the gun, and get lost in thought over the landscape of the road.

During the trip I was taken aback by how we were traversing along mere hairs that ran across the scalp of the land. Just like how the legacy of the Roman Empire is carved in the geometry of modern-day Europe, people will remember America for its land and its roads.