Cost of attendance to rise 3 percent next year 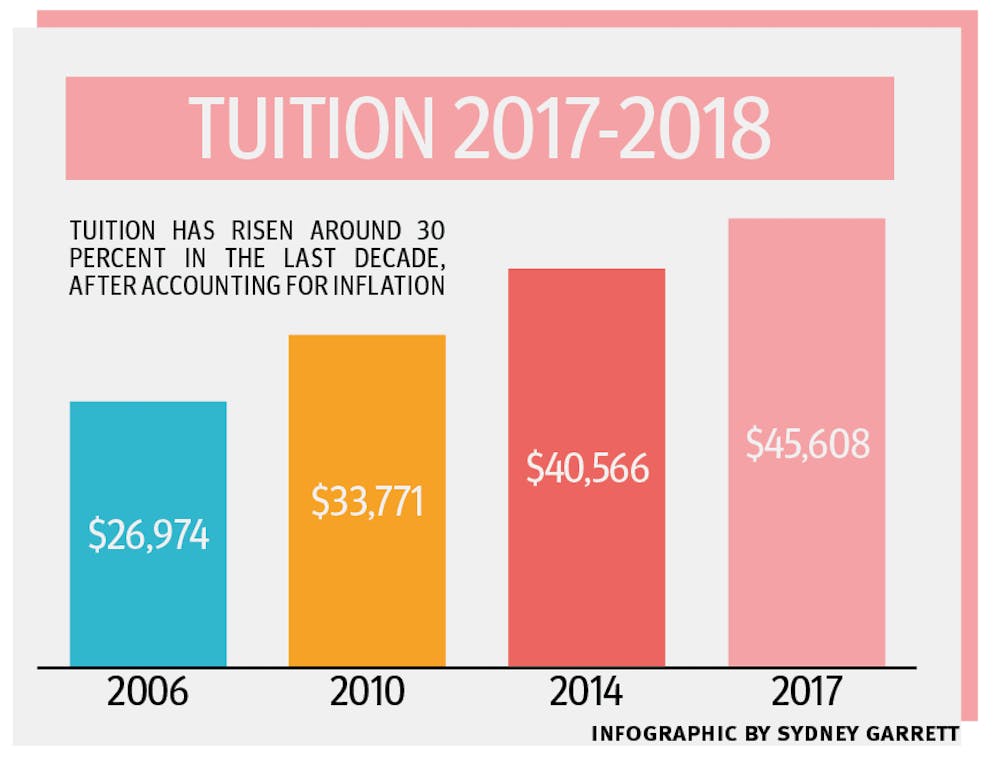 The total undergraduate charges for attending Rice University, including tuition, mandatory fees and room and board, will increase 3.1 percent to $59,458 for next school year, according to Vice President for Finance Kathy Collins. While the cost is the highest ever, its rate of increase was smallest in at least a decade.

Total costs to attend the university have risen nearly 30 percent since 2007, a rate similar to many other private universities. Collins said that the administration has aimed to reduce the rate of increase each year and that the Board of Trustees has been supportive of that goal, though she said she could not predict whether the trend would continue.

"It's really hard to predict the future increase," Collins said. "But we do understand the importance of predictability both to family budgets as well the university budgets."

The Board annually approves a range of increase for the administration to decide on — 3 to 4 percent this year — and will ratify the final charges at its March meeting.

Beyond the tuition hike, Collins said financial aid will rise to cover other increases in the total sticker price, which reflects total charges plus predicted spending on textbooks and personal expenses. She said the amount for books will increase from $800 to $1200, for example, allowing full scholarships to reflect what she said may be a more realistic cost prediction for some students.

Collins said Rice still has low tuition and total cost compared to most universities of similar caliber. Rice is less tuition-dependent than many of its peers, she said, because the endowment covers a relatively high percentage of costs, about 40 percent.

According to Collins, another cost that the administration has targeted for reduction is mandatory fees that are not covered by tuition. Since President David Leebron arrived in 2004, she said fees have been reduced to those for the recreation center, student health center and student activities, including blanket tax.

“Controlling the growth in fees has been a really important principle as well as keeping down the growth in sticker price,” Collins said.

Collins said university costs rise each year along with revenues from the endowment, tuition, the annual fund and overhead recovery.

"Two-thirds of our budget is compensation, faculty, staff, support for graduate studnets, hourly wages for student workers, benefits,” Collins said. “Every year we add to the library budget. This year we've opened the Moody Center — when you add buildings, you add operating costs."

Collins said faculty recruitment can also be a source of increasing costs.

Anne Walker, the director of the Office of Financial Aid, said over 400 returning Rice students who completed their financial aid paperwork before Feb. 1 have financial aid packages ready as of this afternoon. The timeline is accelerated from past years, in which returning students did not receive packages until June, due to the early availability of the Free Application for Federal Student Aid (FAFSA) and College Scholarship Service (CSS) Profile, Walker said.

“We know that some students might have questions, and we will respond to questions about packages after we finish processing the new freshman class,” Walker said. “We will begin answering emailed questions starting May 1."