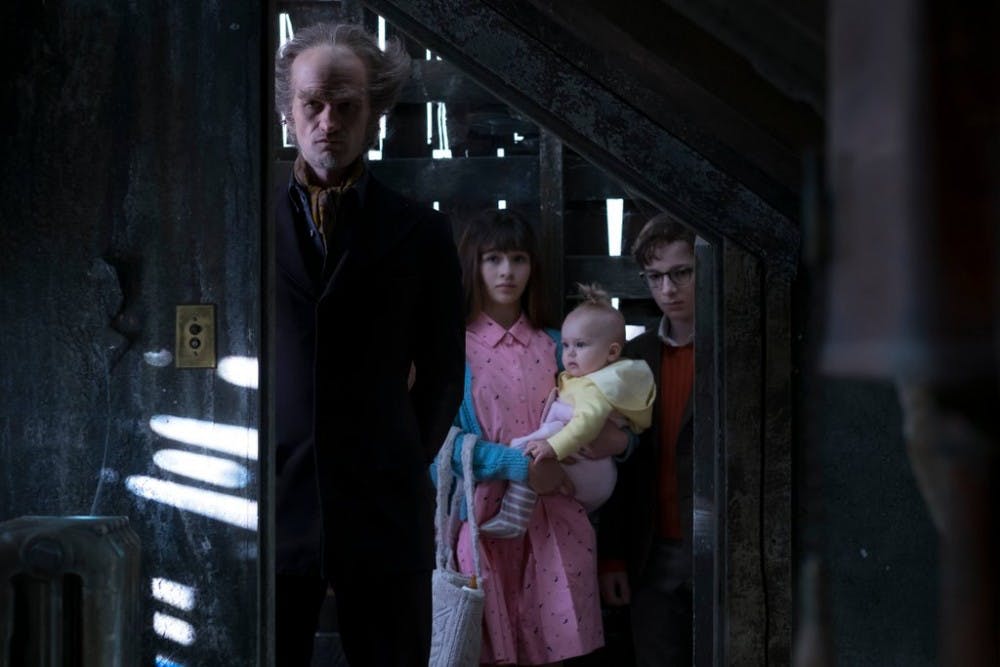 Based on the acclaimed children’s book series and following the derided movie adaptation of the same name, “A Series of Unfortunate Events” returns to the screen in an eight-episode first season on Netflix. Covering the first four novels with two episodes dedicated to each book, the show’s initial season succeeds as a faithful adaptation of its source material. However, inconsistent casting and humor keep the series from reaching its full potential.

For those unfamiliar with the series, the story follows the misadventures of siblings Violet (Malina Weissman), Klaus (Louis Hynes) and Sunny Baudelaire (Presley Smith) in their search for a proper guardian following the death of their wealthy parents. Thwarting the children’s pursuit of a home is the villainous actor Count Olaf (Neil Patrick Harris), who, along with his theatrical friends, attempts to capture them for their enormous fortune when Violet turns 18. These “unfortunate events” are narrated by Lemony Snicket (Patrick Warburton), whose backstory and connection to the Baudelaires is mysterious.

The show shines in its production design, creating an look that is simultaneously bizarre and believable. From Count Olaf’s decrepit house to Uncle Monty’s room of reptiles, the series’ settings vary wildly yet remain consistent with the surreality of the story’s universe. The cinematography also stands out as dynamic, continuing Netflix’s tradition of shows that feel like movies. The show’s vibrant style is assisted by director Barry Sonnenfeld of “Men in Black” fame. Sonnenfeld directs half of the season’s episodes and serves as executive producer for all of them, demonstrating a level of inspiration that he has not shown of late. Sonnenfeld was originally attached to the film adaptation of the book series before leaving the project due to creative differences, and it’s clear he was right to save his vision for the small screen.

Another key figure (also not involved in the movie) is book series author Daniel Handler, aka Lemony Snicket. Handler is credited with writing five of the season’s eight teleplays and he heavily exerts his influence over the other three as well. Handler’s extensive involvement ensures a loyalty to the novels that surely will please fans of the book series, though he does make a number of small changes that might annoy purists. However, these changes have no ill effect on the show’s story, which is one of the series’s strongest aspects. Oftentimes, they actually improve and add depth to situations and characters that could otherwise come across as one-dimensional. Handler’s plotting of these “unfortunate events” is precise and well-paced, never shirking on backstory nor delving too deeply into a specific plotline.

Where Handler does mishandle the adaptation of his material is in some of the humor, which often caters too heavily to a younger demographic. While the books were indeed written with children in mind, their overall darkness offset the sillier aspects for more mature readers. In the show, the tone is mostly comedic even when the viewer is told that things should be taken seriously. While a number of the jokes such as Sunny’s eloquent subtitles for her babbling are quite funny, just as many gags aren’t. From cartoonishly dumb characters to ill-fitting meta references, the writing gives a sometimes confused tone to the proceedings. This dilemma is not helped in any way by certain casting choices.

Neil Patrick Harris, known mostly for his comedic roles, here attempts to ride a fine line between sinister and goofy but leans farther towards the latter. While he succeeds in portraying Olaf’s theatrical personality and lack of acting ability, he struggles to come across as imposing. This is partially due to his immediately recognizable voice, which he does not change in any way while playing Olaf. For people like me who were used to seeing him as Barney Stinson on the sitcom “How I Met Your Mother,” this might be an issue in drawing you into his supposed villainy.

Other than Harris, the show’s casting is quite good. Weissman and Hynes are decent in the lead roles of Violet and Klaus, and Warburton is excellent as Snicket. The show also has a bevy of great guest stars, including Aasif Mandvi, Joan Cusack, Don Johnson and even Will Arnett and Cobie Smulder as “Father” and “Mother.” All of these actors fit the characters they are given, and they all lend their weight to the series. Overall, “A Series of Unfortunate Events” is a show that will please book readers and possibly delight children but prove more difficult for older audiences to enjoy. The series has many superb qualities and provides decent entertainment, but the show could have been of higher quality if executed differently. I hope next season “Unfortunate Events” learns from its mistakes and becomes as good as TV series as it was a book series. It certainly has the potential.