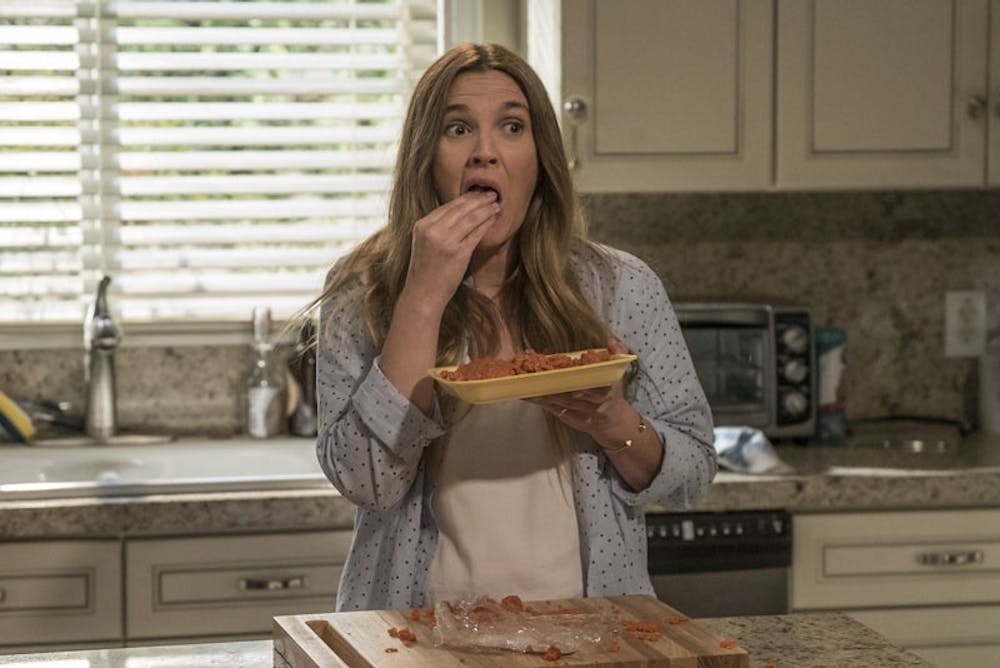 From “The Walking Dead” to “World War Z,” zombies have infested the cultural landscape in a big bad way in the last decade. While it’s an interesting premise in a vacuum, its over-exposure often makes new zombie fiction unintriguing or dull. With the first season of its new show “Santa Clarita Diet,” Netflix has sidestepped this dilemma without a hitch. Putting new twists on both traditional zombie stories and family sitcoms, the show crafts a story of immensely likeable characters in remarkably absurd situations, all to entertaining effect.

“Santa Clarita Diet” follows married couple Joel and Sheila Hammond (Timothy Olyphant and Drew Barrymore), along with their daughter Abby (Liv Hewson), as they learn to cope with Sheila’s transformation into an uninhibited, undead woman who must feed on human flesh. Unlike the traditional zombie, Sheila is exactly the same in both mental and physical capabilities as she was when alive. It is her candor that alters greatly, a more character-based take on the zombie transformation than audiences are accustomed to seeing.

Arguably the series’ strongest quality is its cast, which boasts all-around excellence. Olyphant shines as Joel, comically portraying the character’s conflicting feelings of constant exuberance and anxiety. Barrymore is well cast as Sheila: Her somewhat stilted, wild cadence actually fits flawlessly due to her role’s untamed nature. However, the standouts of the show are probably Hewson as Abby and Skyler Gisondo as her nerdy neighbor and friend Eric. The two actors have top-notch chemistry to match their characters, as Abby’s increasingly reckless behavior and Eric’s general awkwardness around both Abby and her family’s otherworldly new problem combine beautifully.

The show’s aesthetic also aids in establishing the darkly comic feel. On the surface, the California settings, beautiful actors and unoriginal cinematography all seem to belong more on a network soap opera a la “Desperate Housewives” as opposed to a Netflix zombie show. However, this seemingly cheap style makes the incredibly bloody moments of the series all the more impactful and satisfying. By placing cartoonish violence into familiar environments at opportune times, the show gets big reactions and thereby big laughs.

The series’ storyline does not stand out as much as its talented cast and unique twist on common TV and zombie tropes, but it functions well enough. While the show does somewhat succeed in its attempts to establish its own mythology, it most excels when focusing on the characters and their relationships rather than the basic zombie storylines. How would being a zombie affect your mood? Your appetite? Your sex life? It is when addressing smaller, more personal questions such as these that the show truly stands out among the glut of supernatural series that are produced today.

“Santa Clarita Diet” meshes the family sitcom and the gruesome zombie genres to create something refreshing and entertaining. Its game cast of characters makes even trite plot lines watchable and its distinctive look at life of the undead is undoubtedly interesting. It is fun, and makes for a good time when you’re in the mood for something to watch. If you’re looking for laughs and have a strong stomach, then I recommend watching “Santa Clarita Diet.”