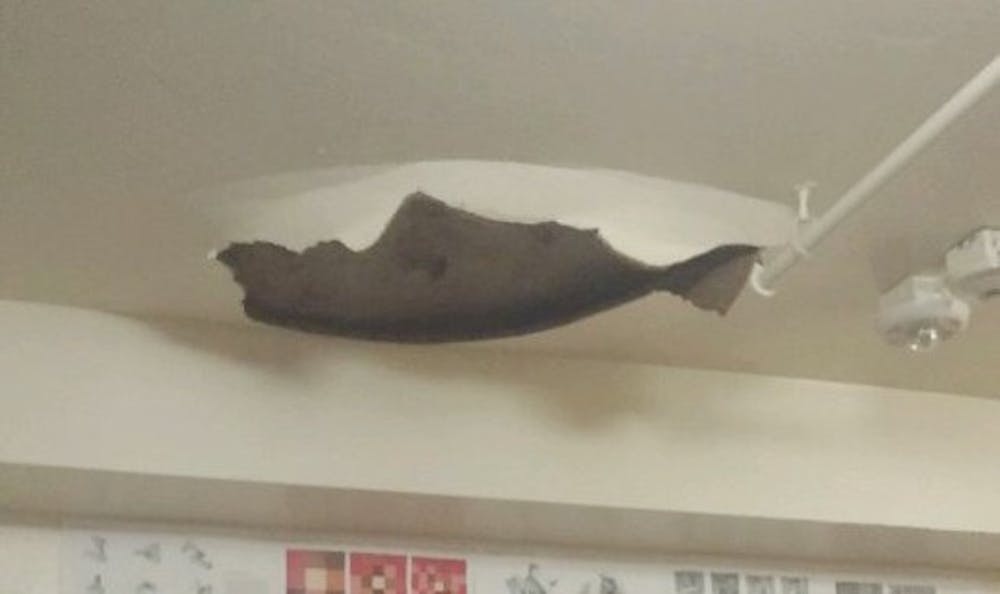 Across campus, students have been experiencing partially caving ceilings, potentially scalding water and other structural problems at various residential colleges.

Rice University Housing and Dining has implemented temporary fixes and is working on long-term solutions, according to Department of Housing and Dining Senior Business Director David McDonald, who said the weather related damage seen at Will Rice is often unpredictable.

“To have a few issues in a few hundred square feet out of a million and a half is not unheard of and we hate when it happens, obviously, but we can’t predict everything and we respond to it in kind,” McDonald said.

Students were forced to evacuate parts of Will Rice College’s old dormitory early last Wednesday morning after parts of the fourth floor ceiling fell in and leakage occurred throughout the building during a heavy rainstorm. H&D permitted students to return to their rooms the same day and expects repairs to be finished by the end of the week.

“Will Rice, that was just a perfect storm,” McDonald said. “We believe this occurred due to a clogged drain outside on the deck of the fifth floor. Once this was cleared, water was draining normally. We are going to have a roofing consultant take a look at the deck.”

Students were evacuated by RUPD around 7 a.m., but leaking had begun by 5:30 a.m., according to Will Rice freshman Jake Lesher, who lives on the fourth floor.

“I woke up to the sound of what I thought was rain, but after a moment, I realized it was coming from inside the room and the roof was leaking,” Lesher said. “I got out of bed and started cleaning it up with a towel when chunks of plaster started falling from the ceiling. Mud and dirt covered everything.”

According to H&D, the heavy rainfall also caused leaking in the commons of Jones College.

One of Lovett’s buildings, colloquially termed “Stinky Leebron” by some students, experienced extreme water temperatures for a week last semester. Daniel Faraldo, a Lovett junior and a resident of Stinky, measured the water temperature with a thermometer and found that it was 151.7 degrees Fahrenheit. According to a report prepared by professors at Harvard Medical School, two seconds of exposure to 151 degree water can cause second and third degree burns. According to McDonald, 125-130 degrees is the standard range for maximum water temperature.

Faraldo, one of 28 residents in the building, said the water ranged from extremely hot to extremely cold. He also said that the hot water problem was not fixed for a week and the scalding heat made showers unsafe.

“After numerous emails to H&D, they stabilized our water temperature but to where it would just be scalding hot all the time […] reaching temperatures that we could not be exposed to for any length time, making showering impossible,” Faraldo said.

According to Faraldo, one H&D worker was burned during the repair. He said that although the building’s water pressure issue is being resolved, H&D did not respond quickly despite repeated attempts to contact them.

“[My suitemates] set up a meeting with head H&D people last week and they are planning to run a new water line out to Stinky and the problem should be fixed by the end of the month,” Faraldo said. “However, this is after we sent [around 40] work orders over the course of four months that were largely ignored. Only once the masters got involved did anything get done.”

However, McDonald said the delayed response was due in part to the extensiveness and difficulty of the problem, and that the timing of the student complaint to the Lovett master was coincidental.

On Friday, Duncan College also had problems with its water when there was a drop in water pressure and black sediment came out of the showers.

“After showering I still felt dirty so I tried to wash my face, but the sink water was milky looking so that was a no-go,” Stiles said. “All in all I was fairly annoyed, but not as much as some of my friends whose water was much worse than mine.”

Nick Leisle, Student Maintenance Representative for Duncan, said that nothing similar had occurred in the fall semester.

H&D Senior Operations Manager Brad Thacker wrote in an email that the sediment in the water was the result of computer control, in which Duncan’s redundancy pumps failed to turn on.

“[T]here is a temporary solution in place right now, but you may continue to see some discoloration in the water in the colleges for the immediate future,” Thacker said.

“I appreciate the speed with which a temporary fix was put in place and I hope that this computer malfunction does not occur again,” Stiles said.

Brown College is undergoing renovations after a consultant for H&D determined the grout behind the brick panels on the East and West side of the tower was starting to fail.

“We decided [the panels were] a high enough capital priority that we weren’t going to wait until the summertime to erect scaffolding and take on this project,” McDonald said.

The panel replacement efforts began on January 11, according to an email sent by Brown President Santiago Avila to the college’s residents. In addition to replacing panels, Avila said workers have installed a scaffolding for safety and are adding insulation and water sealing window frames to improve energy efficiency.

According to McDonald, the panel replacements will be completed by the summer, but because Brown is the subject of H&D’s capital project, renovations will continue over the summer with a focus on room renovations.

“[A capital project] most likely means we take a building offline,” he said. “We can go around building to building and we have 11 of them, and so we’re basically at an 11 year cycle.”

McDonald said H&D strives to be open with the Rice community about renovations and repairs.

“H&D prides itself on being very transparent about what’s going on in your spaces - whether it be repair maintenance or your food,” McDonald said. “We try not to hide anything from you. If we did, it’s not on purpose.”