Rice students among thousands of protesters marching for women's rights in Houston, Austin 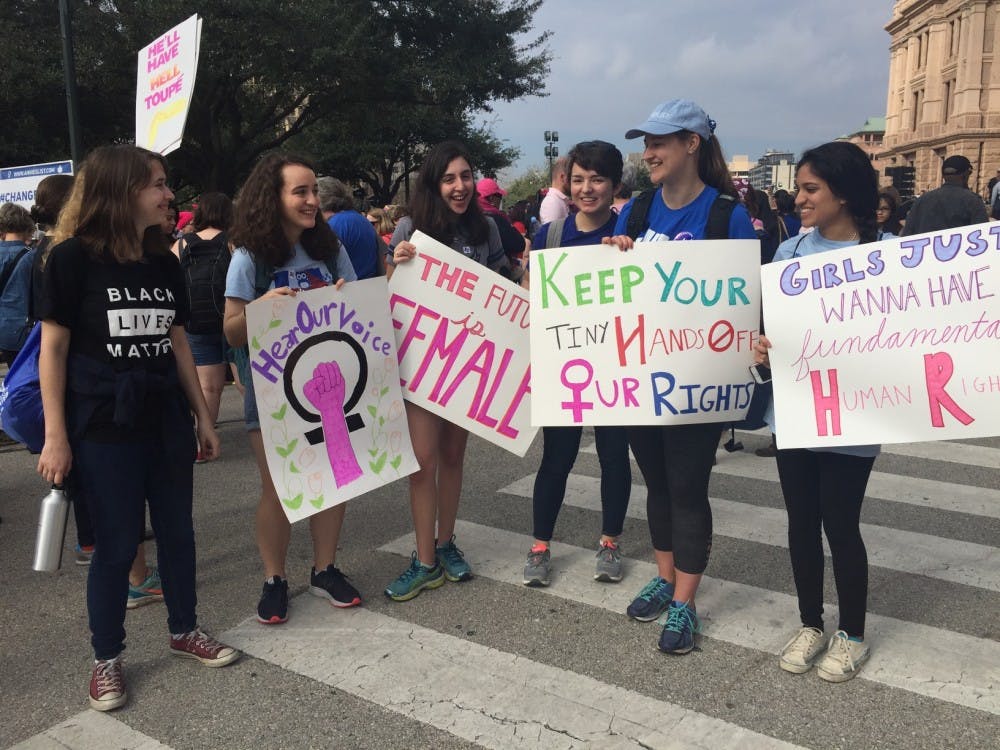 Rice University students and faculty joined thousands marching in the Austin and Houston Women’s Marches last Saturday to show support for women’s rights in light of President Donald Trump’s inauguration. Following the marches, the female residential college presidents launched a Rice for Women campaign to mirror the follow-up activities promoted by the organizers of the Women’s March in D.C.

A group of faculty and staff calling themselves the “Posse of the Positive” organized and partially subsidized charter buses to take students to Austin on the day of the march. Two full buses of graduate and undergraduate students, in addition to several faculty members and their families, made the trip. Both the Austin march at the Texas State Capitol and the Houston march at City Hall were sister marches to the Women’s March in Washington, D.C. Local news media estimated attendance for the Austin and Houston marches at 50,000 and 22,000, respectively.

McMurtry College President Madhuri Venkateswar, who helped faculty spread the word about the bus trip and attended the Austin march, said she saw the event as an important step in political advocacy.

“This sort of event brings the community together and helps people find allies and change. I’m hoping Rice gets less apathetic and moves to advocate for something,” Venkateswar, a senior, said. “That’s my reason for being here.”

According to Will Rice College master and sociology professor Bridget Gorman, the idea for organizing the trip arose early on during discussions between 12 faculty members on how to increase student involvement.

“For me, anything involving women’s rights is super important, and so I had a hard time deciding even what to put on my sign because there were so many things that have just been really wrong,” Gorman said. “I’m very nervous in the next four years about what it’s going to mean for women’s well-being.”

“What I like about [the march] is that it’s symbolic, and we can take pictures and we can maybe engage our community to do other things after this, because it’s going to take more than just this march,” Beier said.

McMurtry senior Michael Robinson said he attended the Houston march as a way to involve himself in a broader social movement outside of campus.

“It’s very easy to get trapped in Rice,” Robinson said. “And it’s awesome to see Houston get engaged because we also see the progress that could happen next and [hear] from elected officials and representatives that actually give a shit.”

McMurtry senior Olivia Lee said she felt the Houston march organizers made an admirable effort in promoting intersectional feminism and including diversity.

“I’m here and I think a lot of people are here because we want to stay angry, and I think that’s the biggest thing right now,” Lee said. “Never let what’s happening over the next four years or next eight years seem normal because that’s when you slip into this complacency.”

Gorman said she believes student turnout for the marches is an indication of students’ desire to create changes within their community.

“I was really pissed off following the election [at] how many people referred to our students as snowflakes,” Gorman said. “You all are not weak little snowflakes. You guys are very strong, and I found that deeply offensive. The response that we’ve had from all of you all — I mean those buses were full, almost all of it was students, and so you guys are great and you are so much more than that. ”

Beier said she expects the march to be part of a broader movement for women’s rights.

Update: full disclosure: Haghdoost and Alem were participants in the march.